A Different Approach to Difficulty

A paradigm shift away from the idea that games should find more and more complex ways to serve players with different skill levels. But rather, they should give players with the tools to cook to their own palate, provided it is a meaningful experience.
Alex Vu
Blogger
October 23, 2018

would like to propose another alternative–not so much a mechanical solution that requires implementation, but rather a different approach to difficulty design.

One thing I’d like to stress is that, this has been applied in various games quite successfully before, and I’ll mention them later on, but not to the extent to which it can deservedly become a central design philosophy, in my opinion. This I presume is due to a lack of a rather clear and deliberate approach to difficulty design.

But first, let me attempt to briefly summarize a few popular criticisms of the traditional difficulty modes approach and its alternative.

Picture yourself coming into a brand new game, only to be asked to choose a difficulty mode that’s suitable for yourself, and presented with a number of different menu options. And frankly, they don’t do that good of a job at giving you sufficient information to make such an important decision. This is how many games in our history have done difficulty, and it continues to be fairly prevalent among modern games. 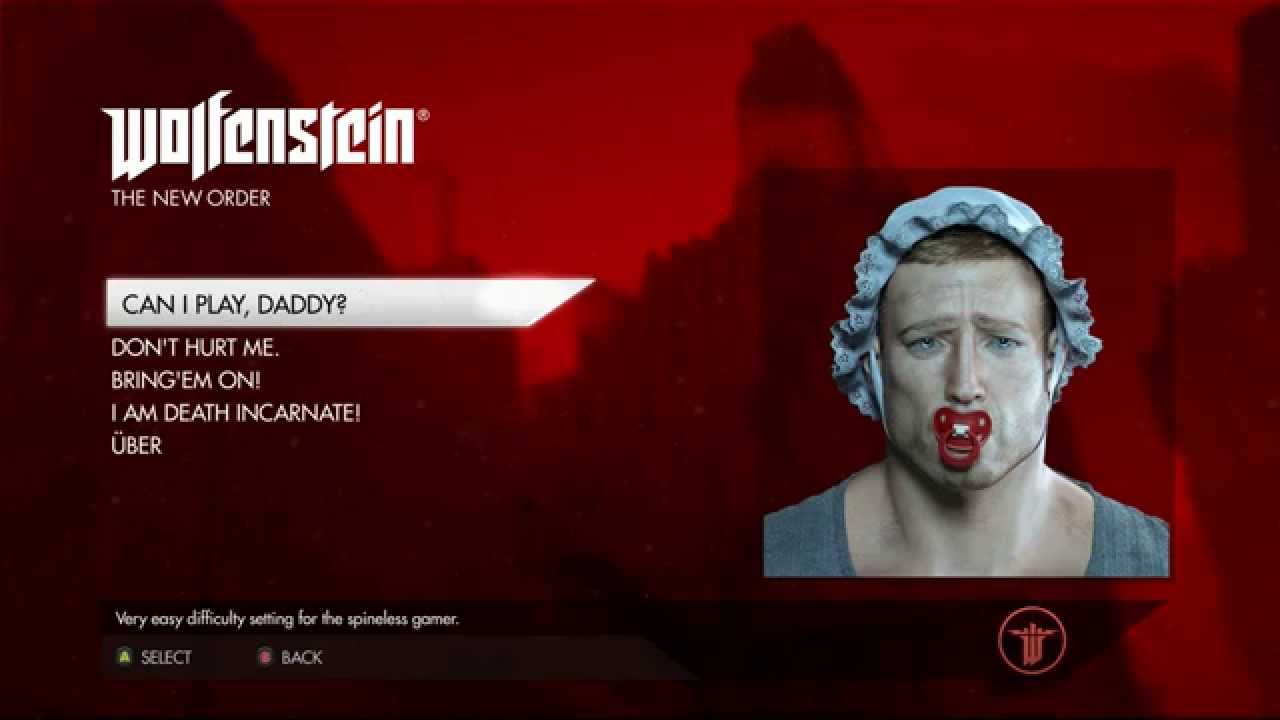 Here are its common criticisms:

There have been several solutions to negate these issues, of which Mark Brown has gone into depths in one of his videos. However, not one of them was able to solve them all and still maintain immersion.

The idea of Dynamic Difficulty Adjustment (or DDA) hinges on the theory of the player’s Flow State, in which the player is completely immersed, and the game’s difficulty feels just right. Any more difficulty will cause frustration and break immersion. Any less difficulty and the player will quickly find boredom, and you guessed it, lose immersion. Therefore, as designer Andrew Glassner put it in his book Interactive Storytelling, games “should not ask players to select a difficulty level. Games should adapt themselves during gameplay to offer the player a consistent degree of challenge based on his changing abilities at different tasks.” Or in other words, games should be implemented with a performance evaluation system as well as a dynamic difficulty adjustment system in order to adjust itself to accommodate the infinitely different and ever-changing characteristics of players. More on the technical details of DDA can be found in Robin Hunicke’s 2005 paper The Case for Dynamic Difficulty Adjustment in Games. 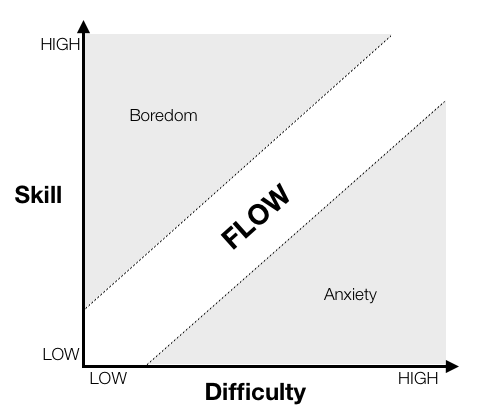 However, while the Flow State theory admittedly has its merits, the DDA approach doesn’t go without its numerous downsides:

There are many interesting and nuanced approaches to DDA that I won’t mention since that’s beyond the scope of this segment. While I imagine there are going to be a lot of way to make DDA functional and sufficiently inscrutable through clever algorithms and implementation, I am rather discussing the fundamentals.

There seems to be a number of different terms to address this approach, but just for this article I’m going to use the term “Organic Difficulty.” This is something that has been tossed around in the last decade or so.

The basic idea of Organic Difficulty is that the game does not ask the players to select or adjust their preferred difficulty via GUI-based commands, nor does it automatically adapt itself to match with the player’s performance and progress. But rather, the game allows the player to interact with it in certain ways to make it easier, or harder, for themselves. These take the form of tools, approaches, strategies, input sequences or methods, etc. which should often come with some sort of trade-off.

This is something that has been implemented in a number of games including From Software’s Dark Souls, which Extra Credits has dedicated an entire episode to, and which everyone should take a look. 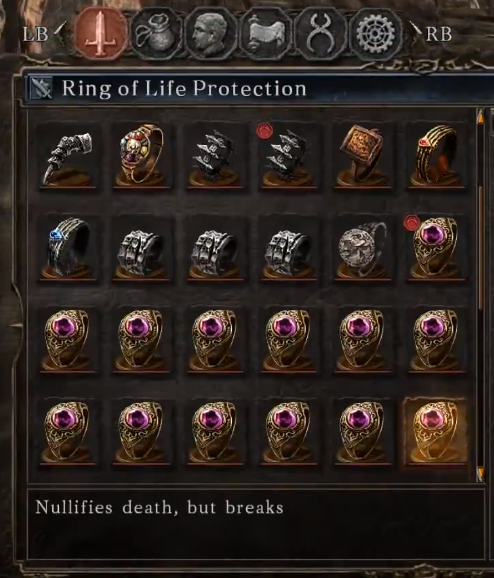 In Metal Gear Solid V, for every mission the player has completed, there’s a score rating system which provides a rough overview of the player’s performance based on a number of factors such as stealth, lethality, accuracy, completion speed, whether the player has completed any mission tasks, and what tools they used. While the player does get minus points for mistakes such as getting detected, raising enemy alert, taking hits, etc. some other factors are not as clear-cut as to how they constitute minus points aside from narrative reasons. The player can always go on a lethal rampage, tossing grenades at everybody in sight, or calling a support helicopter to airstrike the entire enemy base. The player is provided the tools to do exactly all of those, and they’re always just a few buttons away, and the worst they get is a C rank, provided they completed the mission, and a slight dip in their earnings. 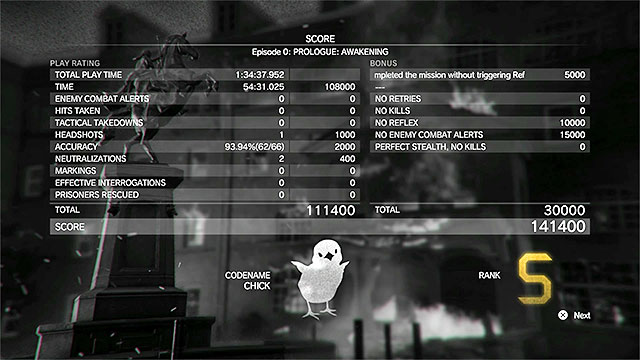 Another example of this can be found XCOM: Enemy Within. There's a "cheesy" tactic in the game that can almost ensure victory, which is to have a unit with the Mimetic Skin ability to safely spot the enemies, thus enabling a squadsight-sniper from across the entire map to pick them off one-by-one safely without any real repercussion. This strategy is extremely effective in virtually every mechanical aspect of combat, with the only risk being that the spotter must not be flanked for they would instantly lose invisibility. The actual problem with this strategy is that it’s incredibly boring: your snipers just simply shoot every turn, and you can only take a few shots every turn, not to mention reloading. This strategy is best suited for beginners and people who have made mistakes and want to get out of the downward spiral. While on the other end of the spectrum, there are players who understand how the game and the AI of every alien unit in the game work, so they are more confident about moving up close and personal with enemies with minimal armor. Because for them, it's not about defending against the enemies, but about manipulating, "nudging" the enemies into behaving the way these players want them to (e.g. nobody needs armor when enemies are only going to attack the tank; nobody needs to take good cover when enemies are too scared to move to flank in front of an Opportunist-overwatch unit; etc.) 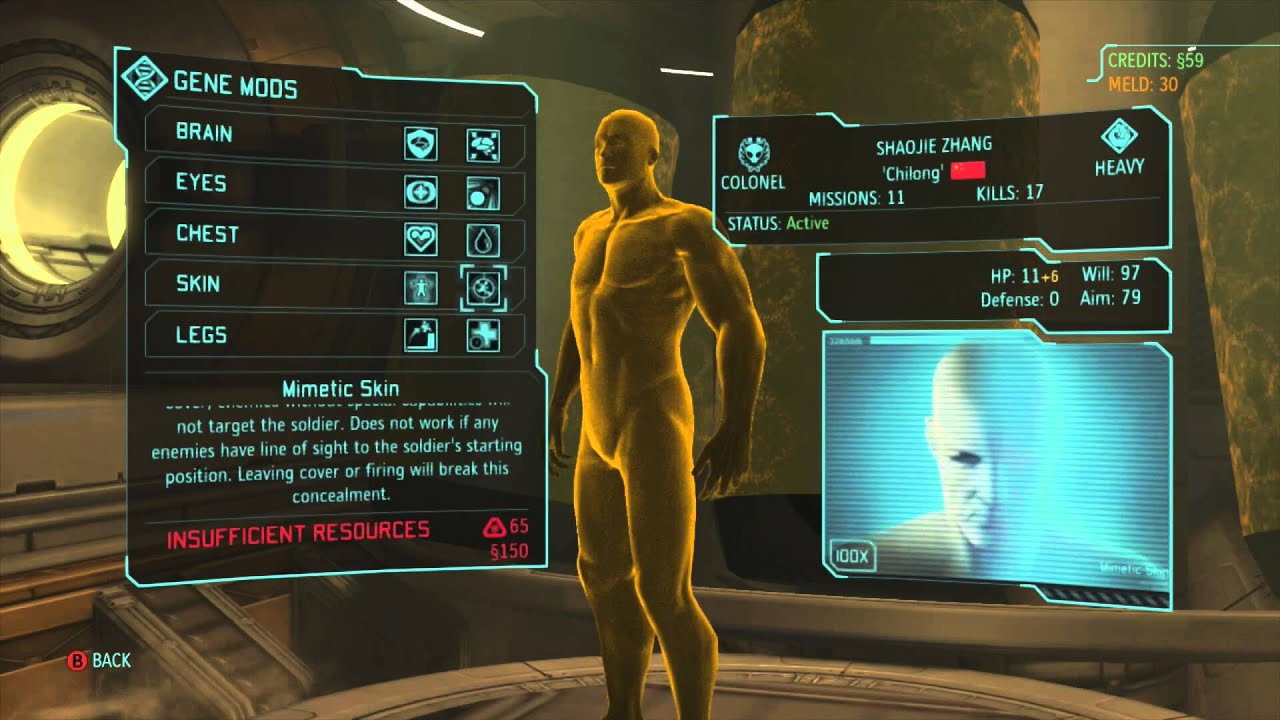 The above examples seem to imply a few important points regarding difficulty:

On the Effectiveness-Ludoaesthetics Spectrum (ELS), difficulty exists only at the lowest technical level. Each end of the ELS represents what each player wants at a certain point in the game with certain conditions. On this spectrum, games are designed with the player’s interactions, approaches and strategies in mind, each with its own degree of effectiveness and ludoaesthetics. These are not solely defined by mechanics or the player’s skill level, but rather the way in which they are experienced and perceived by the player.

Effectiveness refers to how well the player can progress and achieve their goals in a game using the set of tools they’re given and the strategies they’re allowed to formulate. How easy those tools are to use, and how good they are at helping the player progress towards the game’s intended goals, primarily constitute Effectiveness. Players who aim towards and stay on this end primarily look for the most effective ways to achieve the intended goals of the game (which of course include playing the game the easy way).

Ludoaesthetics refers to the perceivable aesthetic appeals of the aforementioned set of tools and strategies given to the players. Players who aim towards this end do not necessarily look for the most effective ways to achieve the intended goals. But rather they tend to look for the added intrinsic benefits derived from unconventional play. These benefits include:

The point of designing for ludoaesthetics is NOT to create increasingly harder challenges in order to accommodate the player’s increasing skills (though that is not to say such approach has no merits whatsoever). But rather, it is actually to encourage players to strive for aesthetics in their gameplay and to lean more towards the right side of the spectrum.

Here are a few suggestions on how to go about it.

Depth refers to the amount of space the player is allowed to make interesting choices using the set of tools they’re given by a game. For a more detailed explanation of what Depth is in comparison to Complexity, you can take a look at Extra Credits’ episode on Depth vs. Complexity. 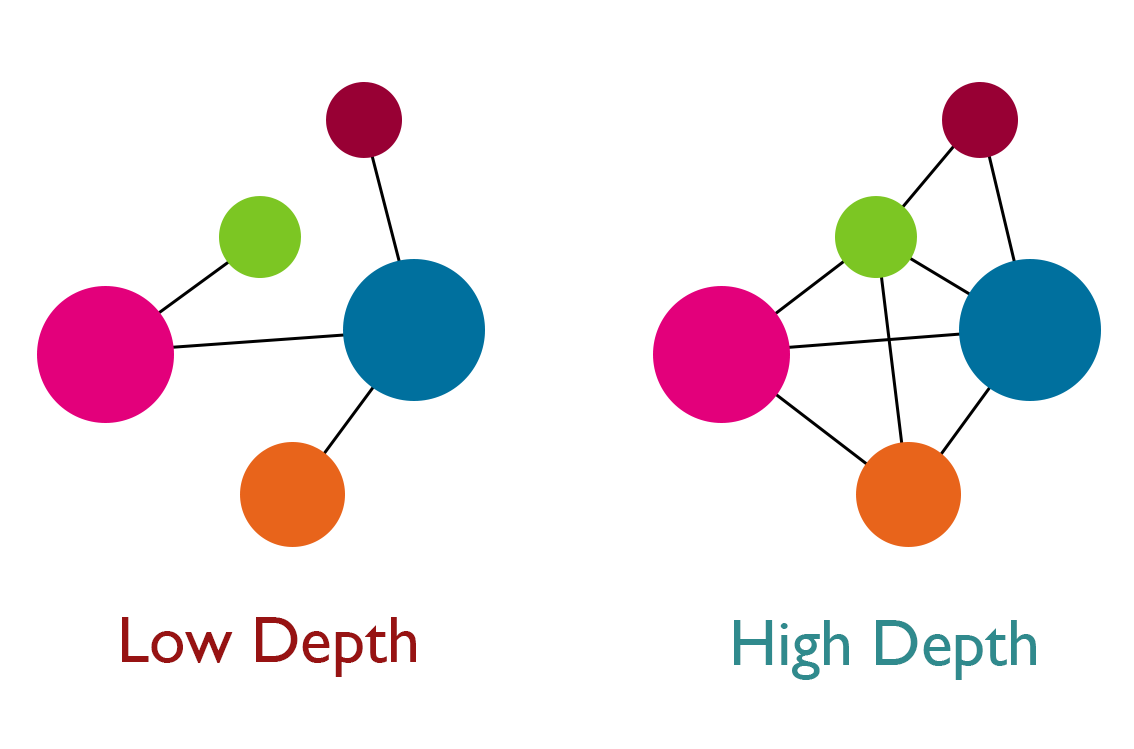 Essentially, Complexity is the amount of constituent elements that make up a game, and Depth is the degree of interactivity between those elements. The very nature of ludoaesthetics has to do with the deviation from the default, intended approach (a.k.a. Playing “by-the-book.”) Therefore, the more those elements “talk” to one another, the better chance it is for ludoaesthetics to emerge, because then the player will be able to find more different ways to control or manipulate each element.

Adding more depth is not only about simply adding more stuff in a game and making them as obscure as they possibly can be. It is also about leaving breadcrumbs to suggest that there is more than meets the eye, therefore encouraging players to explore further possibilities. What kind of depth to even add? And how does one go about communicating it?

Below is a conceptual representation of a set of challenges typically found in video games. 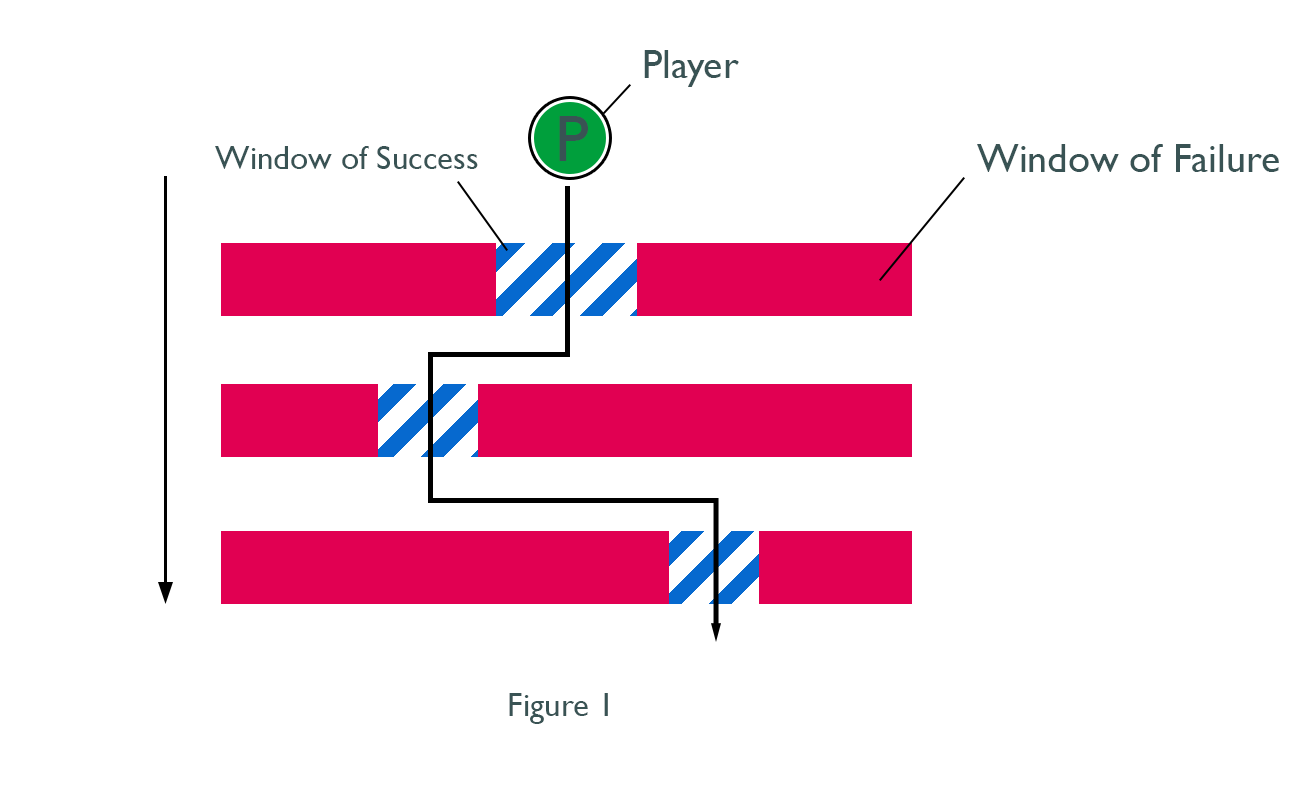 Each challenge is represented by a window of failure and a window of success. These windows can be spatial, temporal, symbolic, strategic, or a combination of all. They are the spaces in which the player enters by behaving in a certain expected way. Secondly, the black line represents the player’s interactive maneuvers: where to get across and which direction to turn to next, in order to overcome the set of challenges without stumbling into the windows of failure.

For example, say we have a situation in a 3D platformer game where the player is facing a pit, and across the pit leaning towards the right side there is a narrow platform. In such a scenario, we can assume that the window of failure includes any and all sets of behaviors that lead the player plummeting down the pit, and the window of success includes those that lead the player to landing on the platform across the pit safely.

Now consider the same representation of challenge above, but this time with  a slight deliberate arrangement. 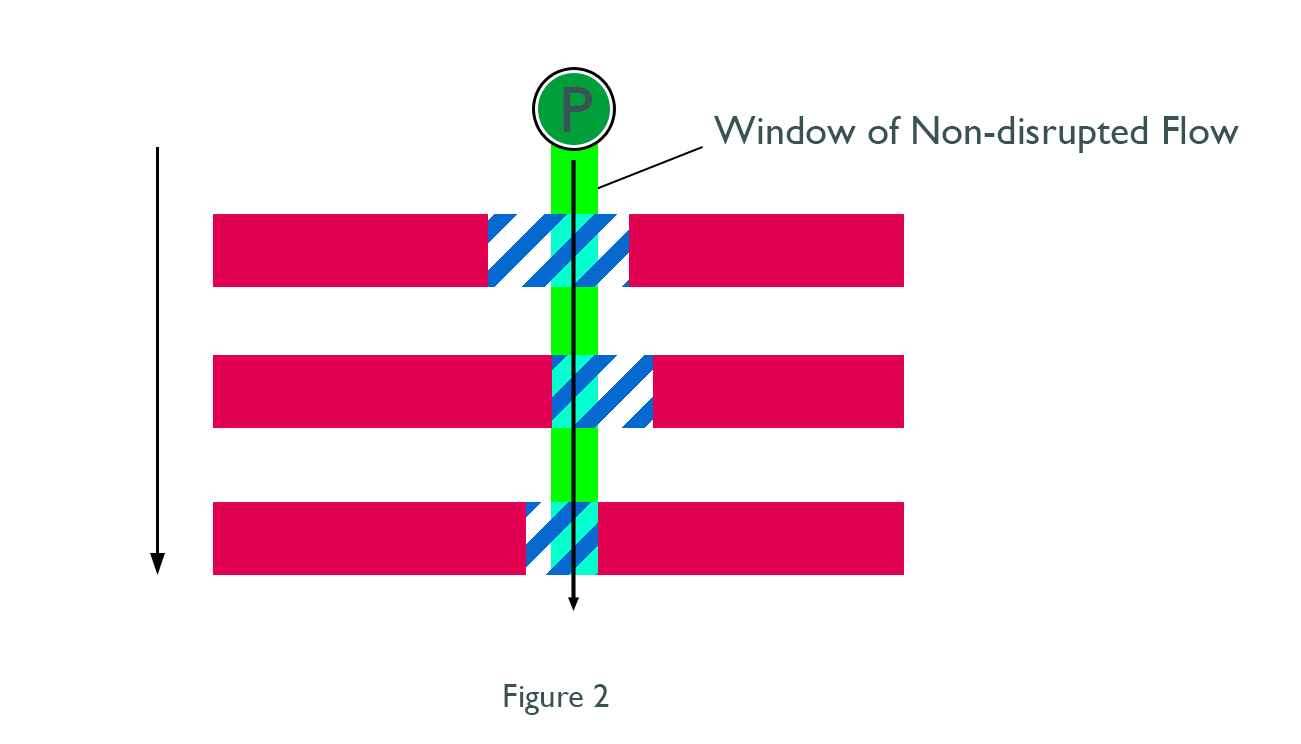 Of course, the downsides of it are aplenty: it can be extremely difficult to realize such a window exists in a real scenario. And in order to stay inside such a narrow window, the player has to be extremely precise and/or smart in their gameplay. You can think of this window of non-disrupted flow as an intended “weak point” of the challenge, where a single and concentrated attack will break the whole thing apart in one fell swoop. But the process of identifying such a weak point, and delivering the finishing blow with great accuracy may require a lot of trials and errors, and can be extremely tedious and/or difficult.

An Example from Master Spy

A common manifestation of ludoaesthetics comes in the form of speedrunning. Finishing with speed is, for the majority of games, not the primary intended goal. Games are rarely ever designed to be speedrun, and most players do not have to finish any games at high speed in order to not miss anything. So speedrunning has always been a sort of arbitrary self-imposed challenge by those who seek greater sense of enjoyment from their favorite games.

&a
Get daily news, dev blogs, and stories from Game Developer straight to your inbox
Subscribe