It's not quite the digital card battler that you'd expect. For Poker Quest, the makers of Clicker Heroes took inspiration from, well, poker to create the chance-based, card-driven combat at the core of its latest release.
John Harris
Contributor
October 04, 2021

A popular theme in RPGs is to take some various activity and map it onto the progress of an adventurer. This has been going on for a long time, and in a lot of different ways, but a particularly interesting new entrant into this field is the early access game Poker Quest.

Poker Quest takes inspiration from its namesake, and uses the mechanics of poker and its associated standard 52-card deck to power combat encounters that see players facing down fantasy monsters in card-driven, RPG battles. Depending on the luck of the draw, as well as on RPG elements like your equipment and the abilities of the monster, either side may make attacks throughout a battle. It works out very well in practice. Some monster cards are not revealed before their turn, and force the player to make a guess as to what attacks they’ll be facing, merging the randomness of a card-based game with the unpredictability of facing down a strange foe.

It's a neat take on a well-known, real-world system from the minds behind the Clicker Heroes franchise. Game Developer got in contact with Playsaurus, the makers of Poker Quest, who shared insight into its creation, and a look at the meaty spreadsheet that drove the more detailed, chance-based elements of its design.

Who are you, and what is Poker Quest?

I'm Thomas Wolfley. I usually go by my username online, Fragsworth. I am co-founder of Playsaurus, a game studio in Los Angeles. I've worked on a lot of different games, and Clicker Heroes is by far the most well-known. And I'm also the designer of Poker Quest.

Poker Quest is a fantasy game where you battle through a world full of monsters, using a standard deck of playing cards (like the "Queen of Spades") to empower your items in combat. Bigger and better hands can trigger stronger abilities on your items.

So, your previous games were the popular Clicker Heroes games. How did changing to something more challenge-based force you to adapt?

If we didn't actually have to make a transition, it probably would have been easier. Perhaps counter-intuitively, the part that we had to adapt to is the existing audience, we already have. We had to create a roguelike that is at least somewhat accessible to our Clicker Heroes audience. The challenge is in creating an experience that appeals to an extremely wide variety of players - both the typical hardcore roguelike players, but also the more casual players. I think we did a decent job of this by splitting the game into two optional modes - Upgrades and Classic.

Poker Quest has been called a deck-building RPG. The description is perhaps unusual; it’s not in the style of classic deck builders where text on the card determines what you can do each turn. Instead, you collect items that decide what you can do, and the cards you use are of the standard playing card variety. How did you come up with this idea?

So far, nobody who has played Poker Quest was disappointed that it's not really a deck-builder. It still mostly feels like one, even though it's not in any way. "Putting stuff into your items" was inspired by Dicey Dungeons. I was playing that game and thought to myself what an incredible world of mechanics you could create out of using cards instead of dice. Once I had that idea, and envisioned the possibilities, I had to make the game.

What do you think using playing cards lends to your game that using dice would not?

I can think of a few things off-hand: 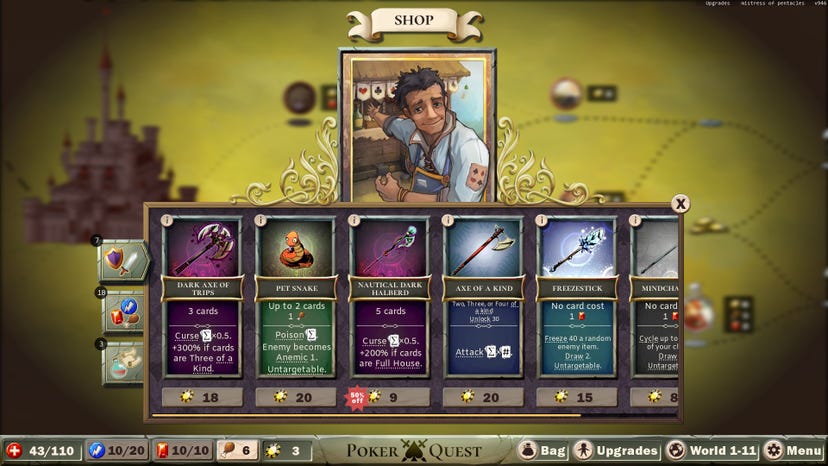 How do you balance a system like this? Do you play a lot of games, do you rely on playtesters, or is there any automation involved?

Balance took a lot of time, and was largely done by myself and Hotara (another Playsaurus employee). It started with all the balance work being theoretical, in spreadsheets, then once it was "good enough for us to play" it involved playing a lot. Once it was "good enough to release" it involved relying on player feedback. Now, I usually watch YouTube or Twitch streamers play, but Hotara still likes to play.

If you're into game balance, perhaps you'll be interested in seeing Poker Quest's spreadsheets, which are absolutely massive. They are public.

On the tab I linked (just above), you can see a giant list of all the possible types of hands, along with the probability you'll draw the hand given a certain number of cards. It's actually somewhat interesting if you browse through it. This was very useful to help us design the monsters (which are in another tab, as is everything else in the game, if you want to go down that rabbit hole).

At the start of a file, players are given the option to play Upgrades Mode or Classic Mode. Upgrades Mode lets players buy specific advantages, while Classic Mode removed that part of the game. How do you keep the game interesting for a while in Upgrades Mode while keeping it winnable in Classic?

We mostly just balance Classic Mode to be consistently challenging for the most experienced players, who have been playing for years now. In order to keep them pleased, their win rates shouldn't be too much higher than 50 percent. A side effect of this is that there is a tremendous learning curve to being able to win Classic Mode with any sort of consistency. The chasm between new players and experienced players is so wide now that Upgrades Mode will keep most people busy for quite some time, despite being a shortcut to a consistently winnable game.

Using playing cards gives players the possibility to notice which cards have appeared recently and make informed guesses about what cards will turn up later. It also helps to even out luck a bit; if a lot of Hearts have been drawn, it'll be a reshuffle before they can appear in the deck again. How much advantage (if any) does Poker Quest allow the player to take from this?

You can take advantage of knowing what's in your hand and the opponent's hand, but we tried to avoid using card counting as a major factor in the game for two reasons: 1) because it's a difficult and unintuitive skill to learn, and 2) it would be so powerful that the entire game would need to be balanced around the assumption that the player can do it. A game like Poker Quest could possibly be designed with card counting in mind, and might even be good, but we made an early decision against it and went forward from there. 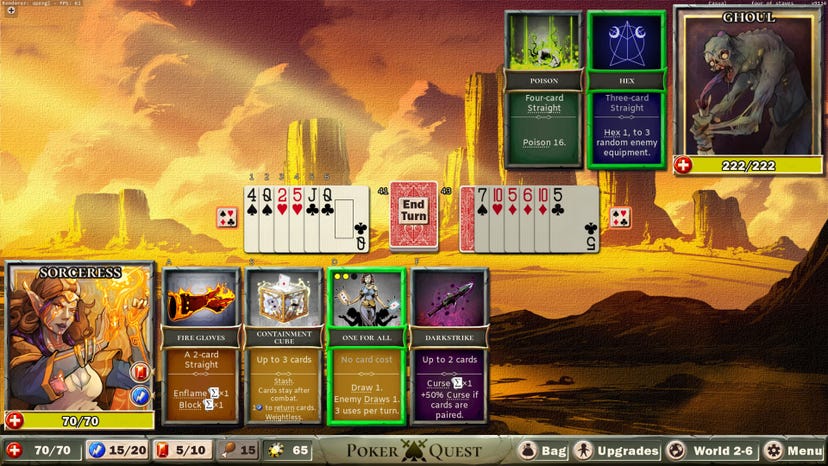 One thing I like about Poker Quest is how resources offer different kinds of advantages. Having a lot of jewels helps you in a different way than having a lot of energy. What roles do they play in the design?

More particularly, what was the impetus for adding food, and the possibility of being put into starvation (losing health and energy each turn)? Do you worry, given the generative nature of the game, about players not getting enough chances at food to survive even given perfect play?

Too many resources would be overwhelming and unnecessary, and too few could lead to things feeling simple and repetitive. I tried to strike some balance between the simple/complex: Complex enough that you never really run into the same exact situations in new runs, but simple enough to feel like you can quickly wrap your head around it.

The differences come from 1) how you obtain the resources, and 2) what you spend the resources on. We made sure both of those things are vastly different for each resource.

Food took a while for us to get right. Starvation usually doesn't kill anyone now, unless you're taking a big risk by not buying enough in the shop. The times I've seen it matter is when players greedily bought some amazing stuff, foregoing the food at the shop. And players usually don't mind if they starve to death, as long as they feel like it was mostly their own fault.

The description of Poker Quest calls it... a roguelike. What does the term roguelike mean to you? What do roguelike elements add to Poker Quest? Do you think they limit it at all?

I played Rogue when I was a kid, and just about every variant that was made in the '80s and '90s. So many different games are called roguelike now. Roguelike no longer means "a game like Rogue," but more "a game like roguelikes", and it's evolving to mean something less clear every day, with each new game. I don't think anyone can put a finger on a clean definition anymore. Most of it is fine, really, but I do kind of wish roguelike developers gave a little more appreciation for permanent death.

My favorite feature in roguelikes has been a sense of true permanent death. Most roguelikes today aren't very purist about it, but I took extreme care to keep it a core part of the game by insisting that "Classic" mode be a clear option right at the start.

True permanent death is important for players who get satisfaction out of progress that comes from within (by learning the game), rather than from grinding. We even avoided unlocking game-world mechanics, which I believe also subtly gets in the way of the feeling that learning is progress.