UNSIGHTED embraces the catharsis of Metroidvanias though player agency

"In UNSIGHTED, you have agency, you can make a difference, and if you make the right choices you can (with some effort) save everyone. Sometimes those choices are not clear from the start, but with experience, you can make better or more interesting choices the next time."
Joel Couture
Contributor
October 22, 2021

UNSIGHTED puts players in a world where a whole lot of people are running out of time, and it’s up to you to find these people and save them. Trouble is, there just isn’t enough time to save everyone. Not if you follow the most obvious path, at least. UNSIGHTED is a Metroidvania that asks you find its secrets and get creative with its weapons if you’re to have any hope of keeping everyone alive.

Studio Pixel Punk spoke with Game Developer about drawing inspiration from randomizer mods for Metroid, creating a game world where multiple routes are viable almost all the time, how they encourage and reward players for being creative with how they fight/explore.

Studio Pixel Punk: We wanted to design a game in which your actions as a player really mattered, in which you were always making meaningful choices and had to actually face the consequences of those actions. The way we decided to achieve this with UNSIGHTED was by wrapping most other mechanics in the game around the remaining time mechanic, and its other fundamental part, the Meteor Dust, which extends the time of one character. That way you are always choosing between exploring further to get more dust, or more powerful equipment, or just getting to a place, and always choosing between who you want to save, either because you like them or because they will be useful to you. And, of course, if it was too easy to save everyone and explore everything without thinking about it, then that choice wouldn't matter nearly as much as it wouldn't have the consequences we were looking for. 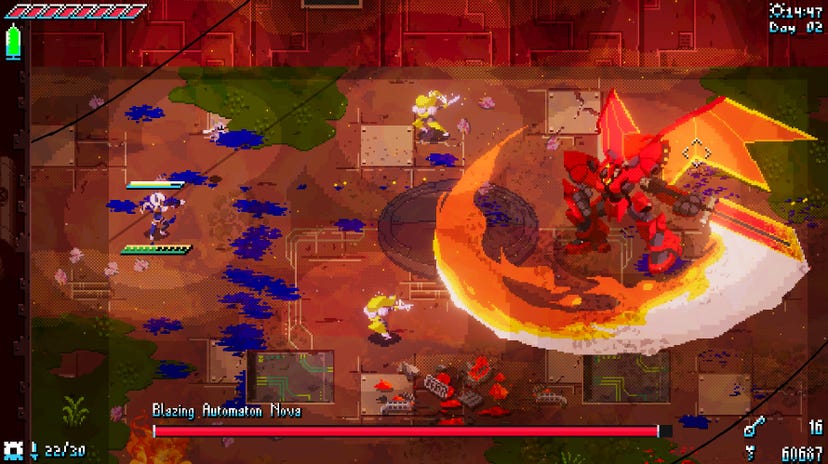 We tried to design the game in such a way that you are making those choices whether you're thinking rationally about them or not, because the repercussions of how you play are there. We, of course, realize this is a very stressful premise, and for those who don't want to handle this kind of stress there is Explorer Mode, in which you can tweak some of the game difficulty, including the time limit. We do recommend you try to play the game with the timer on if you can handle it, at least on a second playthrough.

Much of the exploration and finding shortcuts involved using weapons/tools in creative ways. What thoughts went into designing the weapons/tools and the paths they used?

One of the things we most love about games is when you can find creative ways to use the tools the game gives you. One of our inspirations for this aspect is the randomizer mods that exist for games in the Metroid and Zelda series. We like how you deviate from the original item progression and have to make do with weird combinations of tools.

So, we tried to recreate that feeling we had while playing those mods. Our game encourages you to try different items (and try different ways to find those items) by rewarding the player with the most precious resource in UNSIGHTED's world: time. If you have enough knowledge, there are huge parts of the game that can be either sped up or sometimes entirely skipped. If you're good enough and know enough, you get more time to save yourself and everyone.

So, we tried to design most of our obstacles in ways that can be traversed by more than one tool. We tried to design our tools in such a way that you can obtain the same tool, or a tool that does the same job, in multiple ways. One example we can give is the Spinner. It is useful for breaking stone blocks and riding rails, but you can break the blocks with the Grenade Launcher you can buy or craft, and you can skip some of the rails with the Hookshot which is obtainable later, but you can get to early if you know what you're doing. So, while there is a lot of redundancy there, all of UNSIGHTED's weapons and tools are designed that way to that end.

What challenges did you face in making multiple routes to various areas? In creating various paths players could take so they could reach places at different times based on the abilities they used?

With UNSIGHTED's world being so open and full of options, it's sometimes hard to keep the players who want a more linear and guided experience on the main path, so we had to use some clever design to hide or discourage the more advanced routes. The Dark Monsters are an example of that. If you know what you're doing you can absolutely kill them from the very first time you encounter one, and they are usually blocking meaningful shortcuts, but most players won't have either the knowledge or the confidence in their skill to beat them, so those paths are signaled for them as "not in the critical path". So, the more advanced routes always have some barrier of either execution or knowledge, and frequently both, on them. But we hope our more dedicated players can find them and burst Arcadia wide open!

Can you walk us through the creation of the various paths to one of the areas? how you built those multiple routes to get there, and how players could take advantage of them on new playthroughs or with creative tool use?

One effective example we can give you is the Garden Boss. When you are playing the game for the first time, you'll likely go through the Caves subarea first. That rewards you with the Shuriken item. That item is crucial in solving the puzzles to access the main Garden Boss; you have to light your shuriken on fire to light up torches on the way and burn vines blocking the path.

On a second playthrough, you might already be prepared for those fire-based puzzles and go to the Weapon Shop where there is a fire elemental sword. We designed those puzzles in such a way that having a fire elemental weapon trivializes them - you have the fire with you already, so you don't need to juggle your shuriken around torches and vines. This also makes the encounter with the boss easier, since there are fire puzzle elements to it as well. On top of that, to reward the really observant players, we put in a shortcut that is only accessible if you have a fire weapon (because there is no fire around it) that you can use to skip right through most of the Caves and Garden areas, straight into the boss room. And this is the first area after the tutorial.

Most of the areas and tools are designed in a similar way. There is always a basic route and multiple advanced routes that reward various levels of knowledge. 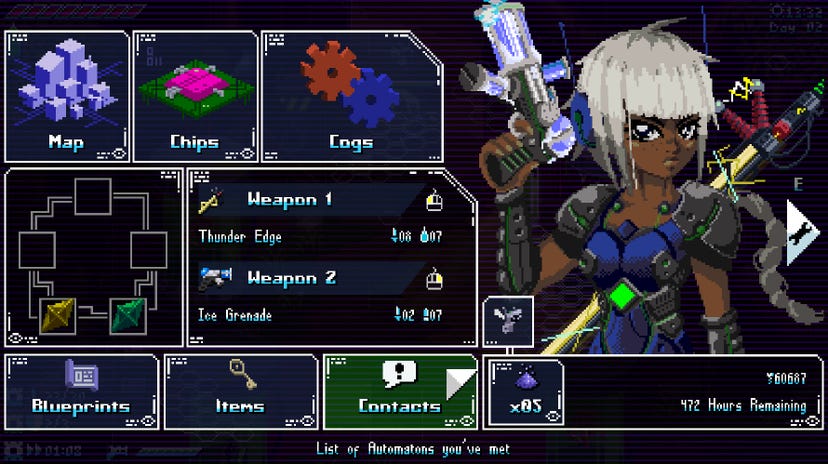 Weaponry offers many different options that let players customize how they use them. Why give each weapon many different styles? What ideas went into their designs to give weapons some flexibility in their use?

Much like we tried to give our players a lot of freedom in how they want to traverse the world, we tried to give that same freedom in the combat as well. So, we designed a good amount of weapons, each with elemental variations that add special effects to them. We made it so their effects can be further customized by three upgrade systems: blacksmithing, chips, and cogs, each with their own quirks for the player to find, experiment, and choose from. So, we designed the most varied effects we could think of with the resources we had in hopes that there is something for most people in the game, be it very risky and flashy, or more calm and calculated, and most of what's there in between.

Choice and creativity seem to be central themes of the game (and some examination on how you can't save everyone - at least not without a massive effort). What drew you to these themes? What do you want to make the player feel as they work through the world?

We like having choice. We like when games give us choices that have consequences to them. And we tried to tie that with what you mentioned about not being able to save everyone. We made it so that, in UNSIGHTED, you have agency, you can make a difference, and if you make the right choices you can (with some effort) save everyone. Sometimes those choices are not clear from the start, but with experience, you can make better or more interesting choices the next time.

That is what we hope is the main drive for people to replay our game - to make different choices every time. With those different choices, the game shifts and transforms into something new every time. In UNSIGHTED, at least, you can always try again and do better next time, and even better in the next next time. We hope that is an experience we can bring to our players - the catharsis of doing better.