7 roguelikes that every developer should study

Procedurally generated levels. Permadeath. Controller-smashing amounts of difficulty. Gamasutra asked several devs to single out some of the most instructive examples of the Roguelike genre.
Simon Carless
Blogger
June 12, 2017

“Roguelike” is a subgenre with easily definable traits. Procedurally generated levels. Permadeath. Combat that can be either hack-n-slash or turn-based. Difficulty that makes you want to smash your controller or keyboard in frustration.

Roguelikes have been a staple in the gaming world since the 1980s, and their core mechanics have influenced everything from the Diablo series to Spelunky.

With that in mind, we asked developers to name some of their favorite roguelikes - or games in other genres influenced by roguelike mechanics - and the lessons they can teach people today. And, many of these games are free and/or open source, which makes them easy to download, play, and study! 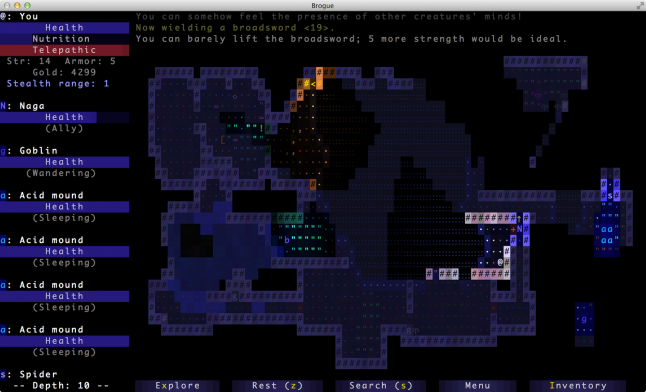 Brian Walker’s Brogue, which he began developing in 2009, was a popular pick amongst the developers we spoke to for this list. Many praised its interface, its variety, and its accessibility. Moon Hunters designer Tanya Short claims the UX was “made for maximum player pleasure and ease, and that's not something you can say about most roguelikes.” Cogmind creator Josh Ge says Brogue’s emphasis on terrain and environments creates a wider variety of challenges through interesting situations. But Subset Games’ Justin Ma believes it’s the game’s ASCII visuals that deserve the most attention.

“I'm very accustomed to how your brain's eye adapts to simplistic or ASCII visuals for games once you become proficient with them (being able to understand a complicated dwarf fortress scene rather than seeing a mess of letters, for example),” Ma says, “but I was still shocked at how much the various color mechanics used by Brogue improved the experience for me. Once you adjust to the visual language, things like clear lines of sight, rippling water, or fires spreading look gorgeous.”

Takeaway: Even minimalist tweaks to your game’s visual “language” can make a big difference in how the game feels.

Moria -- Building a world one kill at a time 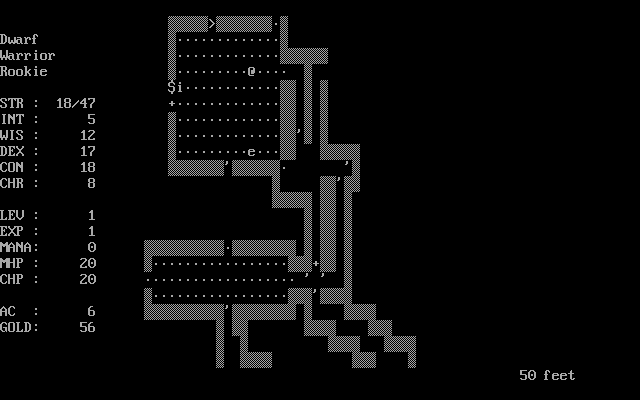 Moria was first coded in VMS Pascal in 1983, and is now available to play on a profusion of platforms.

A roguelike based on J.R.R. Tolkien’s The Lord of the Rings, Moria is notable for a mechanic called “monster memory.” As you battle enemies, the game records information about them. It would track how many times a monster was killed, what type of attack it has, and what levels it could normally be found on.

If the player is killed, that information carries over into a new game via a save file. “Moria's monster memory was really unique, and brought out that roguelike tradition of subsequent plays making the world more rich,” says Dwarf Fortress co-creator Tarn Adams.

The concept of transferring permanent information between saves would go on to influence other roguelikes, like Cellar Door Games’ 2013 platformer Rogue Legacy, adding a little persistence to a genre built on impermanence.

Takeaway: Adding a little permanence to a procedurally generated world can enhance it. 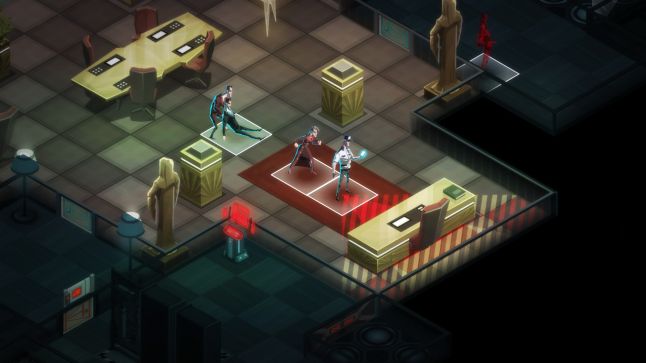 Hack-n-slash combat and randomness through procedural generation are both hallmarks of the Roguelike genre. Stealth games, on the other hand, generally rely on predictability and avoidance. Players are supposed to be patient, study enemy patterns, and avoid combat.

So, you would think the two genres would mix like oil and water. But, Short thinks Klei’s 2015 release Invisible Inc. is a great example of how the two can work well together. “I used to think that stealth gameplay couldn't really be procedurally generated in a satisfying way, due to the importance of pacing and "outsmarting" enemies, but Klei proved me completely wrong,” she says.

“Invisible Inc. is a beautiful example of how its algorithm takes apart the optimal player experience and figures out which pieces can be modular,” she adds. “In this particular case, stealth is broken down into various obstacles to overcome, and the game loop adds pressure between maps, along with new tools that expand your repertoire. In some ways, it is a very classical roguelike, and in other ways a visionary masterpiece that might shine the way for future procedural content that seems like it ‘just can't be done.’”

Takeaway: If that crazy game idea you have seems like it “just can’t be done,” it probably can be done.

Caves of Qud -- A masterclass in world-building 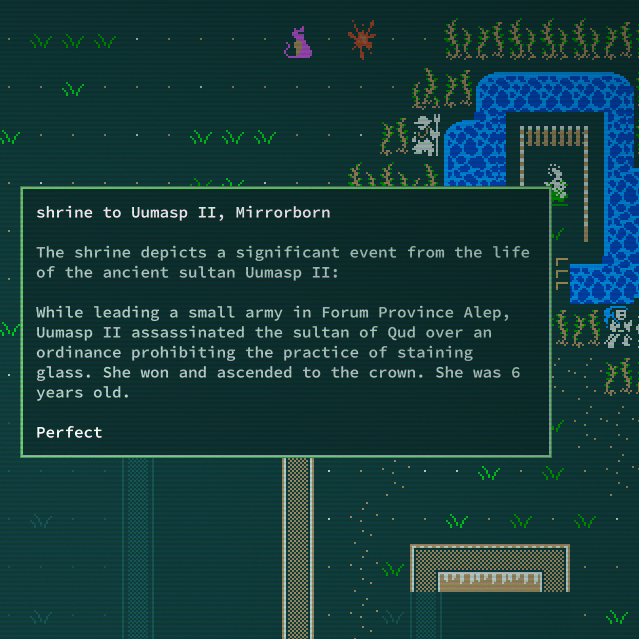 Currently in Early Access on Steam, Caves of Qud is a game that layers heaping doses of lore and player choice on top of traditional roguelike mechanics. Is a wall blocking your way? Dig through it. Want to form an alliance with crab people? Go for it! Want to unravel a story about a sentient cave bear and his technologically-savvy followers? Knock yourself out.

The world-building in Caves of Qud is extensive and uses an Entity Component System to enable a wide range of mechanical possibilities. And mechanics, Ge says, are one of the main focuses of the genre. Caves of Qud is, as Adams calls it, “a clinic on adherence to a setting.”

“Everything about the game works together to support a post-apocalyptic world of ruins, mutants and sapient plants, with cultural and historical information deeper than the standard for that sort of setting,” he says.

Takeaway: Lore and graphics are not the only building blocks of world building. Mechanics play a role too. 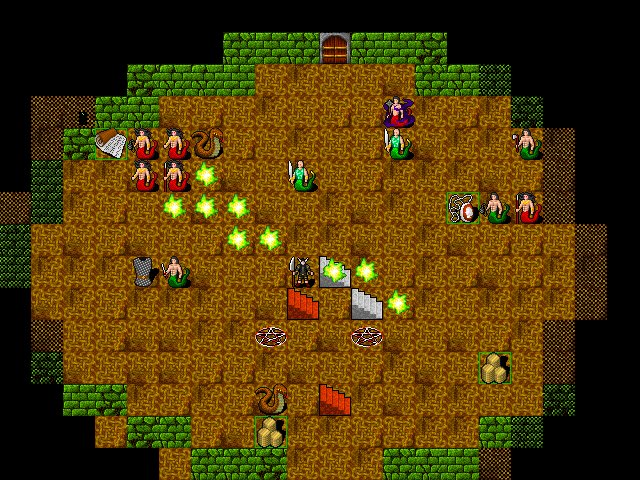 Ultima Ratio Regem creator Mark Johnson thinks Dungeon Crawl Stone Soup’s sheer volume of content, and the way it’s produced, is worth studying. DCSS is an open source community developed spinoff of the 1997 roguelike Linley's Dungeon Crawl in which players navigate a massive and diverse community-created dungeon. The dungeon’s “vaults” are hand-made areas of carefully-crafted content integrated into the wider procedural aesthetic of the game.

“Many of these vaults are created by fans and players, not the game's core developers, allowing players to practice their game development and see their creations eventually implemented in the final product,” Johnson says. “It also ensures a tremendous variety to the game, with even the most experienced players regularly discovering new content, new challenges with what are ordinarily procedurally-placed elements, and new ways for that hand-made content to intersect with the wider unpredictable dungeon levels.”

Takeaway: Incorporating your community into the game’s development can add an extra layer of replayability unmatched by procedural generation alone. 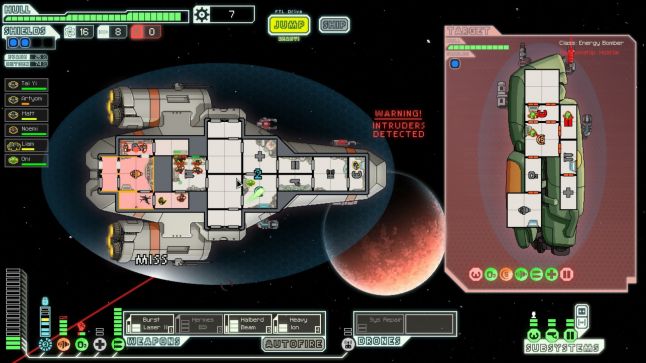 Johnson believes Subset Games’ FTL: Faster Than Light is an interesting game to study because of how it portrays player agency -- or at least the illusion of it. “Whereas in ‘classic’ roguelikes players tend to enter most battles at full strength -- seeing more clearly that any loss is likely their own error -- in many modern roguelikes like FTL, the player's health bleeds out slowly and gradually. Poor strategic choices become hidden behind what appears to be the immediate impact of a single ‘unlucky’ missile,” he explains.

“FTL shows implicitly the importance of how roguelikes portray the relationship between luck and skill so integral to the genre,” he adds, “and how players can potentially respond to a game where the luck seems not to only generate variety of gameplay, but to directly influence their chances of victory.”

Takeaway: Luck and skill is a delicate balancing act. Get it wrong, and it can leave your game feeling too unfair or too easy. 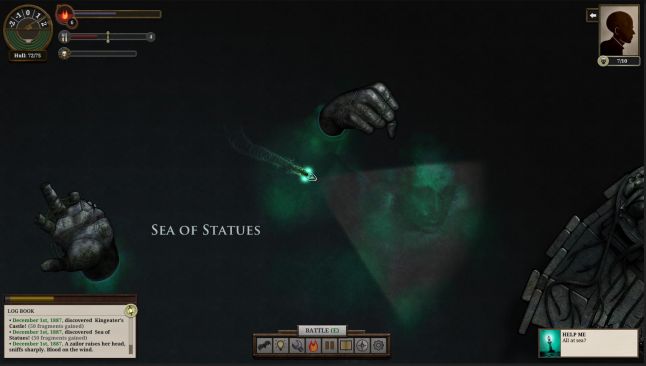 Sunless Sea is a good example of taking the trappings of one established gameplay genre and wrapping them with roguelike elements to create something new, says Richard Rouse III, director/designer/writer on The Church in the Darkness. In Sunless Sea, Failbetter Games takes the rich world it created in its browser-based choose-your-own-adventure game Fallen London and adds roguelike mechanics like procedural generation and permadeath.

“From a design standpoint, it felt like there was a lot of thought put into how to merge these two genres of games,” says Rouse. “The interactive fiction is made more accessible (shorter, more to the point) for roguelike fans, but so are the roguelike elements made sensible for people who like text-based adventure games (and there's a merciful mode for players who don't want to deal with the permadeath). Sunless Sea is a lesson in how to bring new life to two different genres of game, creating a very cohesive and balanced hybrid in the process.”

Takeaway: Adding elements of other genres to your game can create something wonderfully new, but care must be taken when balancing those elements.