Many of us have fond memories of the arcade games of our youth. For a lot of us, dropping quarters into favorites like Pac-Man, Street Fighter, and Frogger was a formative experience, the basis for a life-long passion for video games.

The industry has grown leaps and bounds in the decades since arcade games dominated it, and those coin-op classics may seem quaint or simplistic in retrospect. But look past their age, and you’ll find games with tight controls, layered mechanics that are easy to grasp but difficult to master, inspired uses of music, and efficient storytelling.

There’s a lot that arcade games can teach developers today. With that in mind, we reached out to some industry luminaries and asked them to name some of their favorites that offer a masterclass in game design fundamentals.

1) Q*Bert: A study in simplicity

The 1982 arcade game published by Gottlieb, is a pop culture icon thanks to its memorable visuals, uncomplicated mechanics, and unintelligible profanity. It’s played on a single game board consisting of 28 cubes shaped into a pyramid. Using a single, four-way joystick, you start at the top and work to change the color of each cube by hopping between them. A handful of enemies are introduced gradually into the game to impede your progress. Predicting the enemy’s movements, and making use of escape routes, is necessary to successfully change all of the cubes and progress to the next stage.

“It’s beautiful in its simplicity and how its difficulty ramps with that ruleset,” said Chris Johnston, senior producer at Adult Swim Games. “And, of course, it perfectly imitates player frustration in death with Q*Bert's trademark ‘@!#[email protected]!’”

Takeaway: One simple concept, polished to perfection, can provide a fun and addictive experience.

Richard Rouse, creator of the upcoming adventure game The Church in the Darkness, says everyone can learn something from Centipede and its interconnected “gameplay ecology.”

“This interplay of enemy types with the environment is perfectly balanced, with each element enhancing and changing how the other elements behave,” Rouse said, ”and once the player understands these interactions they can become a much better player."

Takeaway: Centipede uses the synergy between its enemies and environment to add depth and strategy to its lightning-quick gameplay. 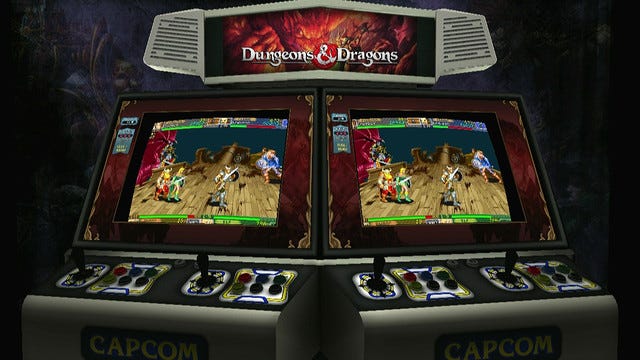 Capcom’s 1993 side-scroller is a great early example of branching narrative, according to Mike Lee, design director on Smash+Grab at United Front Games. Based on the Dungeons & Dragons tabletop role-playing games and set in the Mystara campaign setting, it featured four common fantasy class archetypes (cleric, fighter, dwarf, and elf) fighting against iconic D&D monsters. Some of the game’s bosses included a regenerating troll, a beholder, an archlich and, of course, a dragon. Over the course of Tower of Doom’s story, the players made choices on how they wanted to progress. They could choose between Door A or Door B, for example, or they could choose to take a shortcut through the woods rather than following the path.

“Each choice has different story aspects and experiences that make you want to explore the whole storyline, which require you to play the game more than once,” Lee said.

Takeaway: A branching narrative is a good way to give players agency and increase replay value.

Contra, the 1987 run-and-gun action game from Konami, is a prime example of how power-ups can be used to fundamentally change how a player moves and attacks.

The player begins the game with a rifle and unlimited ammunition. There are four other weapons in the game available as power-ups. There’s a machine gun, a laser gun, a fireball gun whose bullets form a corkscrew pattern, and a spread gun that sprays bullets in five directions. If the player sticks with the default rifle, however, they get two additional power-ups: a rapid fire upgrade and an invincibility barrier.

Although it can be tempting to pick up any of these power-ups when they appear, not every gun is ideal in every situation. “If you take the spread gun but need to focus fire on a single point, the game is much harder, as you need to be really good at dodging or evading while you fire at an end boss for what can feel like forever,” explains United Front Games’ Lee. “If you take the laser [which does narrow, single point damage] and the boss sends out large groups of low health enemies, you can quickly be overwhelmed.”

Takeaway: Contra’s power-ups are integral to its gameplay. They force players to strategize by choosing the right weapon for the right scenario. 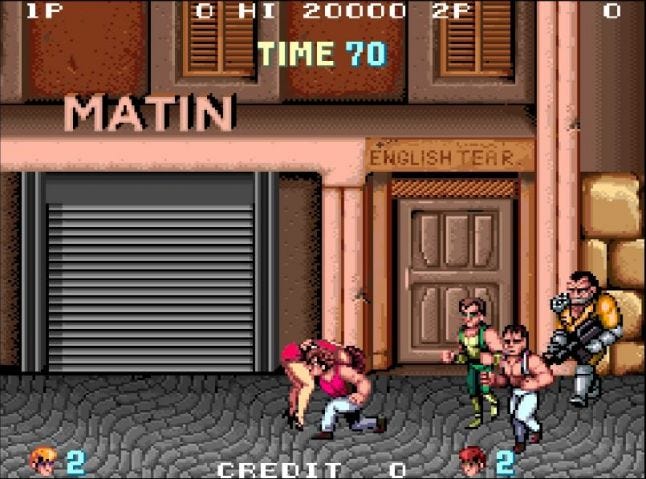 “Good storytelling is efficient storytelling,” said Supergiant Games’ Greg Kasavin, and the 1987 beat-’em-up Double Dragon is a masterclass in what he calls “narrative punctuality.”

In the game’s opening moments, members of the Black Warriors gang kidnap Marian, the love interest of martial artist Billy Lee. Seconds later, he and his twin brother, Jimmy, are punching and kicking their way through the gang’s turf to get her back. This brief sequence sets up the game’s entire story without uttering a single line of dialogue.

“Some classic arcade games established conflict, characters, and atmosphere in mere seconds, using no words,” Kasavin said. “While this may have been due to a combination of factors, including technical limitations and the format's requirement for quick play sessions, contemporary game developers still can go through the exercise of considering how to set up context for their games as quickly and richly as possible.”

Takeaway: When creating your game’s narrative, get to the point as quickly as possible.

Classic arcade games can create an almost trance-like experience for the player through both their gameplay and presentation, according to Supergiant Games’ Kasavin.

One example of this is Gyruss, a shoot-’em-up released by Konami in 1983. The player, represented by a starship, moves in a wide circle around the screen and fires at enemy ships. Enemies move in swirling patterns and can fire back at the player’s ship or destroy it by contacting it. Once all enemies are destroyed, the player moves on to the next level. The game’s scrolling starfield begins at the center of the screen and spreads outward, creating the illusion of flying through space.

Although Gyruss plays similarly to other arcade games like Galaga, Gyruss is notable for its use of music. It uses a fast-paced electronic version of Johann Sebastian Bach’s Toccata and Fugue in D minor that continuously plays in the background as you progress through each intergalactic level.

“While it's common for games to have music that changes from level to level, in Gyruss the music just plays on and on, and the stages transition seamlessly from one to the next,” said Kasavin. “Without the customary gaps, fade-outs, or pauses in the experience, the game's intensity ratchets up and the player becomes that much more focused. The game feels purer for it.”

Takeaway: Like a shark, Gyruss is always moving forward, using its constantly-playing music and constantly-moving background to create one seamless experience.

Like Gyruss, Sega’s 1985 rail shooter Space Harrier uses a quasi-3D background and constant movement to create a sense of flow. One of the earliest third-person shooters, it’s set in a surreal sci-fi/fantasy world filled with dragons, cyclopean mammoths, and flying robots. The protagonist flies around the screen and uses a laser cannon to blow up enemies and clear each stage.

“Stages transition seamlessly from one to the next, providing you with only brief moments to catch your breath. It feels like one continuous action-packed journey,” said Kasavin.

The original concept for Space Harrier, however, was very different from what eventually made its way to the arcades. It was supposed to feature a player-controlled fighter jet in a realistic military setting, but the idea was rejected due to hardware limitations. That’s when Sega developer Yu Suzuki stepped in to give the game its psychedelic sci-fi twist. It’s now considered to be one of Suzuki’s best works.

Takeaway: If an idea isn’t working, don’t be afraid to throw it out and try something utterly crazy.