Super Mario Maker was predictably enticing to the game development community. And since this site is developer-oriented, I thought I'd showcase some of my favorite Mario Maker levels created by devs.
Christian Nutt
Blogger
October 19, 2015

Super Mario Maker succeeded beyond my dreams -- creatively, that is. Since its introduction, a wide variety of creators have made some truly fantastic levels; people with no game design experience have, in fact, been making incredibly playable and enjoyable levels and posting them regularly.

Some of them are my very favorites. These are people whose names I don't even know, but whose contributions I follow eagerly. That's great, and it validates the very existence of Super Mario Maker, in the end.

Still, I've been following the work of professional game developers, too. Super Mario Maker was predictably enticing to the game development community. And since this site is developer-oriented, I thought I'd showcase some of my favorite Mario Maker levels created by working, professional developers -- because they are great levels, and because each illustrates the creative possibilities of the toolset and the skills and strengths of the developers in question. 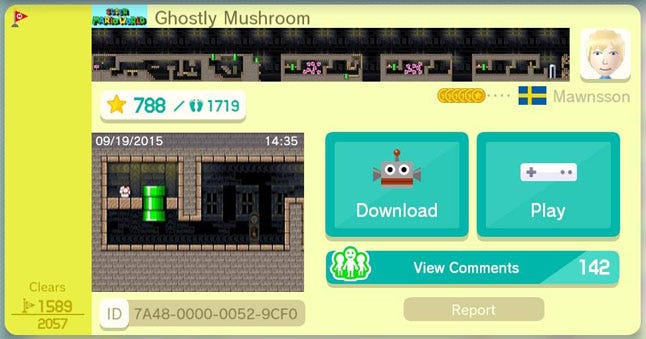 Ghost Houses were introduced in Super Mario World, and of all the Mario level types, they're generally the trickiest -- making your way usually hinges on figuring out a gimmick. Their 1990 introduction cemented the concept of the "puzzle platformer" into the game design lexicon.

A lot of people have been attempting to make Super Mario World-style Ghost Houses in Super Mario Maker, and they are, by and large, not very good. This one, however, is. Like many of the best levels in Mario Maker, it has its own aesthetic -- both of play, and of visual style -- that expresses something different than the original Mario game it draws inspiration from.

It's clever, puzzly, and polished -- and surprising. It has a sense of humor. And while you have to "get" it to get through the level, the player isn't badgered into finding a single, obtuse solution. 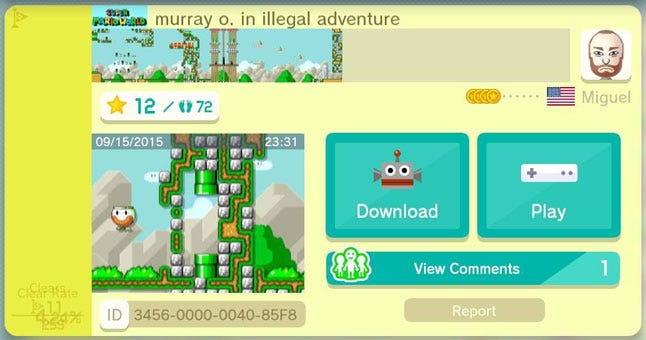 There's some irony in including one of Liz Ryerson's levels in this roundup because she just announced that she's leaving game development to concentrate on her music career.

But there's something about this level -- starting with the title, it's clear that you're getting Mario, but you're not getting Mario. The thing that stuck with me about the level -- and in fact, influenced my approach toward Mario Maker -- is the way that she defined her own completely new visual aesthetic for the level despite the fact that she's using the same tile set everybody else is. Seeing that was an a-ha moment for me.

In truth, the level is a little rough and a little tough, but it also very much has its own creative identity; that's a neat trick in a templated toolkit, and that's precisely why it's worth including here. 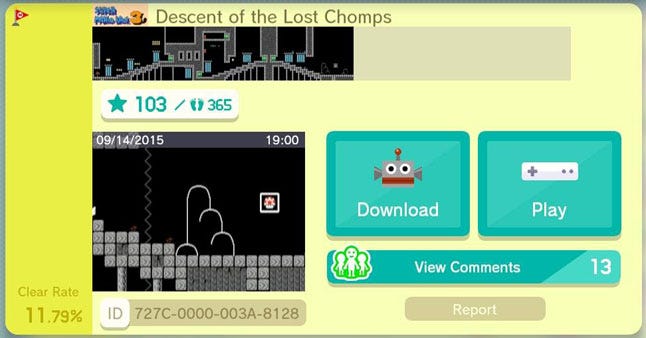 Descent of the Lost Chomps

Konjak is well-known for the IGF-nominated Noitu Love franchise of 2D action games, and 2D is where his creative heart lies; he even brilliantly reinterpreted the Zelda franchise in a tiny, free game. Given all this, I was expecting him to produce some great work in Mario Maker from before it even came out.

I was not disappointed.

My favorite of his levels is this challenging, tricksy level which features what I consider a boring enemy, the Chain Chomp, as the heart of a dynamic design. This is one of those levels where you're likely to die and retry -- but not in the way that phrase is usually used. If you die, you progress a bit further each time, and thus figure out just a little bit more about how to tackle the level. The design of the challenges is deliberate, and that's what makes this a compelling level.

You should also try Konjak's "Devourers of the Abyss" (F585-0000-003F-297E). It's short but also illustrates how Mario Maker allows you to use game objects that have been in the franchise since 1988 in new ways. 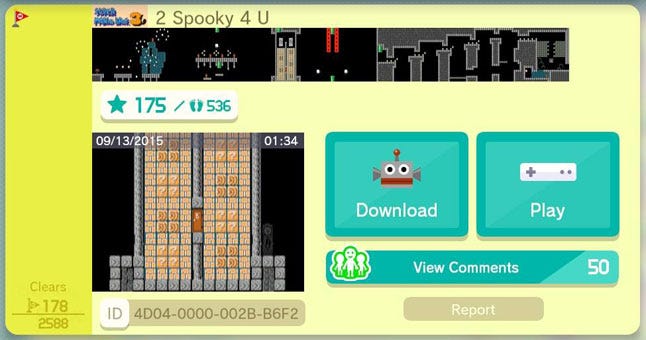 Of all Towerfall: Ascension developer Matt Thorson's many levels, this is my favorite: It's unique, crafted, and moody. Thorson had actually participated in the vibrant Mario ROM-hacking scene, and it shows in his designs: They're finely attuned to the possibilities of the Mario design toolset, but at the same time surprising. They're also very polished.

Like so many of the compelling Mario designs coming out of the game development community, this hews more toward the "puzzle platformer" side of things -- though that's not true of all of his levels. That said, you'd do well to also try "The Mystery of Spiny's Castle" (9439-0000-0013-78F3) if you want to see a very clever level that breaks away from the Mario norm. 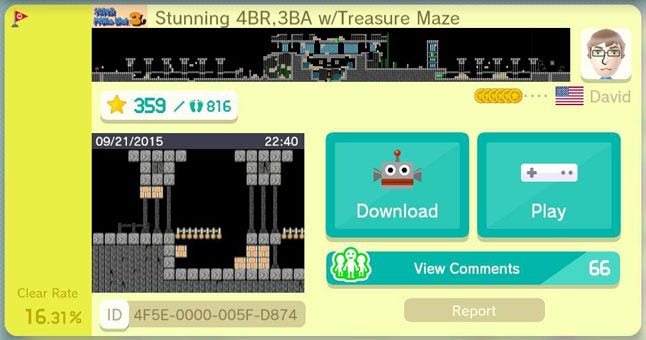 You'd expect the artist who worked on Braid to be familiar with the Mario oeuvre, and David Hellman's levels prove that he knows the franchise and how to subvert it. This map isn't one you'll likely clear on your first try -- it's the only Mario Maker level I've played where I died due to running out of time despite starting with 500 on the clock -- and it uses large expanses of space that somehow nonetheless become claustrophobic in the way you have to navigate them. It spins you around and points you in the wrong direction, or traps you -- and then you have to figure out how and where you should go and why. Possibly a meditation on searching for apartments in the San Francisco Bay Area.

More conventional is "Trespass in the manner u please" (3DCA-0000-002B-53B6), which nonetheless offers the charming suggestion that Bowser and his son, Bowser Jr. hang out in the bowels of an airship together, waiting for Mario to arrive. 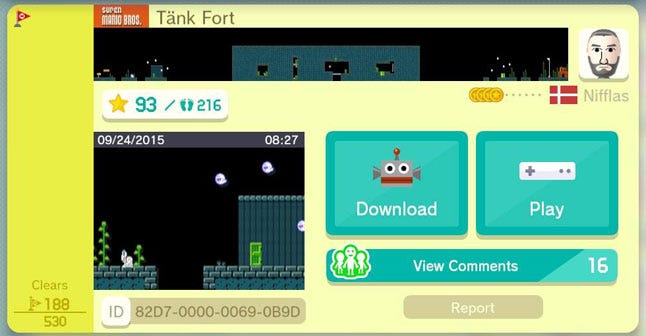 Nicklas "Nifflas" Nygren (the Knytt series) did something really great with Tänk Fort -- he almost morphed Mario into WarioWare, by offering a series of quick, discrete challenge rooms rather than one flowing level. It's inventive, and It shows the power of taking a basic design idea and then building it out.

"Tänk Fort" also illustrates another principle that so many of these levels embrace: Not outstaying your welcome. Mario Maker allows for large and complex levels; and while many of these choices certainly use a lot of the space Nintendo affords its designers, none of them squander it. This is a great example of "I'll show you something cool, and then let you get on with your life."

Nifflas' "Mirror World" (7DB6-0000-0062-685A) also does a great job of subverting the Mario Maker tools to do something they're not intended to do: flipping gravity. It's easy to see how he pulled off the trick, but the execution sells the idea. 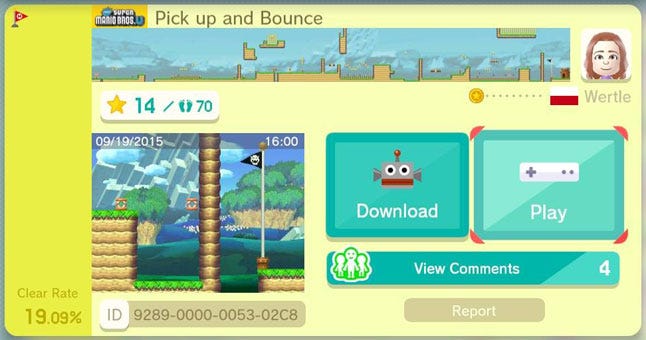 Pick Up and Bounce

This level, by former Insomniac dev and current indie Lisa Brown, seems almost designed to illustrate level design best practices: Introduce an idea, test the user on it, build on it and gradually make it more complex until the level ends right at the apex of complexity -- before the idea becomes boring. You could legitimately consider teaching this level in school, but that doesn't mean it's not fun. It is.

On the other hand, "Shell Key" (1770-0000-00A9-3DC9) is borderline frustrating -- but for that, in a way, it becomes more enticing, and it illustrates some good uses of Mario physics and level-building tools, too. [Ed. note: Since publication, it has come to light that this level was actually made by Andrew Gleeson on Brown's account.]

So what are the takeaways?

As I reviewed these levels while writing, I thought about what sets them apart from the majority of Mario Maker efforts:

Other good levels to try

Another "clever, doesn't overstay its welcome" kind of level, this one involving a nice pipe-based puzzle.

One of two included level that uses the original Super Mario Bros. skin; it's a nice, straightforward "run and jump" kind of level, like that game favored -- a surprisingly rare thing, given the Mario series.

This may well deserve to be in the "big list" up top, but there's an issue: It's not that much fun to play. That's not necessarily a failing, though. It's because Rogers is testing some of the boundaries of Mario design, here, and it's an awkward exploration.

A short, sweet Ghost House -- like I said before, not as simple a feat as it sounds.

The Spelunky developer devises a level as devious as you'd expect him to -- yet it's almost too evil. You can learn more about its creation in this Polygon video feature.

Plenty of Mario Maker levels offer nudge-wink references to old games from Nintendo and others, but this Pac-Man riff does the unusual: it manages to make a fun level out of that.

This level isn't much of a challenge, but boy, is it moody. It's just nice to inhabit this tiny alien world for a few moments.

Of course, these are far from the only developers making Mario Maker levels and there's a good chance I've left something great off of this list. I certainly know that the shorter list of the bottom could have kept going.

But it can be tough to find the good stuff in the game, which is part of why I've linked everyone's Twitter account. [Gamasutra/GDC overseer] Simon Carless has also been tracking developers' efforts in this public Google Doc, which you can add to. Please feel free to leave level IDs in the comments below, too -- yours' or others'.