Knights And Bikes has won the hearts and minds of the press and developers alike for its childlike aesthetic that has its own identity, while treading familiar ground of a retro-themed supernatural adventure.

At GDC this year, Foam Sword co-founder (and Little Big Planet veteran) Rex Crowle gave a great talk on how the game's visual identity was brought to life, and a few weeks ago on the GDC Twitch channel, he dropped by to discuss how that art, and the ideas behind it, influenced the gameplay of Knights and Bikes.

Knights And Bikes shot past its Kickstarter goals in part because, well, it looked so dang good. But Rex points out that for a while in the game's development, he and collaborator Moo Yu weren't really sure how it played. Crowle explained that before the sort of twin-stick brawler combat was implemented, the Foam Sword team tried out a turn-based combat system similar to Costume Quest, but the slow pace of battle didn't match the frenetic energy that was present in Knights And Bikes' art.

Eventually, after settling on the new core mechanics, Crowle and the Foam Sword team began looking to use that busy art style to inform the levels they were making. "It is incredibly tricky to know how to balance those visual cues, and hit that sweet spot where it guides you but without you really noticing that its helping you," said Crowle. 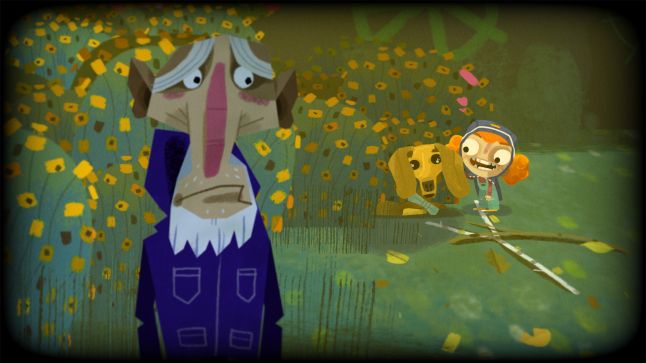 "...In Little Big Planet, you could just stick actual stickers on the environment." he said. "Sometimes we’d put big arrows in to help you. But it really takes you out of the fantasy just having an enormous arrow just pointing where to go, so then we replaced that with just certain shapes that maybe guide your eye in a certain way. One of my favorite things to do on [Knights And Bikes] is just put birds or animals that will run away. I think they’re always a good one because they move, so they catch your eye. They’re just something you want to interact with."

That solution fits the game's tone very well. Kids chase after birds and animals, making them an ideal marker to help players know they're going the right way. From there, Crowle said the next goal was to make sure individual levels had signposts that felt like they belonged. Frequently, he said he'd recall advice from a friend of his who worked on The Last of Us.

"[They were] talking once about how with all the staircases, you always felt like you were going the right way because of which side your weapon was on, and if you’re going the wrong way then the staircase is obscured by the weapon, and if it’s the right way then it isn’t. Obviously this isn’t like a first person game so you can’t use tricks quite like that but there’s definitely a lot of subtle signposting in Knights And Bikes."

Knights And Bikes has a particularly wonderful dialogue system where as characters talk, sound effects emit from their mouths which don't resemble actual human language. Whether it's plinking raindrops or rapid beats on a drum, text flows across the screen with a fidgety energy that matches the characters' personalities.

Crowle said that was a very deliberate decision, not just to juice the game's dialogue system, but to keep that kid-focused aspect consistent with the gameplay, level design, and the soundscape.

"It does create a nice sort of thing of feeling," he said. "Our two girls, they’ve got their own way of communicating. They often talk with these subtitles just popping up very quickly at the bottom of the screen and they’re quite in tune with each other. Whereas when they come and talk to an adult, suddenly it’s like the sound of pots and pans falling down the stairs. It’s a very alien tongue to them, really. The adults, they see the world completely different from them." 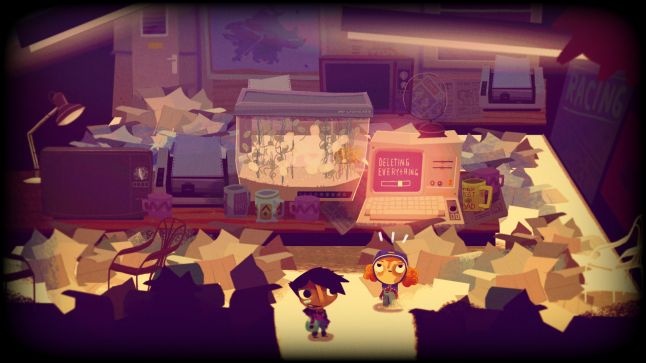 That kid-focused perspective inspired the broader levels as well. Crowle said that it informed a move from a game that was only 2D into being a 3D environment filled through 2D objects. "It suddenly became much more interesting, because as you moved through the world, things would be revealed, like either things being wiped off the screen or some lever that you didn’t know was there slowly appears as you move around."

From there, the game's two broad types of spaces are also informed by how a kid might be approaching them on this supernatural adventure. "In terms of level design...[the open world] part of the game is there to try and give the feeling that the kids are pushing outside of their sphere of comfort. They’re diving into the bushes and they can cycle wherever they want and there’s kind of a carefree-ness [about them]. But there’s also a slightly ominous sense as well, because they are going slightly into the unknown."

"But when they get to a level [like this] theme park out that's of season, then the game because more focused in on puzzles and combat and more little moments."

To think outside the box, don't even use the box

Implementing these creative solutions seems to be one of Crowle's points of pride with Knights And Bikes -- it's a rare opportunity to make a game with such a specific aesthetic focus. Crowle told us about one important tip for what he thought made the entire process possible -- his notebooks.

Crowle's notebooks aren't just filled with sketches for the game's art assets, they're the foundation of how the game's levels and interactions are manifest. Before he popped into Unity to bring the world of Knights And Bikes to life, he made sure to spend ample time in his notebook, because he believes without it, he wouldn't have come up with the solutions discussed in this article. "I try to map everything out in sketchbooks. I guess my process is really to get everything written down on paper so that you can really externalize it and sort of look at it and think about it."

To have a peek at Crowle's notebooks and learn more about the making of Knights And Bikes, be sure to watch the full chat with him below.