According to CD Projekt’s own data, 2019 was the second best year for sales of The Witcher 3, behind only its launch year in terms of unit sales. It, alongside its DLC and The Witcher spin-off games Gwent and Thronebreaker, was named as the one of the most important revenue-generators for CD Projekt’s 2019 as a whole.

The game has been a sales juggernaut in many of CD Projekt’s financial reports, and hasn’t dipped below 2.5 million sales per year since it launched back in 2015. The company shared a bit more data about those landmark sales in its year-end financial report for 2019, breaking down five years of sales data by platform and distribution method.

All the data is unfortunately presented only through charts, so any sales figures gleaned require a bit of estimation. Still, it looks like the game had its best year on PC in 2019 to date, and is continuing to see heavily digital sales, even before recent stay-at-home orders set in.

According to CD Projekt's chart, shared below, 53 percent of all The Witcher 3 sales in 2019, a good distance over that 2.5 million sold mark, were PC copies of the game. That’s very nearly more copies than CD Projekt sold across all platforms combined in 2018, and its single highest year for PC sales on record. 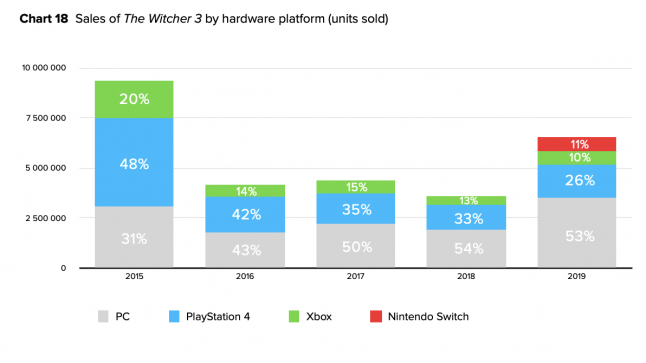 Across all platforms (PC, Xbox One, PlayStation 4, and, as of 2019, Nintendo Switch), 82 percent of all The Witcher 3 sales came through digital distribution with the remaining 18 percent were physical sales. While those figures have always skewed heavily digital (outside of the game’s launch year) 82 percent is the largest digital portion to date. 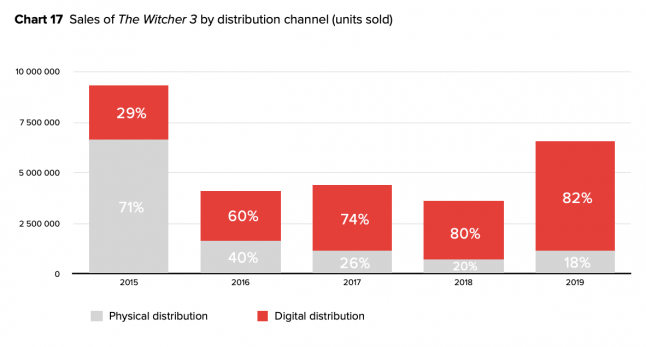 Digital, CD Projekt explains, tends to have a longer shelf life than physical releases, which helped those sales figures alongside players’ general shift toward digital purchases over the years.

While CD Projekt doesn’t offer up figures for earlier entries in The Witcher series, both The Witcher and sequel The Witcher 2: Assassins of Kings are mentioned to “continue to attract players and generate revenues" despite releasing in 2007 and 2011, respectively.