Ubisoft says that its games saw 100 million active unique players for the year, a record for overall player engagement.
Alissa McAloon
Editor-in-Chief
May 15, 2019

Ubisoft has officially closed out its 2018-19 fiscal year with €2.03 billion (~$2.27 billion) in net bookings, a 17.1 percent increase from last year’s numbers. The company dives into that figure in its latest earnings report, breaking down the performance of its new and back-catalog titles alike for the 12 month period ending March 31, 2019.

Without factoring mobile titles into the equation, Ubisoft says that its games saw 100 million active unique players for the year, a record for overall player engagement. Rainbow Six Siege alone now boasts a player base of over 45 million, a 40 percent increase year-over-year.

As always, Ubisoft’s back-catalog of titles gave a strong contribution to its net bookings. This year, back-catalog titles were responsible for 56.5 percent of the company’s overall net bookings, up from 47.6 percent last year.

Digital, meanwhile, made up 68.8 percent of overall net bookings with €1.4 billion (~$1.57 billion). Breaking that down further, Ubisoft saw €644 million (~$721.6 million) from just “player recurring investment,” or the sales of digital items, DLC, season passes, subscriptions, and advertising, up 39 percent from last year’s numbers. 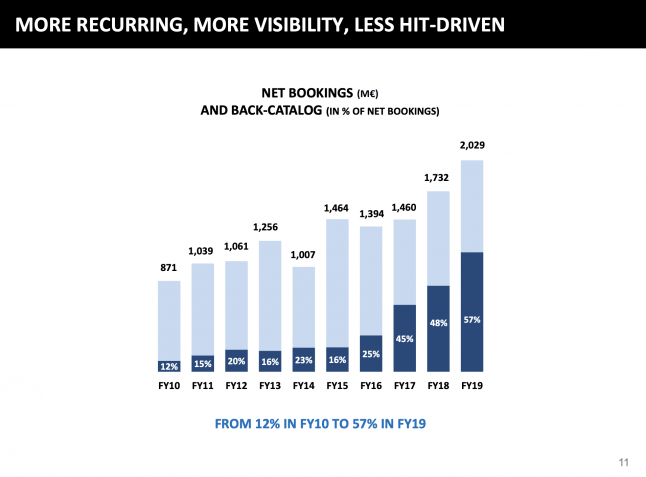 In a press release, Ubisoft CEO Yves Guillemot says that the company's “momentum continued to be buoyed by the quality of our games and live services, as well as our ability to reach a wide audience on more and more platforms and geographic regions.” This past year saw Ubisoft increase its PC net bookings by 78.7 percent and net bookings from Asia by 62.4 percent.

The close of the 2018-19 fiscal year also marks the end of the three-year plan Ubisoft outlined in 2016 to boost its sales and operating margin. In those past three years, Ubisoft says its increased its net bookings by 46 percent, non-IFRS operating income by 164 percent, and profitability by 10 points.