Tracing Sega's origins back to jukeboxes and Japanese 'gun corners'

"We decided to manufacture [light] guns & flippers ourselves in Japan, which led us to start developing our own arcade games," said former Sega exec Akira Nagai. "That was the official start of Sega."
Alex Wawro
Blogger
April 25, 2018

"We decided to manufacture [light] guns and [pinball] flippers ourselves in Japan, which led us to start developing our own arcade games. That was the official start of Sega."

- Former Sega exec Akira Nagai, from a 2001 interview published in Japanese and recently republished (in English) on Shmuplations.

Sega is making a show of celebrating its 16-bit roots this year with a Mega Drive Mini micro-console, but the venerable game company's history stretches back into the early days of Japanese arcades.

Devs curious to know just how far back it goes should check out Shmuplations' newly-translated interview with former Sega exec Akira Nagai, in which he speaks about the company's roots in the Japanese arm of a 1940s-era venture to import jukeboxes and other amusements for U.S. military bases.

While this history has been told before, this newly-translated interview (published in the 2001 Japanese book "Sega Arcade History") affords readers insight into Nagai's perspective on the company he served for many years.

For example, he talks a bit about why Sega started making its own arcade games (because the ones they imported broke down a lot) and how Sega's move in the '70s away from "gun corners" (areas with clusters of electro-mechanical light gun games) towards video games was a big boon for the company.

"The software development side of video games is very challenging, but as far as the manufacturing goes, they were far, far simpler. All you needed was the monitor and the pcb, and they didn’t require maintenance either. Electro-mechanicals, on the other hand, had many hand-made components, and their development took a lot of time. If one part went bad, the whole machine was inoperable until it could be repaired," Nagai said.

"With video games, the fact that the PCB could be re-written with new software was the overwhelmingly decisive factor in their dominance. That, plus the new movement/action that couldn’t be achieved on electro-mechanicals. For instance, the angles you could hit the ball at in Pong—to the people back then, that felt very revolutionary."

The rest of the newly-translated interview is well worth reading in full over on Shmuplations, as it touches on everything from Sega's early days competing with Taito ("Taito’s sales in those days were truly amazing—they were blowing away other Japanese companies, even Honda") to the company's efforts to "clean up" the image of arcades (see photo excerpt below) during the height of the '80s.

"One question that occurred to me during the cleanup campaign was 'Why do game centers only have one bathroom…?'" Nagai said. "So one of our first priorities when we opened new game centers was making sure there were bathrooms for both men and women." 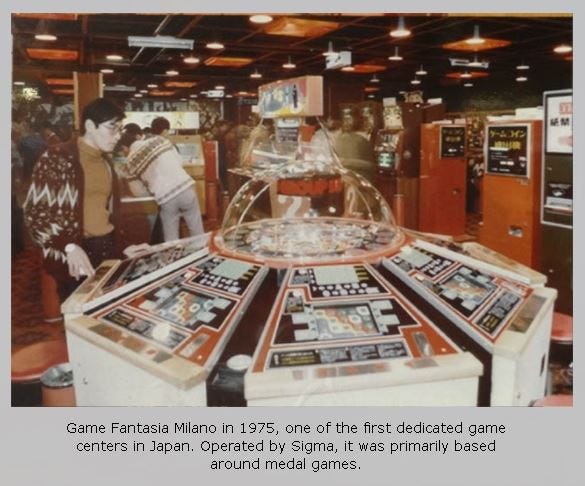