Stadia 'Founder's Edition' launches in November, base version in 2020

Google has finally offered more details on the Stadia game streaming service it announced earlier this year, shedding light on pricing details and the platform’s game offerings in a pre-E3 stream today.

Notably, Stadia isn't adopting the pay-for-access Netflix-of-games model. While Google does offer a Stadia Pro subscription for $9.99 a month, that fee isn’t a barrier to play games with the service.

Instead, Stadia users purchase games for full price on the cloud-based service, the same as they would for a console or any other platform.

That Pro membership does offer access to "regular content added to your library" (starting with only Destiny 2 and its expansions at launch), but players still have access to a free Base version that allows them to purchase and play games through Stadia (though at a max 1080p rather than Pro's 4K offering).

Thirty-one games have been announced for Stadia so far, including Wolfenstein: Youngblood, Borderlands 3, and freshly-announced titles like Baldur’s Gate 3 and Ghost Recon Breakpoint. Destiny 2 and all its expansions are also being offered for free to Stadia Pro subscribers as one of the services first free offerings, along with the ability to transfer a safe from another platform to the Stadia version of Destiny 2 instead. 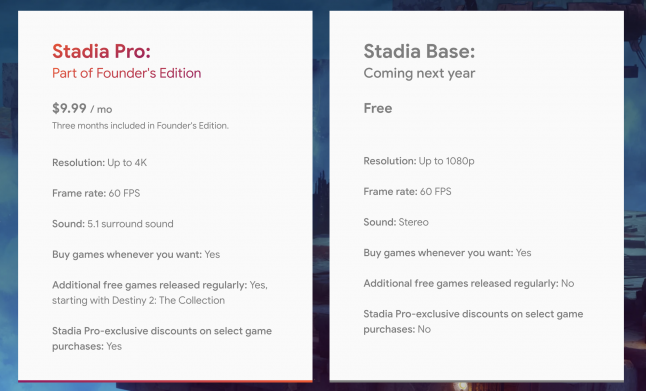 The selling point for Stadia has always been the ability to play games on nearly any device and, thanks to the platform’s datacenter-driven nature, with no downloads or updates required. Google offered more details on platform support during today’s stream, though not all platforms are supported from the get-go.

At its full launch next year, Stadia offers support for TV (via Chromecast), computers and tablets (via Chrome), and the Pixel 3 and Pixel 3a smartphones, though Google says Stadia will eventually come to more mobile devices down the line. 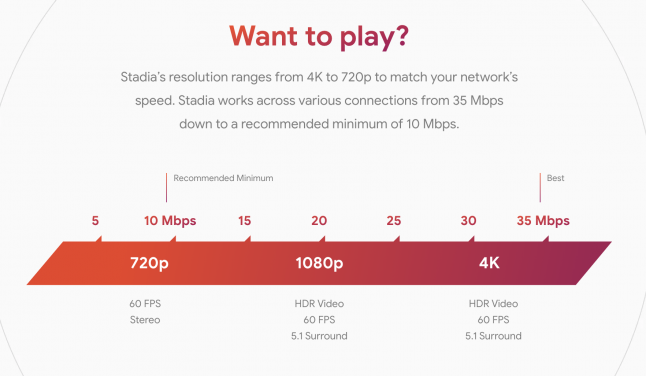 Stadia itself isn’t due to launch to the general public until a yet undisclosed point in 2020. However, it is selling a $130 Founder's Edition that, along with a Chromecast Ultra, Stadia controller, and a 3 month Pro membership, offers access to Stadia as early as this November. That November launch only includes support for the Stadia controller and TV-based play, though Support for other controllers and platforms like computers, tablets, and phones is set to arrive in 2020.