Quarterly revenue is down year-over-year for Nexon, a decline the company says was expected after exchange rate woes and an unpopular update cut revenue and engagement for Dungeon&Fighter in China.
Alissa McAloon
Editor-in-Chief
November 07, 2019

Quarterly revenue is down year-over-year for developer and publisher Nexon, a decline the company says was expected after exchange rate woes and an unpopular update cut revenue and engagement for Dungeon&Fighter in China.

In China, Nexon’s game Dungeon&Fighter released an update that wasn’t received well earlier this year, causing a significant drop in both engagement and revenue. The company expects it to take multiple quarters to fully recover from that poorly received update, but even then Dungeon&Fighter was weaker in Q3 than expected.

Despite that hiccup, Nexon cites its years of experience in managing live games and notes that it expects the 11-year-old franchise to bounce back and “grow to new heights in players, revenue, and, most of all, fun.”

That weaker quarter was offset somewhat by a strong period in Korea, where the company notes growth in Fifa Online 4 led to a year-over-year increase in PC online revenue, while mobile games like Fifa Online 4M and MapleStoryM helped increase mobile revenue. In Japan, North America, and Europe however, revenue decreased year-over-year as several games (including the semi-recently acquired Choices) started to decelerate. 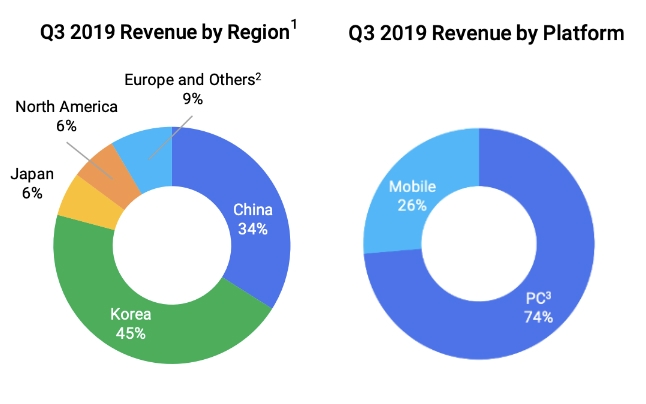 Operating income came in at 24,419 billion yen (~$223 million) for Q3, up 3 percent from last year and slightly beating Nexon’s expectations. The company notes that lower-than-planned costs and a sizable gain from its acquisition of Embark Studios are to thank, though a 2.2 billion yen (~$20.1 million) impairment loss offset gains.