Nintendo's new console is a handheld-hybrid called the Switch

After almost two years of radio silence, Nintendo has pulled back the curtain on its newest console, dubbed the Nintendo Switch
Chris Kerr
News Editor
October 20, 2016

After almost two years of radio silence, Nintendo has pulled back the curtain on its newest console, dubbed the Nintendo Switch, which is due March 2017.

In a preview trailer (shown above), the device was revealed to be a console-handheld hybrid packed with detachable 'Joy-Con' controllers, which clip onto either side of the Switch's high-def tablet-like screen so it can be used as a handheld.

The tablet portion of the console can also be slotted into the Nintendo Switch Dock and connected to a TV -- essentially turning the system into a dedicated home console.

Lifting the system from the dock will cause it to instantly transition into portable mode, allowing players to take their Switch on the go, or bring multiple units together for a face-to-face local multiplayer experience.

The Switch's Joy-Con gamepads are versatile beasts, and, as well as being clipped to either side of the device, can also be used individually or slipped onto a grip accessory to create a more traditional controller.

For those unsure about the Joy-Con option, a Nintendo Switch Pro Controller will also be made available -- although it's unclear whether these will need to be purchased separately.

"In addition to providing single and multiplayer thrills at home, the Nintendo Switch system also enables gamers to play the same title wherever, whenever and with whomever they choose," explained Nintendo.

"The mobility of a handheld is now added to the power of a home gaming system to enable unprecedented new video game play styles."

Key Switch details, such as specific tech specs, pricing details, and launch titles, are being kept under wraps for the time being. However, Nintendo has named a number of developers and tech partners (shown in the image below) who've confirmed they'll be supporting the device.

A new Nvidia blog post has also offered some small insight into what's powering Nintendo's latest creation, explaining the system is built around a custom, high-efficiency scalable Tegra processor, and a GPU based on the same architecture as GeForce gaming graphics cards.

"Gameplay is further enhanced by hardware-accelerated video playback and custom software for audio effects and rendering, [while we've] optimized the full suite of hardware and software for gaming and mobile use cases. This includes custom operating system integration with the GPU to increase both performance and efficiency."

The Switch will be launching in March 2017 alongside The Legend of Zelda: Breath of the Wild, which also got a new trailer today. 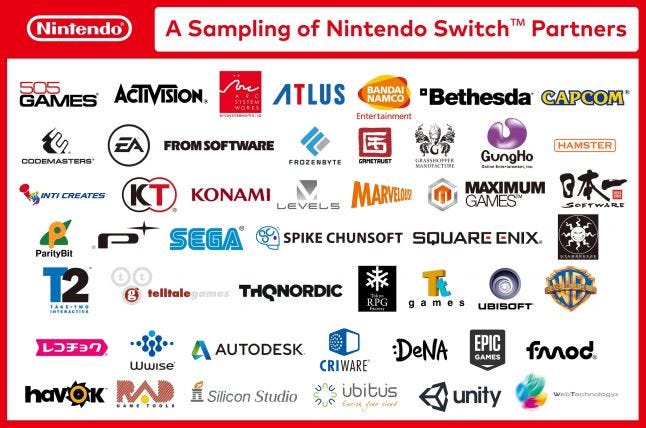