A recent study suggests that playing specific genres of games regularly may cause the players' brains -- specifically, the hippocampus -- to grow (3D Mario games) or shrink (Call of Duty).
Alex Wawro
Blogger
August 09, 2017

A recent study published in the peer-reviewed scientific journal Molecular Psychiatry suggests that playing specific genres of games regularly may cause the players' brains -- specifically, the hippocampus -- to grow or shrink.

The study involved a variety of tests on volunteers (mostly male, young, and right-handed) at the University of Montreal, all of whom were first put through a series of 3D maze tests to see if they were "spatial learners" who favor navigating spaces by learning landmarks of  "response learners" who tend to navigate spaces by memorizing patterns.

This matters to game devs because part of this study involved an interesting setup where two groups of self-described "non-video game players" were each given 90 hours of supervised in-lab training on either "action video games" (the list includes Battlefield and Call of Duty games) or "Mario video games" (3D Mario games like Super Mario 64) and then tested to see how the games had affected them.

By contrast, no statistically significant loss of grey matter was recorded in the Mario game group; the response learners saw an increase in the size of their right hippocampus, and the spatial learners' hippocampuses (hippocampi?) saw no significant change.

Asked why regularly playing action video games might lead to a decrease in grey matter, University of Montreal educator (and lead study author) Gregory West hypothesized to NPR that it might have something to do with those games' common use of in-game guidance systems.

"In the majority of action video games, there's an onscreen GPS overlaid on the screen," said West. "There's also wayfinding markers overlaid over the environment, and we know from past studies that when people are encouraged to navigate using these cues, really, they're not using their hippocampal memory system to navigate."

He went on to posit that instead these systems might encourage players to rely more on their caudate nucleus (in the brain's cerebrum), which he suggests is roughly analogous to "your brain's autopilot."

"It could be the case that these action video games are encouraging people to favor this reward system over their hippocampal memory system," West added. "And then it's become the use-it-or-lose-it type scenario."

There's a lot more data and some interesting MRI brain scans to be found in the full study. 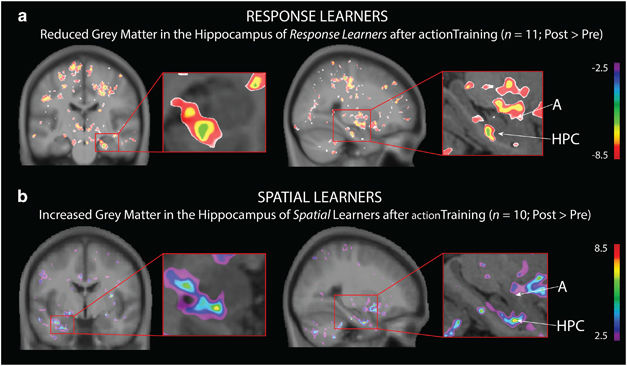