Electronic Arts says that the first quarter of its 2019-2020 fiscal year beat expectations, a feat COO and CFO Blake Jorgenson says was accomplished thanks to "broad strength across our core franchises."
Alissa McAloon
Editor-in-Chief
July 30, 2019

Electronic Arts says that the first quarter of its 2019-2020 fiscal year beat expectations, a feat COO and CFO Blake Jorgensen says was accomplished thanks to “broad strength across our core franchises.”

For the quarter ending June 30, EA reported $1.2 billion in net revenue, up from $1.1 billion at this point last year. Broken down into digital and physical goods, digital was responsible for the bulk of that net revenue for the quarter.

The slides from EA’s earnings presentation offer a little more flavor on the company’s quarterly performance, though those numbers are broken down into net bookings rather than net revenue. For reference, EA calculates that metric by adding total net revenue to the change in deferred net revenue for online-enabled games and mobile platform fees.

The two other sources listed, full game downloads and mobile, both saw year-over-year decreases, however. Full game downloads brought in $75 million in net bookings, down 22 percent, while mobile brought in $122 million, down 17 percent. For the 12 month period ending June 30, 2019, EA has recorded roughly $2.5 billion in net bookings from live services. The chart below breaks net bookings for previous quarters down by those same categories, as well as offering a look at net bookings for the trailing 12 months at the end of each year's first quarter. 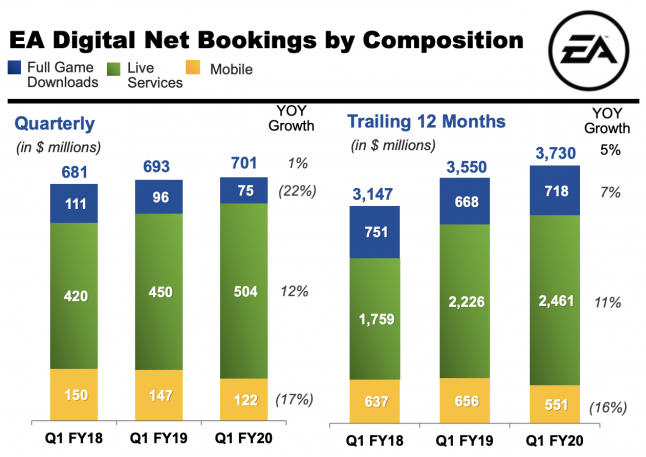