How To Get Started Playing Mystery Dungeon

The basics of how to enjoy playing a Mystery Dungeon game. From We Love Mystery Dungeon, for sale in a bundle up for a few more days at https://storybundle.com/games
John Harris
Contributor
May 10, 2021

This is Shiren, recognizable from his straw rain hat: 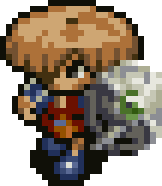 Not all the games star Shiren. Mystery Dungeon crosses over with several other game series, and when it does it stars a character from those. One is Torneko, aka Taloon, the merchant from Dragon Quest IV. Another is a Chocobo from the Final Fantasy series. But the best of these games, I think, are the ones that star Shiren, and if you learn one you've learned most of them, so let's stick with him.

Shiren is as silent a protagonist as they come. Speaking for him is his talking weasel friend Koppa, who doesn’t play a role in gameplay but shows up in towns and cutscenes:

Shiren is a Wanderer, which is a kind of adventurer who wanders the countryside, and is sort of like a ronin, but their specialty is exploring mystery dungeons, which seem to be a weird but natural feature of Shiren's world. 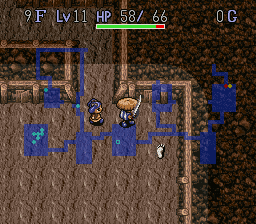 A mystery dungeon is a sequence of areas, called floors, even though they don’t always go vertically. Each floor’s layout is randomly generated, or sometimes chosen from a set of possibilities. Its contents, monsters, items, and traps, are also random. Note the map, in blue, overlaid on the screen! It might seem distracting at first, but you will come to rely on this display at least as much as the close-up view of the dungeon, although in later games you can disable it, or move it to a corner. 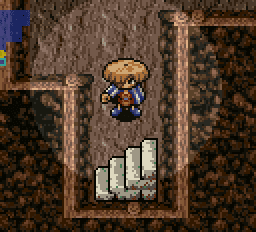 A trip through a mystery dungeon is usually one-way: you find the stairs (or sometimes, an exit path) to go to the next level, but you cannot go backward to previous floors. But advance enough levels forward and you clear the dungeon, which is a considerable video game accomplishment! 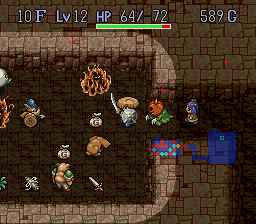 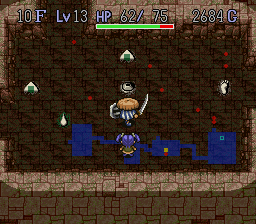 Another component is traps, which are scattered invisibly around most floors. If you step on a trap, you usually suffer a bad effect. You can check for traps on a space by swinging your weapon over it, but doing that everywhere is boring, and furthermore...

...if you do that, you’ll waste time. As you explore and fight, you are slowly getting hungrier, and you only have so much food. You can usually find more by exploring further into the dungeon, but if you waste too much time you could easily run out!

Back to those monsters. The creatures of the mystery dungeon are a tricky and capricious bunch. While some just beat on you, most of them have some troublesome special ability. These monsters can shoot arrows at you from a distance: 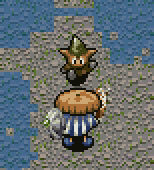 And these monsters can turn your items, permanently, into riceballs: 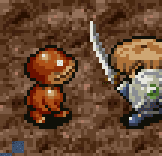 In nearly all other JRPGs, when a monster does something bad to you, it’s temporary. If it isn’t hit point damage, or a persistent state like poison, it clears up when the fight is over. That doesn’t always happen in a mystery dungeon. Some forms of harm, like Strength loss or item loss, do not just go away. And the range of things monsters can do to you is much greater than in other games. They can make you hungry, erode your equipment, drain your strength, or even rob you of maximum hit points or experience levels. And many other things too. 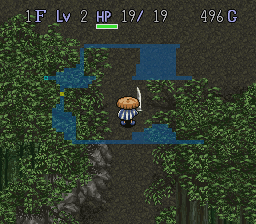 In some dungeons, even the items you find are unknown at the start, and their functions have to be deduced during the game! Mystery dungeons are treacherous places.

They have a reputation of being challenging, but that’s what makes them fun! Shiren is kind of a badass, you see. He roams around seeking out the hardest dungeons known and explores them for fun, hopefully to the end. Practice, and figure out good strategies, and with a bit of luck you can help him prevail. Mystery dungeon games are turn-based, so no reflexes are necessary, just patience, logic, and insight.

Even if you die though, it isn’t a judgment against you. It takes practice to become good at Mystery Dungeon games. Newbies always die a lot, but even experts sometimes just have bad luck. If you die, you lose all the stuff you were carrying, but that’s just the way of this world. You can usually find everything you need to complete a dungeon inside it anyway.

One way to think of it is, while Shiren’s level resets to 1 at the start of every dungeon, you as a player learn and get better as you play. And that's fun! Dying in a mystery dungeon can be a lot more fun than winning other games. If you can laugh at yourself, and at the sometimes ludicrous workings of fate, you'll enjoy playing Mystery Dungeon games.

But eventually, you can win. You can do it! Good luck, wanderer! We're cheering for you! 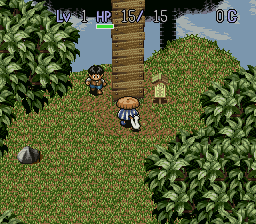 This is an excerpt from We Love Mystery Dungeon, a book by John Harris (that's me) available in the current gaming Storybundle. It contains a lot of information on the 29-game-strong Mystery Dungeon series, and lots of screenshots! I think you'll like it.