Sponsored: Find out why partnering up allows Midwinter Entertainment to capture a wider target audience and improve player experience, while staying laser-focused on finding the fun.
Alissa McAloon
Editor-in-Chief
July 14, 2021

Find out why partnering up allows Midwinter Entertainment to capture a wider target audience and improve player experience, while staying laser-focused on finding the fun.

Games without cross-play exclude a huge chunk of their target audience, which means lost marketing and sales potential for game studios relying on recuperating the massive expense of making them. Omitting cross-play negatively impacts gameplay, too.

The most obvious downside is gamers can’t play with friends on different platforms. But smaller, segmented pools of players also result in longer wait times and poorer matchmaking.

Added to that, niche game modes and features may not be sustainable to maintain without cross-play to aggregate player populations.

But for small studios, enabling cross-play is yet another problem that needs solving – and the last thing you need to be worrying about at launch, if the backend you've been using is not already cross-play compatible.

Launching with cross-play takes a huge amount of resource

“You should be launching on every platform that makes sense for your game,” says Chris Giroir, Senior Software Engineer at Improbable. “If your game plays well on a platform and it’s fun on a platform, there shouldn’t be a technical reason you don’t launch on that platform.”

Having spent eight and a half years at Blizzard Entertainment working on titles like Overwatch and World of Warcraft, it’s fair to say Chris knows a thing or two about game development. Now, he’s a lead in the Improbable online services department with the mission to empower smaller game studios to reach similar heights.

Chris knows all too well the challenges of launching on multiple platforms and stores: “They all come with their quirks. They all come with different certification requirements. They all come with a different set of rules that you have to accomplish in order to release on their platform.” He estimates you’d need two people working in-house full-time for three months for every new platform or store you want to launch on. “And that’s not something normally teams can pull out of a hat.” 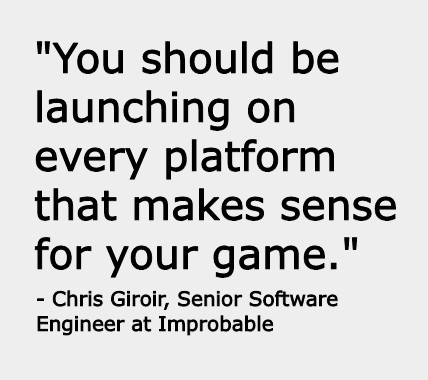 Midwinter Entertainment is partnering up to enable cross-play

Right now, Scavengers is in Early Access, available exclusively on PC. But very soon it’ll be publicly available on Playstation and Xbox with cross-play.

So, how is Midwinter Entertainment – a lean new studio founded by former Halo devs – enabling cross-play for their latest game? By drafting in Chris and the team, backend services like social, presence, chat, lobby, matchmaking, progression are all in hand. “They can focus on their game – focus on making it fun – and we can provide these multiplayer, multiplatform aspects,” says Chris.

The IMS-provided player identity service Scavengers uses is built on an industry-standard OAuth 2.0 server, which is the most used and validated authentication protocol available on the market today. This allows players to register with any account across any store, platform, or social account (including Steam, Google, EGS, PSN, Xbox and Twitch). And, if they’re playing on multiple platforms, they’ll be recognised as the same player.

Not only is this a core component for cross-platform social and real-money transactions. It also makes for quicker, more effective matchmaking because there’s now a single, far bigger pool of players (say goodbye to imbalanced matches or long queue times). However, the service can still accommodate the strict requirements imposed by Sony and Xbox, such as Playstation players having the option to play only with other Playstation players, or the need to display a platform-specific identity.

Because it’s based on open standards, integrating with it was easy for the Midwinter Entertainment devs. To make it happen, “login with the platform that you’re already using, send us some of the details, and we’ll tell you what user account you’re actually dealing with so you can have cross-progression, cross-play, and all of those things really, really easily,” explains Chris. Plus, its extensible system means they can add on additional third-party support when they need them. 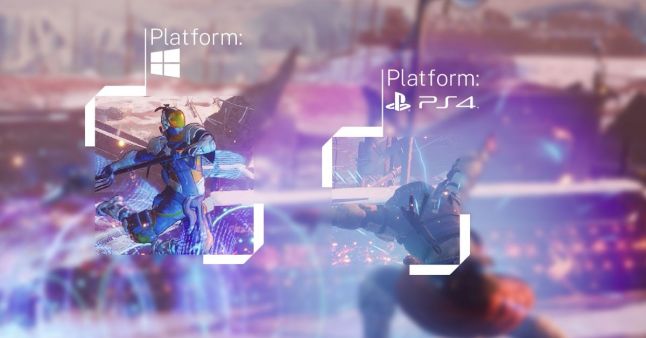 Cross-platform social means gamers can send invites to players across all platforms and stores. But since friends lists are platform-specific, extra work is needed. What that work looks like depends on the game: Scavengers is unique in that it requires the ability to create squads of three players; other games might need something else entirely.

For Scavengers, it was important to create a solution that was easy to integrate with – hence Chris and the IMS team creating a custom solution built off XMPP. “[I]t’s a protocol that’s – again – open, standard. You can find clients for it anywhere,” he explains. Existing Unreal Engine plugins also made integration straightforward for Midwinter Entertainment. On top of this, they added in all the custom features Scavengers needed, including integration with the progression and login systems. 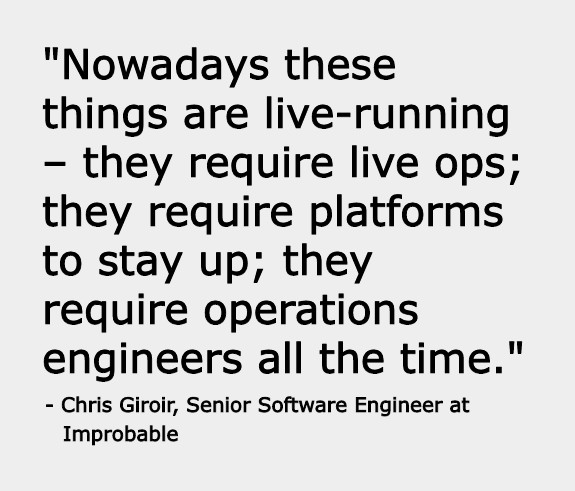 “One of the tricky aspects” of real-money transactions, explains Chris, “is the different platforms actually own a lot of the data… When you’re buying items in Scavengers, you’re giving your credit card information to Steam, or to Playstation, or to Xbox, right? We never touch it, which is a good thing. You want that data to be in the safe place and in the right place.” Of course, none of the individual stores handle transactions in the same way.

The solution to this is what we call a game data API: a backend service that underpins the entitlements service and progression system, handling things like players’ levels, what Explorers they own, and real-money transactions. Making these work cross-platform is far from straightforward, because all the platforms do things differently. But with IMS, explains Chris, “Midwinter doesn’t have to worry about those details… With the exception of needing to integrate with each store’s purchase experience, there is no client code needed to handle these different items. You just see what’s for sale, the user requests to buy something and we handle that all in the background on that platform.” Launching on a new platform simply involves adding it to the backend.

Focus on making the game fun, and we’ll focus on keeping it running

The biggest goal for the teams right now is certification on all the platforms – and Chris says they’re “very, very close.” What then? “After that comes [Midwinter Entertainment] improving their game,” says Chris. New game modes, maps – “all the fun stuff that comes with an ongoing live game.” As with any studio, being able to tweak parameters in response to player analytics is a top priority.

The days of a game going gold, being shipped and that’s the end of it are over. “Nowadays these things are live-running – they require live ops; they require platforms to stay up; they require operations engineers all the time,” explains Chris. “And a lot of these small studios, you don’t have the manpower to do that. And you shouldn’t, right? Focus on making the game fun, and we’ll focus on keeping it running.”

Online services from Improbable Multiplayer Services (IMS) are cross-play by default, so using them from the outset means your game will “work ‘magically’ with all the other platforms as soon as you turn those options on,” as Chris explains. Unlike other providers of similar services, though, IMS also offers solutions for enabling cross-play in live games – including recommending and migrating your game to cross-play-compatible services.

“Not only do we have the services that you can use,” says Chris. “But, on top of that, we have people in the company that are experts in this area and can do custom work for you.” It’s this combination that makes partnering with IMS to enable cross-play not only easier, but also quicker, cheaper, and less risky than attempting it in-house.