Hands-on: Full-room SteamVR highly-impressive, even as a prototype

Valve Software was on hand at Game Developers Conference 2015, doing behind-closed-door demos of full-room SteamVR, and even in prototype form, the company's offering is already impressive.
Kris Graft
Publisher
March 04, 2015

Valve Software was on hand at Game Developers Conference 2015, doing behind-closed-door demos of full-room SteamVR, and even in prototype form, the company's offering is already impressive.

Our demo involved a prototype SteamVR-powered HTC Vive headset (dev kits on the way this spring), wired to a computer and two prototype controllers that featured touchpads, buttons, motion sensors and haptic feedback. The setup was flanked by two boxes that shoot lasers throughout the room for motion tracking. Movement was all one-to-one with no latency issues.

One concern about full-room VR is running into walls in the real world. Valve countered this issue by having the system dictate a "safe area." If players move out of the safe area, a grid flashes up to remind you that you're about to run into your wall or coffee table.

There were several demos on hand, each giving a different VR experience, ranging from standing on the deck of a sunken ship as fish (and a huge whale) pass by, to an art program where you can draw, sculpt, and walk around your work.

One demo was Job Simulator 2050 from Owlchemy Labs. I found myself standing in a virtual kitchen with a slightly masochistic robot (I'd throw a rolling pin at him, he'd ask for more), combining ingredients in a pot on a stove, grabbing food from a virtual refrigerator, and serving up a plate. It all felt natural and intuitive (and fun and ridiculous). 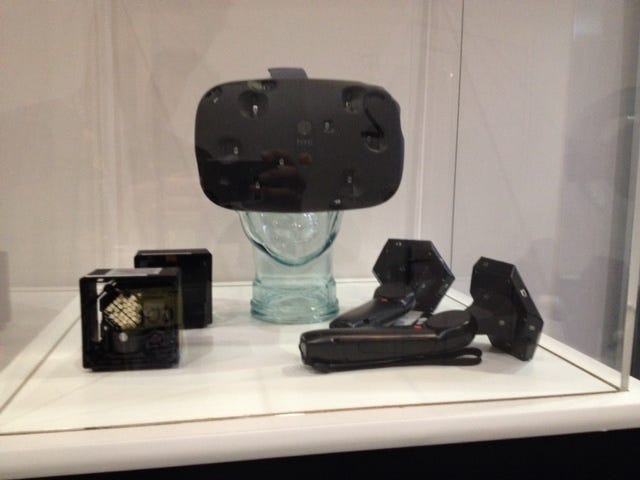 Certainly the best showing (and also featuring a robot) was the final demo that put you in the shoes of a robot repairperson, set in the Portal universe. Like a lot of the other demos, the design placed an emphasis on encouraging players to put their "face" right up close to detailed items (in this case, robot parts) in order to examine them.

The prototype controllers are represented in VR as whatever developers want (e.g. hands or tools), and since they sense tilt and other motion, as well as interactivity, are very flexible control solutions.

For example, in the art sculpture demo, players can hold down a trigger on the left controller to bring up a 3D menu system that you can rotate by twisting your wrist, and then select a new color or new tool by using your right hand, kind of like a futuristic palette. In many cases, new types of interfaces are going to be key to the VR experience. 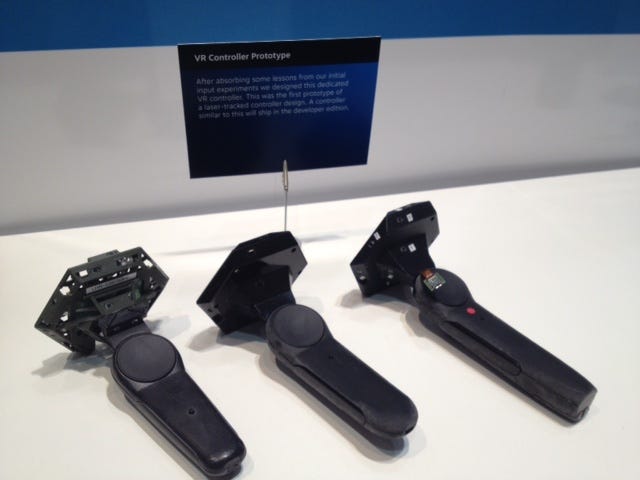 As for motion sickness, I'm quite prone to being carsick, boatsick, airsick, etc., but I didn't have too much of an issue outside of a couple seconds of wooziness during the final robot repair demo (I was in VR for about 20 minutes), which seems like a good sign for other people with motion sickness issues.

As an experience, the biggest drawback of the system wasn't motion sickness, but the multitude of wires. Of course, this is all a prototype, and like other VR hardware developers, getting rid of as many wires as possible is one of Valve's goals.

With multiple VR solutions hitting the market, Valve assured that developing games and porting them across other VR platforms is relatively painless and speedy, which is good news for developers, as Oculus, Sony, and Samsung are pushing their own VR initiatives.