Nvidia has announced that its ‘bring your own games’ cloud gaming service GeForce Now is to come out of limited beta today and that all 300,000 existing beta users will transition across to a free membership tier. The company will also introduce a premium membership with the first 3 months for free and a comparatively low $4.99 a month, a special introductory price guaranteed for the remainder of 2020.

The free membership product strategy solves the hurdle of maintaining the active userbase of GeForce Now as the service transitions across from beta to a full commercial offering, although there are limitations to the free tier which won’t please everyone who have been using the beta service.

‘Founders’ premium subscribers will get priority access to servers, will be allowed to stream for up to 6 hours per uninterrupted session (versus 1 hour for free members) and get access to the latest RTX ray tracing GPU-based servers in the cloud as they become available.

I expect the premium subscription pricing to increase, potentially to something like $9.99 a month, at the beginning of 2021, but at the current price point and 3 months free, conversion rate from free to paid is predicted to be high. GeForce Now effectively straddles the use cases of existing gaming PC users that want access to their games on screens away from their PCs and also those gamers that don’t have access to a gaming PC. Nvidia’s stated ambition is to grow the GeForce Now membership across free and paid accounts to 1 million as rapidly as possible, and I expect that to be achieved during 2021. 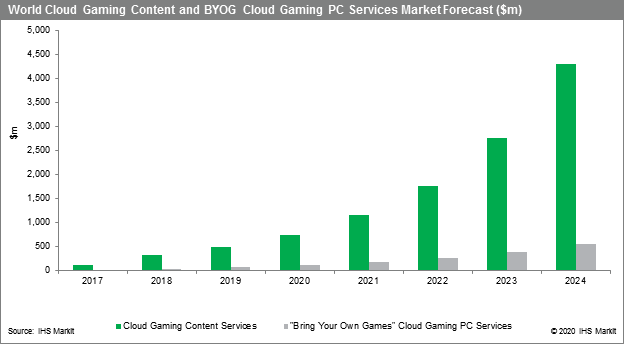 What is the immediate impact of this aggressive move?

In terms of users, the beta version of Nvidia’s GeForce Now was already by far the largest BYOG service operating globally with 300,000 users and a waiting list of 1 million. With its commercial launch, Nvidia will rapidly gain a chunk of the BYOG cloud gaming market even with a free tier alongside low monthly pricing – I forecast GeForce Now will have 17% share of the $57 million BYOG cloud gaming PC subscription market in 2020.

In subscriber number terms, by the end of 2020 GeForce Now is forecast to have 280,000 premium subscribers and to be significantly bigger than the current front runner, Blade, which operates the Shadow service in the US and Europe. Shadow currently costs $35 a month in the US for access to its cloud gaming PCs, so Nvidia’s launch will have an immediate disruptive impact on Blade’s competitiveness. In fact, Nvidia’s aggressive pricing move will put a squeeze on all other BYOG services across North America, Western Europe, Russia, South Korea and Japan.

Nvidia’s decision to adopt a free membership tier is likely a response to Google, which is set to launch a free version of Stadia sometime during 2020. Google has faced criticism for its lack of supported games, so Nvidia’s BYOG service, which currently supports instant play of over 300 of the most popular free and premium PC titles and over 1,000 other games which can be selected for single session install, is a significant competitive threat.

Profit is the last thing on Nvidia’s mind

A cloud gaming service with free membership and no supporting monetisation model such as advertising, no revenue share from content sales, and a low-cost premium subscription too low to cover the cost of usage means that GeForce Now will not be delivering a profit for Nvidia any time soon. Indeed, the cost of ongoing service delivery, investment and maintenance of infrastructure will mean significant ongoing cost to Nvidia. As such, this is not a sustainable commercial business model and is primarily about moving rapidly and consolidating a significant presence in the GPU-based cloud opportunity. In time, Nvidia will be prompted to introduce other forms of monetisation and increase subscription costs if it wants to generate any sort of margin.

Like other gaming PC component companies, cloud gaming has the potential to disrupt Nvidia’s existing business. Generally, cloud gaming could progressively shift the balance of the acquisition of PC gaming hardware from the end-user to the datacenter, may even drive additional hardware sales if demand spreads more widely, and Nvidia needs to make sure it is well positioned to follow this transition and take advantage of it. In this sense it’s a strategic move that pre-empts this market shift.

However, Nvidia’s GeForce Now strategy goes beyond preparing for this market threat. The potential broader industry disruption caused by cloud gaming services – to console companies, and PC gaming storefronts for example - also allows companies that previously had a limited role in the games value chain to expand their influence.

Nvidia sees an opportunity in providing its own GPU-based cloud and building a service business on top of this infrastructure. Nvidia operates nine datacenters across North America and six across Western Europe. Where it has limited datacenter coverage – Russia, South Korea and Japan for example – it is partnering with local telcos to deliver GeForce Now. This telco partnership strategy aligns strongly with the roll out of 5G services especially in mobile-first markets such as Japan and South Korea.

Games may only be the start. Demand for GPU-based servers across high performance computing, AI, desktop virtualisation, and analytics applications are on the increase, so gaming may act as a trojan horse for Nvidia’s broader push into specialised cloud services. As other technology companies have found, tapping into the service opportunity offers a more stable revenue stream, and often has a better margin than physical products.

While GeForce Now supports 100s of top PC games, during the service beta numerous games have had their support dropped or removed due to publisher requests. The increasingly complex landscape for PC content release windowing, exclusivity and PC storefronts is likely to generally decrease the availability of games on ‘open’ BYOG cloud gaming services like GeForce Now moving forward. This will be exacerbated by publishers and storefronts evolving their own direct-to-consumer cloud-based services. It’s also possible of course that GeForce Now could itself be leveraged as a distribution channel by third-party gaming services, in a similar way to Ubisoft’s Uplay+ which is coming to Google Stadia, and that could lead to a B2B revenue stream for Nvidia.