Rather than add to my backlog, I took some time to circle back and spend some time with games from 2018 that I might've overlooked during yet another year packed with wonderful releases.
Alissa McAloon
Editor-in-Chief
December 30, 2019

It’s been pointed out to me that every single year I do one of these lists, I start things out by running down a list of the games I didn’t get time to play and rarely get the time to circle back and give those games a go.

So rather than add to that list and run down what I did and didn’t play of this year’s releases, I took some time to circle back and spend some time with games from 2018 that I might’ve overlooked during a year packed with wonderful releases.

That all being said, 2019 also just happened to be a great year for video games and I feel like I should at least mention some of the best of the bunch I was able to drop time into. Studio ZA/UM’s Disco Elysium is easily my personal GOTY and does some really incredible things with the traditional skill-based framework set up by generations of RPGs before it.

Untitled Goose Game and Baba Is You both led to some incredible party play sessions, in one case huddling around the TV to watch friends become a horrible goose for the first time and in the other shouting absolute BABA IS WIN nonsense at the screen to help solve an impossibly creative set of rule-bending puzzles.

You’ll find those and other wonderful games from this year like NeoCab, Outer Wilds, and Control on other Best Of lists around Gamasutra, so instead let’s take a look at the games from 2018 that beat the odds and managed to escape my backlog. 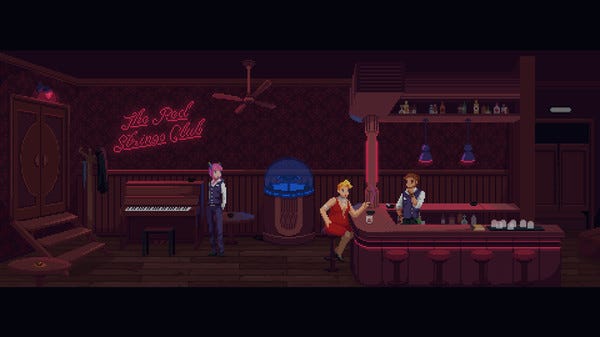 Red Strings Club is one of two adventure games that made it on to this list, but its quite different from the other found further down the page. I’m big into games that let you talk your way down different paths, using information or other subtle nudges to steer conversations from one branch to the other. The three playable characters in the cyberpunk world of Red Strings Club all have their own ways of doing this to a certain extent. As my favorite of the three, the bartender Donovan, you’re able to mix drinks designed to alter the emotional state of a patron, affecting how receptive they are to certain questions. The android Akara-184 has the opportunity to install personality-altering implants into key characters that could affect how future encounters play out. With different mechanics affecting the conversations at the core of Red Strings Club, it doesn’t feel that you’re brute forcing your way through every conversation option to push to the end of the game. Rather, you feel as if the nudges made a certain drink or implant have an impact on the turns the story takes, which is both rewarding and challenging all at once.

Red Dead Redemption 2 landed itself on my best of 2018 list last time around for its charmingly mundane moments more than anything, and it’s that same sort of feeling that brings its online variant on this year’s list. Online comes with its own story, along with the ability to rope friends into a posse to complete said story missions, competitive online races or shootouts, or just roam freely throughout Red Dead’s massive map together. I find myself free roaming most of time, working my way through bounties or hunting game to stock up my trading business for Online’s career-like pursuits, sometimes inviting a friend along to track down targets while we catch up over voice chat.

What’s most endearing about Red Dead Online however, is its surprisingly docile community. I imagine it’s mellowed out some since the game’s first debut, but nine times out of ten,an encounter with another player online ends in a friendly emote rather than a shootout. It’s a refreshing shift from the disruptive, rocket launcher laden chaos that soured Grand Theft Online for me way back when, and a key part of why Red Dead Online has become the new live game in my life.

My first exposure to Paratopic was through a story Gamasutra ran last year detailing the lengths its developers went to instill this unsettling feeling throughout the entirety of their game. That attention to sudden camera cuts, intentionally designed discomfort points, and a gritty low-poly look certainly pays off to deliver an experience that keeps you on the edge of understanding, never quite sure of your surroundings or safety in them. Not much is spelled out; you’re left only clues in the world to figure out who you are and what part you play in a story told through jump cuts from vignette to vignette. The game’s mundane moments—a conversation with a gas station clerk, an all-too-long midnight drive down a deserted highway—are what left me the most on edge, and sometimes confronted with subtle reminders of more sinister elements at play just off camera. The best kind of horror uses unease as its baseline and keeps players asking questions as they push forward, both qualities Paratopic embodies masterfully. 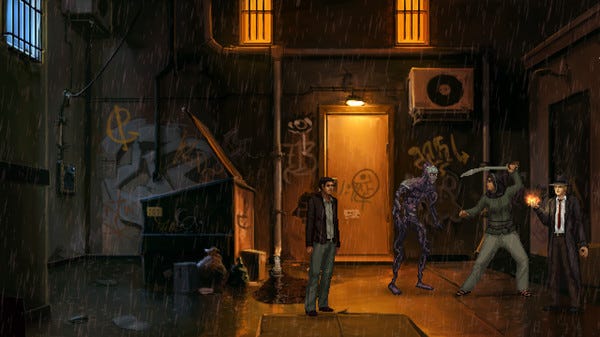 After hearing praise for Unavowed throughout much of 2018 and into 2019, I finally bit on WajetEye Games latest and revisited a love for point-and-click adventure games fostered by the several strange Sierra Games titles I happened upon as a kid. Unavowed’s puzzles are sparse but just difficult enough, and reward you for keeping a pen and paper close by. Its incredibly character driven nature is what stands out about Unavowed, both from the narrative and gameplay perspective. Only two members of your team of four can come along to solve each supernatural mystery, and the varied skills each brings to the table shifts what information you’re able to work off of, and where you’ll get it from. Every conversation is fully voiced, lending an additional dose of personality to an already endearing cast and making the casual banter between teammates that takes place on the subway or outside a bar just as enjoyable as solving the case and down the monster of the week. 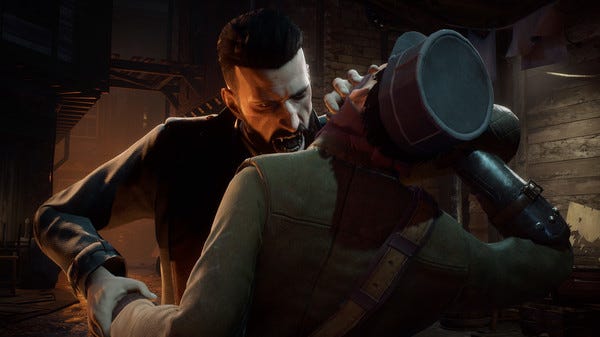 I need to admit upfront that I haven’t put as much time into Vampyr as I’d like quite yet, but after finally sitting down to play after well over a year of saying I wanted to give it a shot it’s already earned a spot on my best of list, and then some. I’ve got a soft spot for vampire fiction and video games already, but layering a well-executed morality system on top of that feels like a game tailor made for my interests. Conversing with townspeople throughout London is as vital as scrounging experience points for the next combat encounter. Each character you have the option of feasting from has their own web of relationships throughout the city, their own personality and connections laid out by a wonderfully expansive chart in-game. Decisions both including and beyond feeding choices leave a lasting impact on the city and each of its districts, taking Vampyr’s concept of morality beyond just a red-to-blue slider into something tangible in the game’s gritty world.