Apple Arcade's curated library launched with a number of captivating titles, and those ever-growing ranks include several titles that wormed their way into the daily lives of Gamasutra's editorial team.
Alissa McAloon
Editor-in-Chief
December 27, 2019

Apple debuted Apple Arcade earlier this year on iOS, iPadOS, MacOS, and TVOS as a way to sort of level the playing field between free-to-play games and premium experiences, as far as player attention goes. It’s far from the first pay-for-access subscription library of its kind, but the platform-bound nature of the Apple device-exclusive service, and the semi-exclusivity of many of its games, made Arcade an interesting space for mobile games in 2019.

The impact the $5 per month subscription model stands to have on mobile games as a whole in the long run is something to keep an eye on in 2020 and beyond, but in the shorter term developers look to have benefited from signing on with an Apple Arcade project, with Apple reportedly paying out hefty sums to fund the development of games headed to Arcade.

Apple Arcade’s curated library launched with a number of captivating titles, and those ever-growing ranks include several games that wormed their way into the daily lives of Gamasutra’s editorial team and our various devices. So on top of our usual Best of 2019 coverage, here are editors’ personal picks for the best games currently on Apple Arcade.

There are few action games on mobile phone that are as responsive and mechanically sound as Luis Moreno Jimenez's Bleak Sword. In fact, Bleak Sword's combat is just as good as a lot of traditional controller-based action games. Its impressively intuitive one-thumb dodge-block-attack gameplay and unforgiving death loop together serve as a worthy tribute to Dark Souls, while the simple, beautiful pixelated graphics and animations set a tone that turns your phone screen into a window to a foreboding world that you want to come back to over and over again. Bleak Sword shows that when a designer truly respects the constraints -- and capabilities -- of a game's respective hardware, small miracles can happen. 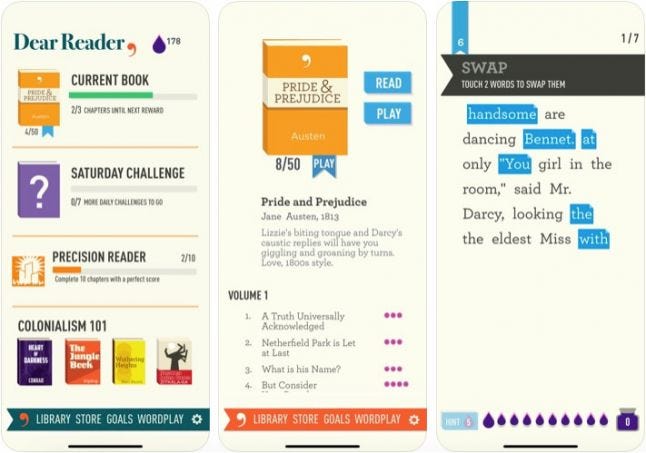 Dear Reader takes troves upon troves of literature and combines that wealth of source material with its own varied word-based puzzles to create a game that’s as difficult to put down as a good book. One puzzle might task you with arranging lines from a chapter Pride and Prejudice into the proper order, another might see you removing errant words from an Emily Dickinson poem. It can be an interesting way to piece apart otherwise familiar works while playing on the more leisurely difficulty, or a challenging way to flex your literary know-how on higher, timed difficulties. But all in all the nature of the puzzles themselves offer a fun way to explore each book, whether it’s your first time seeing that particular story or you’re working your way through an old favorite. 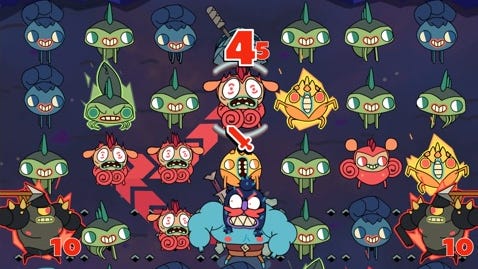 Like many great games, there was a lot of time between the initial idea of Capy's Grindstone and actual release but it was absolutely worth the wait. Grindstone is a star of the newly launched Apple Arcade and for good reason. It is a finely-tuned, immensely satisfying puzzler that is a bit like strategically setting up a zigzag of fleshy dominoes, knocking the first one over and watching them burst in colorfully gory explosions. It's puzzler perfection.

In Guildlings, Sirvo Studios brings the same design sensibility that made Threes a phenomenon to reinvent the classic turn-based RPG for the mobile format. Made to be played in portrait mode, Guildlings embraces the 'chill and relax' goal that most phone games are designed for. Its aesthetic is a clever mix of fantasy vibes with chill modern life and its characters jabber at each other like kids at play on a Saturday afternoon. It's relaxing, it's charming, and it's a fantastic reinvention of a classic game genre that adapts to the mobile format not only in its controls, but in the adventure it delivers for players. 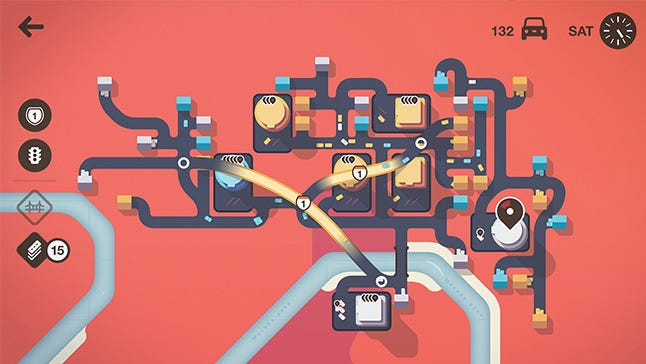 I hate cars. I hate how they get stuck in traffic jams. I hate the fact those yellow ones insist on crossing that goddamn river. I hate that they don’t use the motorways I want them too, and how they need traffic lights to get ANYWHERE in a vaguely orderly fashion. I hate this game and I love this game. This gorgeous, frustrating, chaotic, unbeatable video game. That’s the maniacal beauty of Mini Motorways. No matter how much you try, you will lose. The very vehicles you’re attempting to chaperone from A to B will betray you like the Caesars of old. Stabbing you in the back with a congestion-shaped knife. And then you’ll come back for even more punishment. This time you’ll believe that maybe, just maybe, you’ll be able to build a road network worthy of song. A Michelin star spaghetti junction that could be served up to Massimo Bottura himself. You won’t, of course, and after enough attempts you’ll realize it’s not the high scores or pursuit of perfection that makes Mini Motorways great -- but rather it’s ability to make you believe the impossible is finally within reach despite all the failed attempts. Just one more go, you'll whisper, before cursing the very roads you built. One. More. Go... 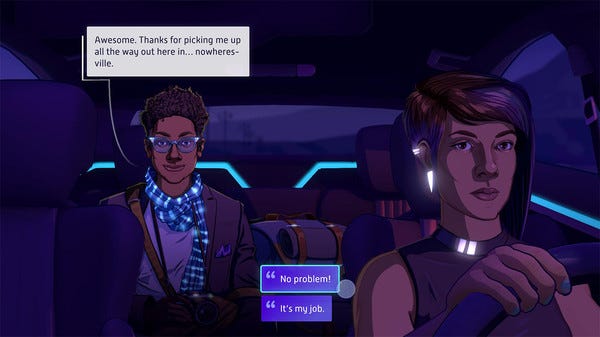 In the game’s relatively short development cycle, its story about being the last human rideshare driver in a fictional city dominated by driverless cars has only felt more current and more urgent. If Heaven’s Vault gives us a fresh take on the adventure game, Neo Cab is a radiant revision of the visual novel. Told through a sequence of vignettes in the form of different fares, and with a dash of resource management thrown in, you exercise choice in part through who you pick up, where, and when you decide to stop, as well as whether you prioritize personal contacts over fares. It’s slick, beautifully done, and shockingly well written at times with biting satire of tech culture, urban progressivism, late capitalism, gender norms, and much besides caught in the game’s low cyberpunk glow. On that note, this is a game that remembers what that punk part of “cyberpunk” means and lays the stress on it. Neo Cab a neon satire of the gig economy that is not to be missed.

Sayonara Wild Hearts is a beautiful pop album wrapped in neon, a Rez-tier rhythm game with a killer soundtrack, and a striking example of how music and game design can take each other to new heights.

As usual, it’s like nothing else Swedish developer Simogo has ever made, and more importantly, it’s like nothing else you’ll find on the App Store. Blending luscious, hungry electropop beats with vibrant imagery that evokes everything from Killer7 to the Major Arcana, Sayonara Wild Hearts is an Apple Arcade must-try; you can see most of what the game has to offer in an hour or two, and if you love the music (available as an album from composer Daniel Olsen) the levels add a wonderful new dimension to the experience of relistening to a favorite album from start to finish. 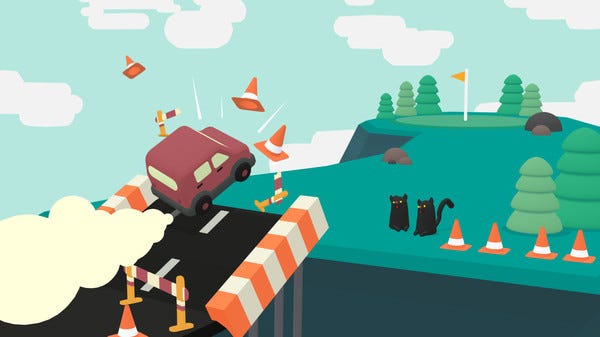 What the Golf? (Triband)

What the Golf is a game a about breaking expectations, building up new ones, and breaking them all over again. The game, and its first level, starts off with a simple gag: instead of opening the game by hitting the golf ball off the tee, the moment of impact of club against ball instead flings the golfer forward and your goal becomes propelling that rag dolled figure to the hole for victory. Each and every level offers some different play on the idea of golf along those lines, to an extent that seems infinite. It’s an interesting example of endlessly iterating on an idea until it takes on a life of its own and somehow, even after dozens of holes, still manages to surprise and find humor and fun in an ever-evolving gag.