From shockingly dark visual novels to infinitely cheerful golf adventures, I managed to play a healthy variety of wonderful games in 2017 despite nearly doubling my backlog at the same time.
Alissa McAloon
Editor-in-Chief
December 18, 2017

Alissa McAloon (@Gliitchy) is a news reporter for Gamasutra.

I'm eyeing a Nintendo Switch-shaped box under the Christmas tree as I write this, which unfortunately means I wasn't able to see what all the hubbub about The Legend of Zelda: The Breath of the Wild or Super Mario Odyssey was about before naming my top games.

But, unlike last year, I did play a healthy selection of this year's releases despite adding another page to my backlog in the process. Given infinite time, there easily would have been another five or so entries on this list since 2017 saw the release of so many impressive games.

Persona 5 is still sitting unfinished on my PlayStation 4 with Bethesda's Prey right beside it. I was also really hoping on getting to Night in the Woods and The Sexy Brutale before sitting down to name my top games, but unfortunately, it looks like I won't be getting to those until after the holiday.

Of what I was able to play, six titles stood out to me in 2017 though I'll likely be playing the rest of this year's best releases for most of 2018 just to catch up. 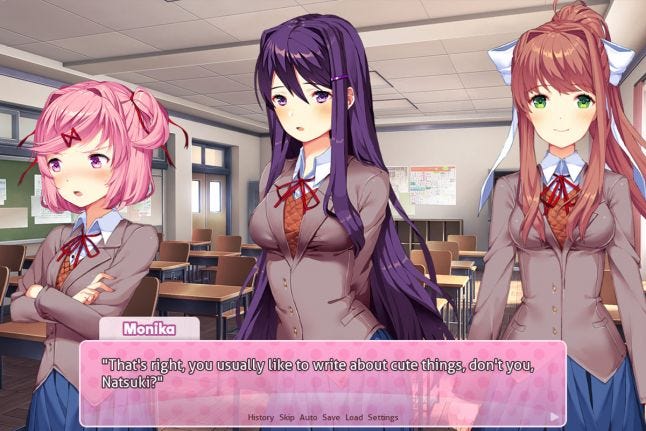 Doki Doki Literature Club is a game better played than explained. On a basic level, the game flips typical visual novel gameplay on its head to create what turned out to be one of the most unsettling horror games I've ever played. Team Salvato expertly plays on those preconceived expectations of what a dating sim-type game usually offers and then distorts those very expectations to create the kind of game that displays two very, very important content warnings before you're even able to access the main menu.

The story naturally gets dark as you near the end of the first playthrough and crosses over into pure psychological horror shortly after that. But, and definitely skip the rest of this paragraph if you plan to play DDLC at some point, the way in which the game warps is unexpected to say the least. After that first time through, subsequent playthroughs are altered as both the fourth wall and the sanity of once happy and welcoming characters start to deteriorate all while the game itself seems to be coming apart at its seams. The way in which these changes are reflected in-game start to very quickly enter the realm of unsettling and leave you with a sense of dread even when nothing is noticeably awry. Following that turn and eventual decay, the mechanic for actually completing the game would be incredibly clever if it didn't play into one of my prominent childhood fears.

To say the very least, Doki Doki Literature Club is an incredibly unique horror game wrapped up in a perfectly deceptive shell and I can't get its creepiness out of my head.

What Remains of Edith Finch by Giant Sparrow 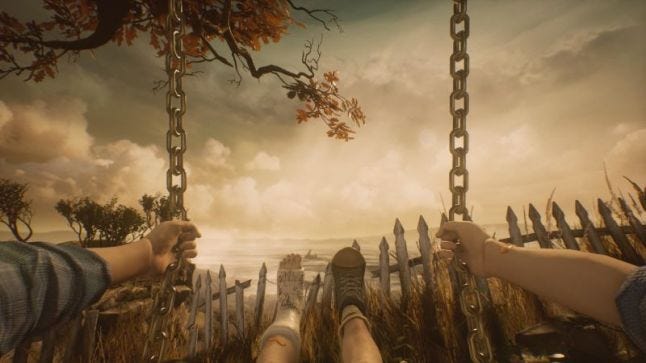 For whatever reason, 2017 was a powerful year for games that offered a serene sort of reflection on the inevitability of death and What Remains of Edith Finch is certainly at the head of that pack. Following the death of her mother, Edith Finch returns to her childhood home to collect the stories of the long-deceased family members that once inhabited its many, many rooms. Each story is told as its own, individual game with a theme carefully crafted to fit the life (or death) of the character it's exploring.

The early stories of family members generations back start out whimsical, with their dark twists somewhat obscured in the way that stories handed down through generations tend to be. But as Edith makes her way through the memorialized house and closer to her own branch on the family tree, the somewhat lighthearted joke about the Finch family curse gives way to a deeply emotional tale about trauma, family, and the complications that surround both life and death. 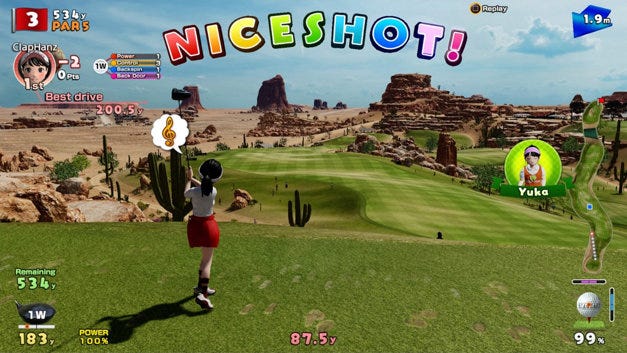 Hot Shots Golf 2 was a PlayStation 1 staple in the McAloon household way back when and Everybody's Golf is set to become the same 18 years later. Everybody's Golf is the latest Hot Shots game and is the perfect mix of relaxation and challenge in video game form. There's a character creator with unlockable gear, a campaign mode where you can progress throughout tournaments and boss challenges, and a local multiplayer mode that lets you compete against your younger sibling, a la your Hot Shots Golf 2 days.

To my surprise, the bulk of the game's playability is found in its online lobbies. There's a healthy community of online golfers logging in daily to collect daily golfing bonuses and vie for top scores on each course. Each course is its own open world level where players run around, hunt hidden items, and interact with each other through a variety of golf-themed emotes and surprisingly friendly on-screen keyboard-powered conversations.

Everybody's Golf is the exact dosage of pure, relaxing happiness I think I needed this year. And the theme song is legitimately a tune that that starts off chanting 'fun' so really, what's not to love here? 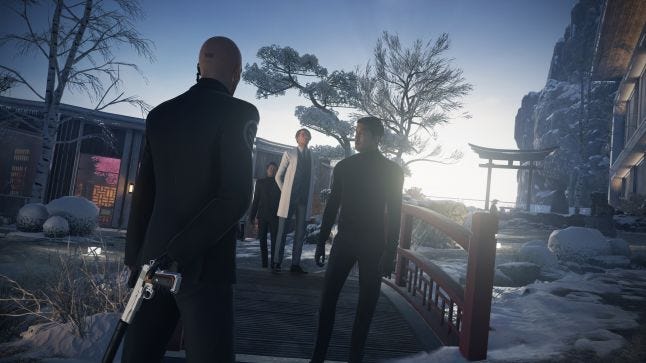 IO Interactive's episodic Hitman game got its start in 2016, but I'm working it into this year's top games since the Complete First Season got its own release this past January and that's the version I picked up. But given how amazingly good Hitman is, I'm sure I would've found a way to put it on both my 2016 and 2017 lists if I had picked it up back when the first episode released.

I've been playing Hitman at least once a week (but usually more) for nearly four months now. If I'm not playing the game, I'm checking out streams and YouTube videos to watch other people play Hitman. With any other game, that much exposure would be extremely tiring but the sheer amount of content in Agent 47's latest romp creates a game that is equally as fun to learn as it is to play.

Each of the game's five levels has a million things going on at once as an impressive amount of NPCs scurry about their various day-to-day tasks. While there are guided opportunities that give players step-by-step instructions on how to perform creative assassinations, the game doesn't limit you to those specific objectives. Instead, you're encouraged to study the routines of your target and background characters alike and construct your own paths and plots to complete the level.

It's a highly-replayable format that isn't new to the Hitman series, but this latest game is able to build on that already impressive platform through challenges that introduce new targets and conditional modifiers into the mix as well as social features that allow other players to create and share assassination contracts in-game.

And, astoundingly, IO Interactive both is alive and retains the rights to Hitman following its departure from its previous owner, Square Enix. Since the studio agreed to a management buyout in June, it has gone on to release a Game of the Year content pack and confirm that, thankfully, the series will continue to move forward. 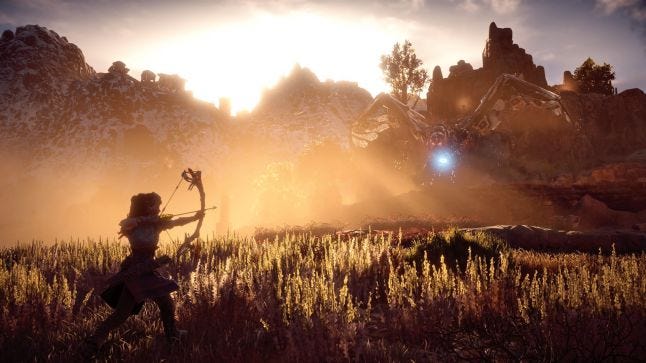 I can't remember a time a game has made me stop and take a moment to appreciate its world before Horizon Zero Dawn. Multiple times, I've completed a quest or finished looting a downed enemy only to turn around and take a moment to admire the colors spread across the sky by an approaching sunset or the shadows cast by a coming storm.

The world, characters, and stories of Horizon Zero Dawn are just as compelling as the breathtaking vistas you seem to happen across during otherwise routine tasks. Guerrilla Games' big departure from its Killzone series is an open world, post-post-apocalyptic game where nature has reclaimed the structures of modern civilization and massive machines roam about like wild animals. There's something to be said about the sense of accomplishment you feel after single-handedly taking down one of the larger metal beasts wandering the world after stealthily laying traps across its path and disabling its weaponry with carefully placed arrows. Even with its place cemented on my top games list, I'm still scouring the map in Horizon Zero Dawn for activities, just to make sure I experience as much of this game as possible.

Life is Strange: Before the Storm by Deck Nine 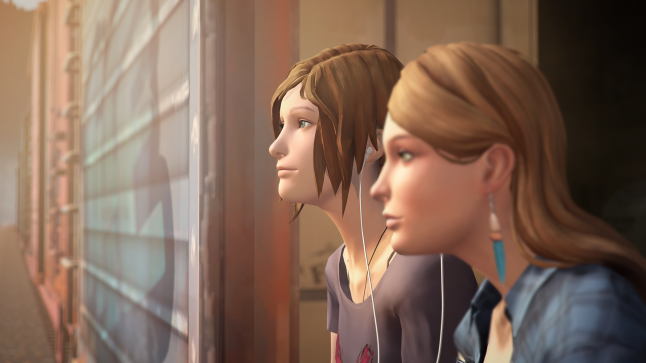 I'll admit I was apprehensive about how well a prequel to Dontnod's original Life is Strange would play out, but two episodes into Deck Nine's Before the Storm that apprehension has all but vanished. The standalone, three-episode-long story has a different protagonist than the original series but largely deals with settings and characters you've already been introduced to in the preceding game. As such, you walk into Life is Strange: Before the Storm with preestablished feelings on characters and, in some cases, prior knowledge of their eventual fates.

This setup could've easily crippled the storytelling capability of a choice-driven game, but Deck Nine's take on the universe instead uses those preconceptions to expand on each of those characters in a way that gives your choices weight while still allowing those decisions to jive with the people you already know these somewhat rebellious teens will later become.

That being said, I've yet to feel like the game is forcing my hand and pressuring me to make decisions that are expected by the characters presented in the original Life is Strange. While the game does give players options to take conversations and interactions in vastly different ways, each choice I make seems to seamlessly fit the version of the character I had already created in my mind without even a moment of arm-twisting or laborious "what would Chloe do" thoughts. The original Life is Strange gave players the ability to subtly define the interpersonal relationships of its protagonist in that same organic way, and that's something Deck Nine has impressively woven throughout each conversation of Before the Storm.