There's nearly 2000 words' worth of opinions about 7 games of the year here, and you can read them with just one click. Talk about a bargain!
Alex Wawro
Blogger
December 20, 2017

Alex Wawro (@awawro) is still, somehow, an editor at Gamasutra.

As I try to look back across everything that happened in 2017 and try to focus on the games that stood out, the ones that stay with me, I fixate on the ones that made me feel something meaningful.

This year I was often all too eager to switch off the calculating, analytical parts of my mind and stimulate the bits that like to feel things, especially things that were exciting or eye-opening or anything but tense and draining.

Every game listed below is fantastic, a credit to those who made it and an example of what a great creative team can accomplish.

The Legend of Zelda: Breath of the Wild by Nintendo EPD

Nintendo's new Zelda game is a critical darling, a commercial star, and a pillar of most Game Of The Year conversations. It also made me feel like a kid again. For the first time in two decades, I found myself exploring every nook and cranny of a game, making my own fun because I didn't want it to end.

I don't think these are feelings that games should aspire to evoke, but for me they're so rare and bewitching that I have to add my voice to the chorus shouting: hey, that new Zelda is pretty great.

For weeks, my partner and I spent evenings cheerfully puttering through the nooks and crannies of Breath of the Wild, passing the controller between ourselves and pointing at what lay over the next rise. Neither of us are particularly fond of Zelda games, but this game charmed us both with its scope and heart. 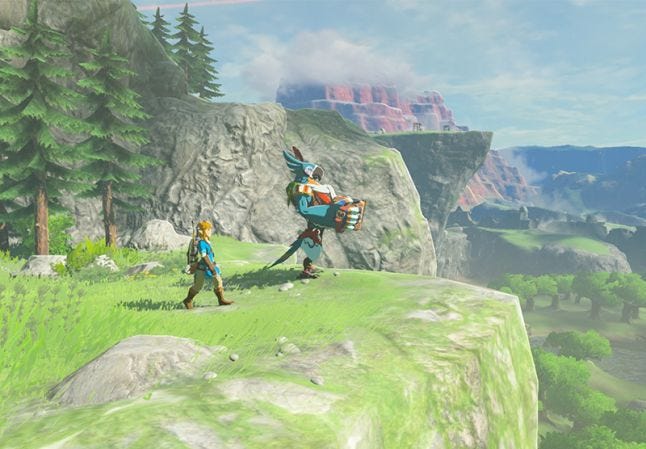 You know that feeling you get sometimes, when you put your foot down expecting something solid -- and find nothing but air? I get it mostly when stepping off a curb, or taking the stairs; in that split second the heart skips a beat and the mind reels, scrambling to figure out where the edges are.

I love that feeling. Sometimes, if I'm lucky, a game can make me feel that way too. Breath of the Wild seems designed to evoke exactly that sensation, over and over, starting with the moment you look out over the edge of the Great Plateau. It's the most satisfying Zelda game I've ever played, and a remarkable achievement for the team at Nintendo.

Arkane has proven itself a master -- perhaps the master -- of first-person game level design, and Prey is one of its crowning achievements.

In so many ways, it's a game about space: the space beyond our stars, the space between people, the spaces you have to cross to get where you need to go.

I'm one of those goofs who gets excited about Warren Spector's pitch for a game that takes place entirely in one painstakingly-crafted city block. Years ago, departed Arkane cofounder Raphael Colantonio said that the studio was founded to make just that sort of game; Prey is not that game, but it does all take place across and around one painstakingly realized space station, and I love it. 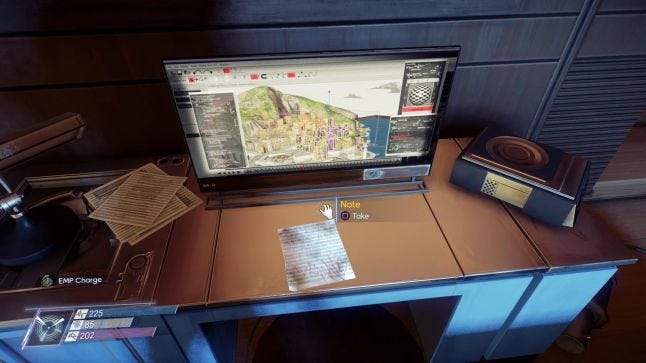 I love that you can learn the Talos I station, master its spaces, and go from any point in space to any other at any time. It helps to know the path, but you don't need to; if nothing else, you can jet free of the station, cut your own path through the surrounding space, and rejoin it in a better place.

There's a lot more to love about Prey. It has a fantastic opening, interesting choices, and a level of challenge that ensures most players' journeys will be unique smorgasbords of failure, triumph, and skin-of-the-teeth survival. It both celebrates and surpasses so much of what made the System Shock games great. It has interesting characters, and not all of them are dead.

But what I love most about it, looking back now, is that sensation of pushing Morgan's face up against the glass of Talos I, seeing my destination just beyond the curve of the station, and feeling so excited to cross that horizon.

I love Tacoma for much the same reason I love Prey: it plays out in a fantastic, holistic setting that's painstakingly realized.

But where Prey's space station is carefully constructed to afford players space to tell their own stories, Tacoma Station is saturated in the drama of its crew. Every object, every stick of furniture, every bit of space-age rubbish feels carefully placed to tell a very human story.

Tacoma Station makes manifest a mundane sci-fi future in which humans travel the stars, indenture themselves to megacorps, and form emotional bonds with artificial intelligences. It's a great staging ground for all the drama that plays out during the game, but honestly, the thing I remember best was feeling excite to find a new area so I could rummage around and look at all the weird stuff. 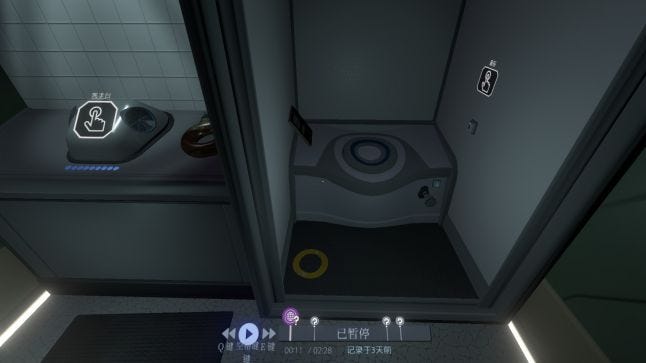 I loved the stories and characters you uncover on Tacoma Station, but what I'll remember most in the years to come is that sense of place.

Everything by David OReilly

A few years ago, some of the folks who made Panoramical published a deep dive into how that game affords players control over imagery and sounds "as a conductor in a quasi-­totalizing fantasy of cyborg unity."

The whole article is worth reading, and at the end they closed it out with a coda excerpted from the book "Dropping Ashes on the Buddha: The Teachings of Zen Master Seung Sahn."

It's the story of a seven-year-old named Gita confronting the death of a beloved cat, and since space is effectively free on the Internet I'm going to take the liberty of reprinting it here:

“What happened to Katzie? Where did he go?”

Soen­sa said, “Where do you come from?”

“From my mother’s belly.”

“Where does your mother come from?” Gita was silent.

Soen­sa said, “Everything in the world comes from the same one thing. It is like in a cookie factory. Many different kinds of cookies are made — lions, tigers, elephants, houses, people. They all have different shapes and different names, but they are all made from the same dough and they all taste the same. So all the different things that you see — a cat, a person, a tree, the sun, this floor — all these things are really the same.” 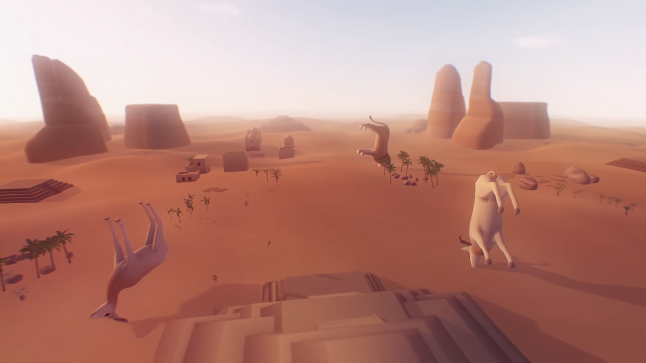 This, to me, is Everything. The latest game from David OReilly and crew is an attempt to express ineffable truth through an interactive medium. It's a game that can play itself. It's a kind of koan you can roll around in. It's a great thing to leave on in the background during a party. It's a nice thing to do while you listen to some good Alan Watts talks.

I have very fond feelings for Everything, in large part because I was in the right place at the right time to appreciate its vibe. During a year in which the world seemed hellbent on drawing lines, building walls, and picking fights, Everything was a constant reminder that all of it is noise.

Night in the Woods by Infinite Fall

Night in the Woods is a game about anthropomorphic talking animals, and the stories it tells are more human, more relatable, than just about anything I saw in other games this year. 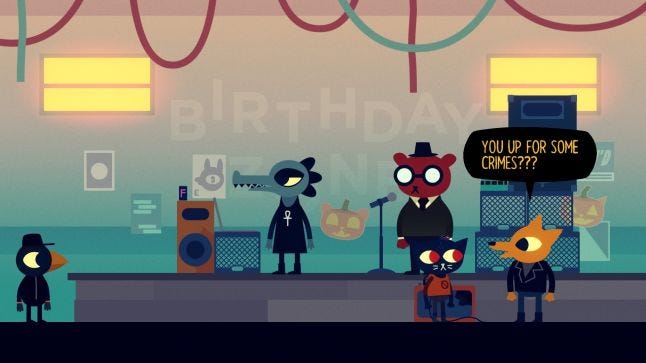 This game commits to a very specific tone so completely that if it resonates with you, as it did with me, playing through it can be almost painful. By the time I was done with Night in the Woods I felt like I'd grown up with each of the characters, knowing them as well (and as poorly) as I knew all the friends I'd left back home.

To me, Pyre is beautiful. Supergiant weaves the music, the ideas, the art, the characters and their stories into something that feels greater than the sum of its parts. 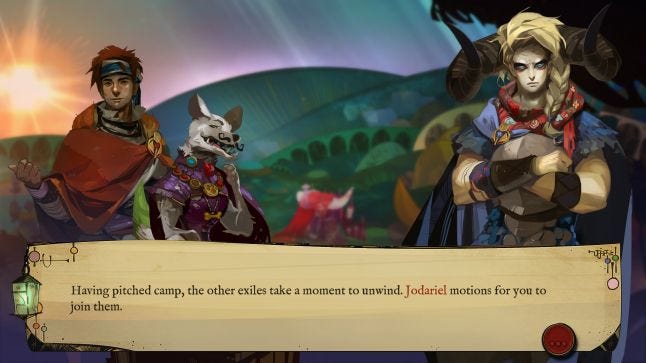 I also appreciate that in so many places Pyre surprised me, striking off in a completely different direction than I expected. Characters who at first seem cruel or foolish become relatable, even likable; opponents are sometimes so sympathetic you find yourself kind of hoping they'll beat you, because they deserve a win; losing can be the best thing that happens to you; the people you save can't always save you.

Pyre is a triumph, and easily the most interesting game Supergiant has ever made. The fact that it's all bound together by what's basically a supernatural NBA Jam-alike is just icing on the cake.

Battlegrounds lurks at the end of this list because for most of the year it has lurked in some corner of my mind, always ready and waiting to whisk me away to a remote, remorseless rock in the sea.

I've spent more time in Battlegrounds than in any other multiplayer game ever made. I played it yesterday. I'll play it again tonight, and this time next year I'll probably still be thinking about it. 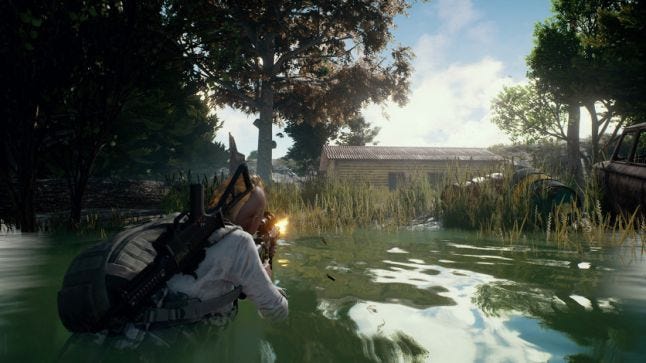 I love this game because it is, for me at least, a place of catharsis. This year it so often felt like we were inching, closer and closer, towards a future where everyone is isolated and forced to fend for themselves. When that feeling grew too strong, I'd fire up PUBG and get it over with.

There's something deeply satisfying about leaping from the plane at the start of every match; you pick your spot, you jump, and then you focus on nothing but your environment. You consign yourself to what comes next, and you stop thinking about anything but.

Games I Bet Are Great And I Would Have Loved If I'd Made Time To Play Them This Year: What Remains of Edith Finch, Gorogoa, Torment: Tides of Numenera, Divinity: Original Sin 2.

Shoutout To: Everyone who shipped a game this year.

Want to read more about the best of 2017? Don't miss our picks for the Top 10 Developers of 2017, the Top 5 Trends of 2017 and Top 5 Events that shaped the year. Gamasutra contributors also each wrote up a personal list of their top games, and you can read them here: Kris Graft, Alissa McAloon, Chris Kerr, Phill Cameron, and Bryant Francis.