SEARCH
A minimum of 3 characters are required to be typed in the search bar in order to perform a search.
Console
5 min read
article

Five Things You Simply must Know about the Nintendo Switch

The Nintendo Switch is the most eagerly awaited console launch of 2017. It's the latest generation console released from Nintendo - a Company well known for thinking outside the box.
Kerry Blake
Blogger
March 09, 2017

What is the Nintendo Switch

The Nintendo switch has been designed to be a hybrid games console. This means that it can be used as both a handheld console and a regular games console connected to your TV. There are several modes which can be used when playing games on the switch, these include Tabletop mode, portable mode, and TV Mode. TV Mode is where the console is connected to the TV by connecting it to the Joy Dock. it can then be played in single or multi player mode. Portable mode makes use of the consoles built in screen, while tabletop mode utilizes a built-in kickstand so multiple players can play games even when they're not at home.

The Switch uses Nintendo's own operating system and software which is automatically updated over the Internet. The user interface is very user-friendly and easy to navigate. It shouldn't take much getting used to, it is fairly intuitive. Games available currently include:

New releases are updating often, and you can find updates on nintendo.com.

The Switch sports a reasonable 6.5 inch screen which make it comfortable to use as a portable games console. The screen is, however, a bit too small for some types of multi player games. The screen itself is high definition, clear and very bright.

With portable games consoles, the battery life is extremely important. In the case of the switch, both the controllers and the console itself have built in batteries. The JoyCon controllers should last for 20 hours on a single charge. However, the console won't last as long. Depending on the game you are playing and how bright the screen is, the console should last for between 3 and 6 hours on a charge. Nintendo has stated that users can expect around 3 hours of battery life when playing Zelda or similar demanding games.

The console can be charged with a USB C port which is located on the bottom of the console. This should mean it's easy to keep it charged up, as long as you remember where you put the new style USB C lead. The console will also charge automatically when put into the Joy Dock. This is a really nice feature since the console will always be charged whenever you take it out of the house. 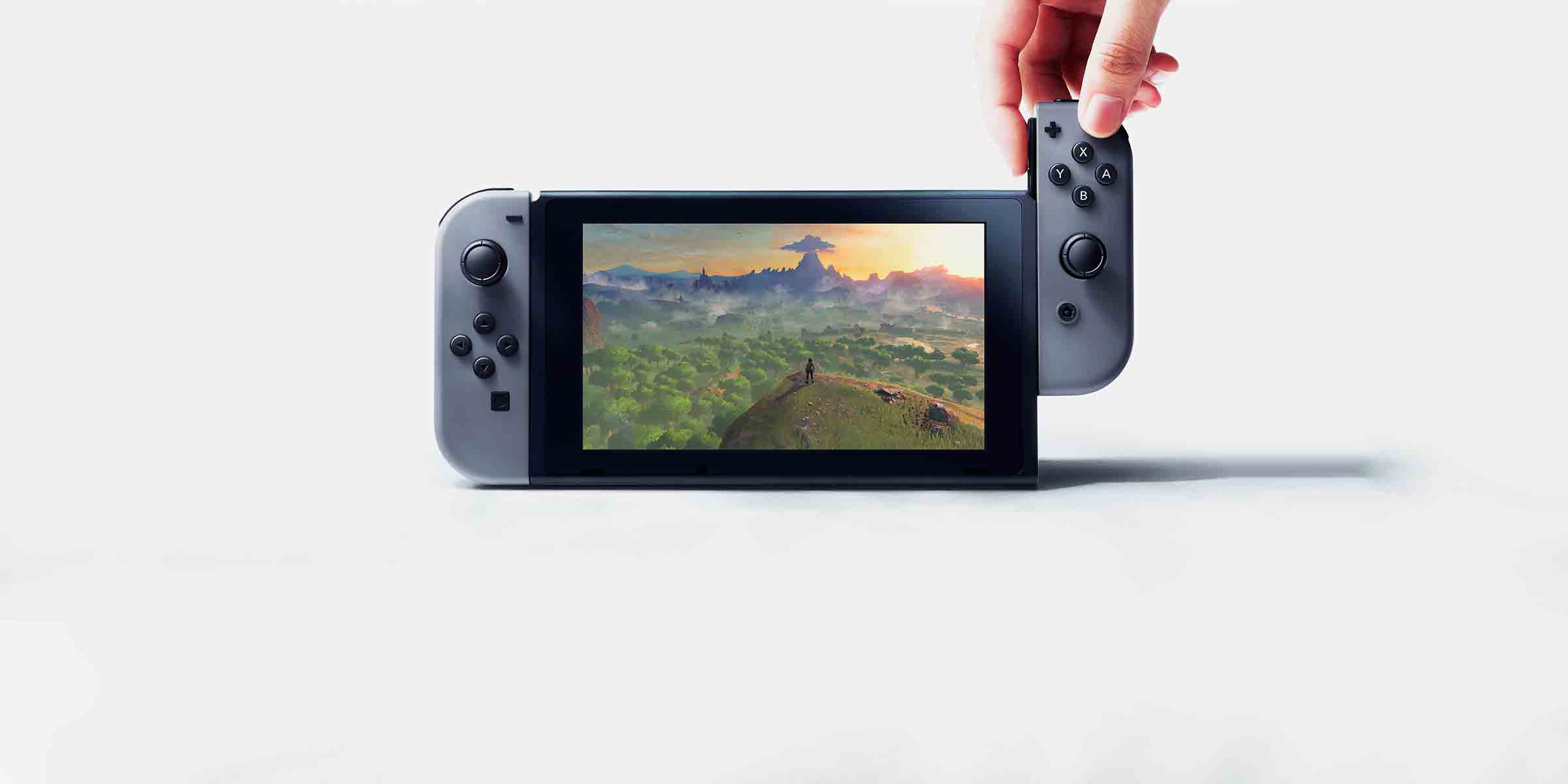 The controllers used for the Nintendo Switch are called JoyCon controllers. The controllers themselves are very well designed. They also pack a lot of features into a very small package. These include very realistic vibration which can simulate many different types of vibration. Controllers also feature built-in NFC readers and a state of the art IR camera sensor to detect gestures. What's more the controllers can be split in two and used as individual controllers. This is particularly helpful when using the console in a tabletop mode with friends.

The controllers can also be used with the grip which is included with the console. This makes the JoyCon controllers resemble a more conventional (and comfortable) console controller. Additionaly, a pro controler and a JoyCon wheel pair for Nintendo Switch can be purchased separately for a fair price.

Nintendo is still committed to the console format for their games consoles. These cartridges are called Game Cards and are slid into the top of the console. When inserted the game can then be launched. As well as buying games on game cards, it's also possible to buy digital versions of the games which can be downloaded when you are connected to the Internet.

The Nintendo Switch introduces many new exciting features for gamers. Just the ability to play a game on your TV, then walk out of the house playing the same game is pretty fantastic.

If you are, like myself, located in Ireland, you can buy the Nintendo Switch for just below €400 (http://www.littlewoodsireland.ie) or head over to GamesRadar+ who made a detailed guide for finding the best deals on Nintendo Switch consoles and accessories in the UK and American markets.

Whether or not it manages to knock the PS4 and Xbox One off the top spot will remain to be seen, this will depend on peoples experiences, and the number of games available, but it seams that is slowly taking over the world!