Apple has announced its own game subscription service, Apple Arcade, as a pay-for-access library of premium games for Apple platforms.

During a live-streamed event today, Apple detailed what the subscription service has to offer and shared a look some of the developers it’s already working with to get the platform off the ground.

The service is due out this fall in more than 150 countries and regions, but Apple has yet to announce anything on pricing quite yet.

Apple Arcade is rolling out as a tab in the App Store that will give subscribers access to their library right from that already-installed app. From there, players can download any of the services offerings (which will include 100 new and service-exclusive games) to their devices. Anything downloaded is playable offline as well and Apple says the titles featured on the service won’t offer any sort of ads or micro-transactions either. And, as an added bonus, all games on the service will be playable (and share progression) across iPhone, iPad, Mac, and Apple TV. 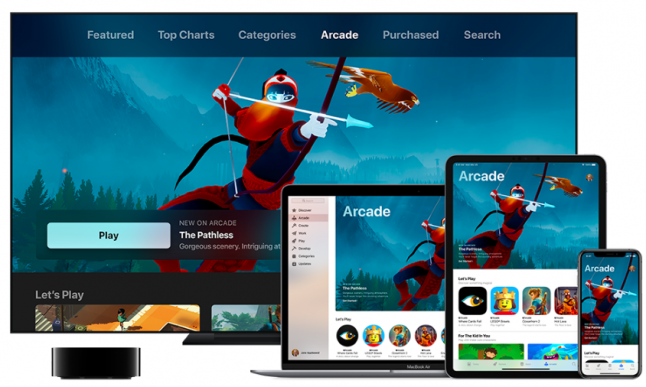 Doubling down on the data privacy theme of the entire presentation, Apple also notes that these apps “cannot collect any data about you or track any information about how you play their games” without a player’s consent. Privacy is one of several features Apple is leading with for this new service, alongside ease of use, expert curation, personalization, and family sharing features.

A handful of developers are already working with Apple to bring their games to the service, including the likes of Konami, PlatinumGames, Sega, Annapurna Interactive, Gameloft, Devolver Digital and several others.

All in all, Apple says that the App Store sees 500 million weekly visitors, and the most popular category on the storefront is games. The App Store alone hosts 300,000. So while, according to Apple, that makes iOS the largest gaming platform in the world, it can be difficult for premium games to get the same attention as their free-to-play counterparts. In Apple's eyes, this makes joining up with a streaming service a potential way for developers to get the attention of those players.

All in all, the company looks to be closely curating what ends up on Apple Arcade and notes that it's still interested in talking to devs that have a "groundbreaking, unreleased game" in the works. Developers that fall into that category can find more details on the Apple Arcade dev portal.