A Philosophical Look at the Art of Game Design

Today's post takes a high level look at one of the main ways that game design is an art form.
Josh Bycer
Blogger
August 02, 2017

Today's post is going to be aimed at a philosophical point about game design. The term "Game Design" and by extension "Game Designer" are very wide terms, because there is no one perfect explanation for either. Due to that, I want to talk about what makes game design different, and why this is both good and bad.

What is Game Design?

Creating a video game is different from any other programmable product in the world. Video games are the intersection between entertainment and programming, or in other words -- A combination of hard and soft skills.

You can ask a programmer about what skills are needed to be good at programming, or an artist about 2d or 3d modeling, because those are hard skills and teachable. However, tell me this: What are essential skills that will create good game design?  Before you answer that in the comments below, let me stop you and say that anything you type is wrong, and I'll explain why in a minute.

Just as there are no set guidelines for what is or isn't a video game, game design is just as mysterious. Yes, there are skills that can help with the development of a game; such as PR, project management and so on, but creating design of the game itself is another matter entirely.

We could get very philosophical at this point and start breaking down design genre by genre, but that's a little too big for this post. Returning to the point about entertainment and programming, let's move on to why game design is so exciting.

The "entertainment" side of game design is where we can discuss the beauty of game design. Creating a good video game is not just about making something that technically works, but is about making something engaging to the person playing it. What separates video games from other programs is that other programs just need to work; you don't need to be engaged to use a program like Turbo Tax or Photoshop.

Figuring out how to make a video game engaging is where the art of game design comes into play. No two video games (with obvious exception to clones) are exactly the same. For every design imaginable, there’s an infinite number of different ways of creating a game.

You could have a platformer where players control gravity to move (VVVVVV) or one where there is no jump button (Bionic Commando). Outside of the obvious genre qualifiers, designers are free to create whatever takes on a genre that they want.

For the consumer, I can load up 10 different video games and walk away with 10 completely different experiences.  Game developers large and small have complete artistic freedom when they are creating a video game.

At this point, it's time to slightly rain on everybody's parade and talk about why there is a monkey's paw effect to this dream.

When you think about it, "game design" is one very big blanket term to hold all the many disciplines and areas of focus when it comes to making a video game. A great analogy would be the term "Craftsman", as you can have someone who specializes in metal, wood, glass and so on.

The reason why this can be troublesome is due to one fact -- Every genre is a discipline in of itself. Just because you made the best platformer of the year, doesn't mean you can translate that to make a horror game. 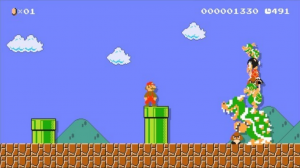 For every different genre, no matter how good you are of a designer, you are going to always start back at zero when working on something brand new.  The skills and understanding of one genre don't always translate over to another.

We've talked about the risks of going big in earlier posts and vlogs, and one of the biggest temptations is going all in on a genre that you've never worked with before.

Game design is a craft, and there are many specializations that go along with it.

Game Design is not easily explained, and to this day it's not something that gets discussed daily. I've been honored by the chance to talk to developers through my live and recorded podcasts on Game-Wisdom.

The most common praise I hear is that it was great to talk to someone about what it means to create games. I hope that we can have more talks and that the art of game design becomes better known.