Net revenue, income, and bookings are all up year over year Rockstar-parent Take-Two Interactive as the company closes out a fiscal year once again dominated by in-game spending.
Alissa McAloon
Editor-in-Chief
May 18, 2021

Net revenue, income, and bookings are all up year over year Rockstar-parent Take-Two Interactive as the company closes out a fiscal year once again dominated by in-game spending.

Take-Two reports $3.37 billion in net revenue for the year ending March 31, 2021, a 9 percent increase from the $3.1 billion reported the year before.

(Both net revenue and net income throughout are reported according to the GAAP accounting standard.)

"Throughout the year, we enhanced our organization for the long term by broadening our portfolio of offerings, capitalizing on diverse business models, enhancing our infrastructure, and most importantly, investing in our creative talent,” reads a statement from Take-Two CEO Strauss Zelnick.

Zelnick also notes that fiscal 2021 marks a new net bookings record for the company, with $3.6 billion in net bookings reported for the full year. Net bookings, or revenue minus the deferred income associated with some game content purchases, increased 19 percent from last year's $2.99 billion. Just over $3 billion of that was digitally derived, up from $2.4 billion in fiscal 2020.

“In fiscal 2022, we plan to deliver an exciting array of offerings, including four immersive core releases, of which two will be from new franchises," continues Zelnick. "In addition, we expect fiscal 2022 to be our second consecutive year of net bookings in excess of $3 billion."

"With the strongest pipeline in our company’s history, including many new releases planned for fiscal 2023 and fiscal 2024, we will be making significant investments this year to enhance our enterprise in key areas such as creative talent, IT, and other infrastructure."

That pipeline so far includes 21 titles to be released in the current fiscal year (April 1, 2021 to March 31, 2022), including 10 free-to-play mobile games, one indie, and six "new iterations of previously released titles." Looking into the 2023 and 2024 fiscal years adds another 41 titles to that lineup, including another 10 free-to-play mobile games, seven new sports sims, and five indie games. 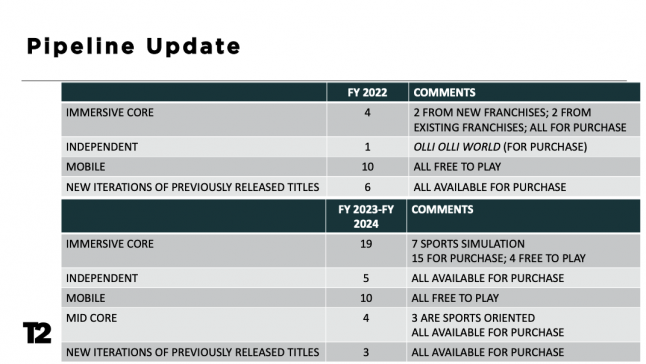