Aside from accidentally stumbling into a Korean brothel, we learned some valuable things about E3 last week
Alex Nichiporchik
Blogger
June 23, 2015

I look over to the bar, and notice two elderly Korean gentlemen that just walked in. The two bartenders are wearing fishnets and talking to them.
One of the waitresses brings over $8 bottled beers our way. Asks us to pay before opening them. The place is really nice. A bit too nice.
There are cameras everywhere. There's a staircase leading upwards. We are the only people in the bar drinking, the waitresses and the gentlemen are staring at us.
Holy shit guys, we are in a Korean brothel in LA's Korea Town. A quick scan of Yelp confirmed this. Finish beers and get the hell out.
This was not the weirdest part of our stay in Korea Town. Here's a picture of what is up there in the top5: 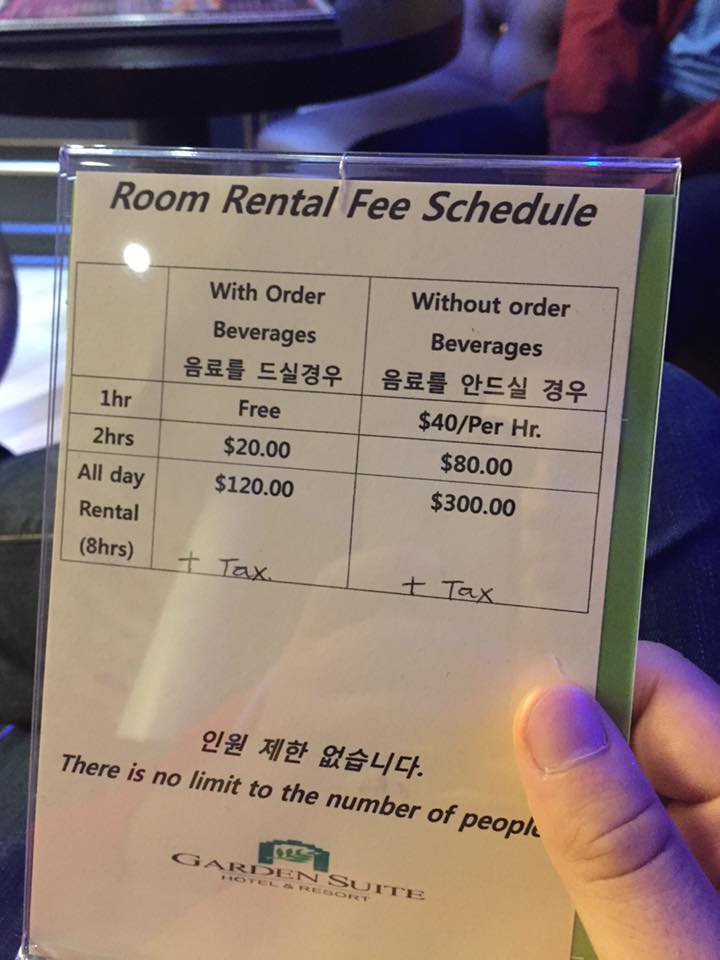 This year was the first time we came to E3. Mike has done it before as a journalist, but the rest of the team's experience was mostly GDC and PAXes. We got really good at exhibiting at conventions, grabbing people's attention with blinding orange colors, doing competitions, tournaments, and giveaways. 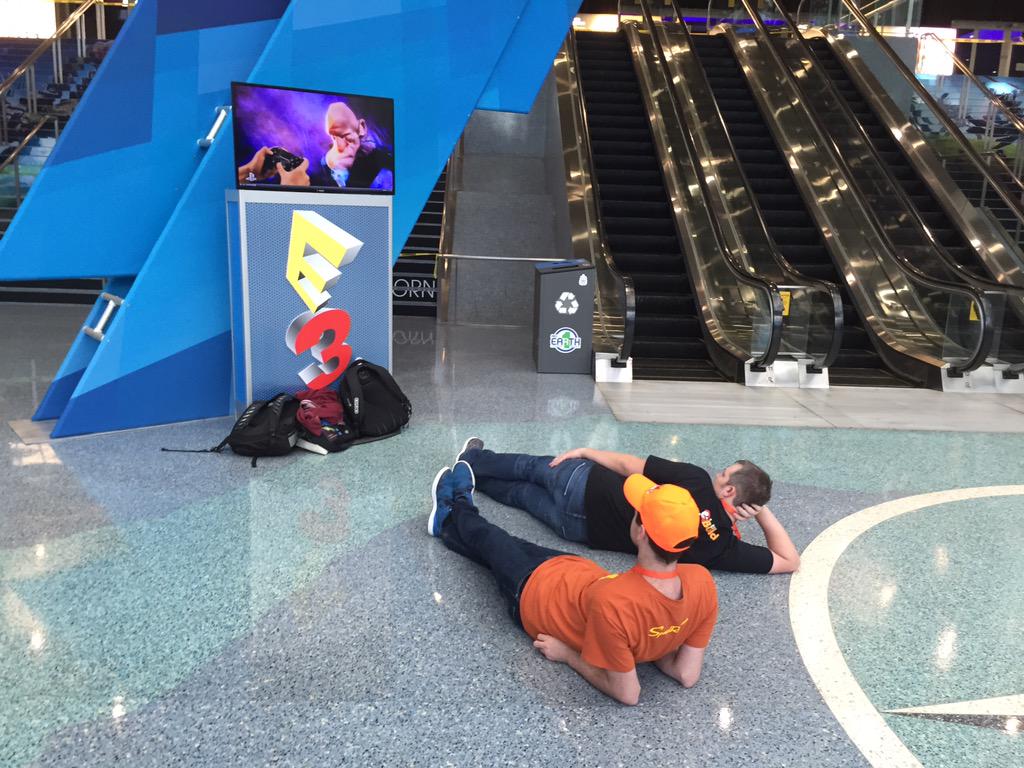 We didn't really know what to expect of E3 though. Our good friends at Evolve PR recommended to rent out a meeting room and just have loads of press meetings there. That was the initial plan. 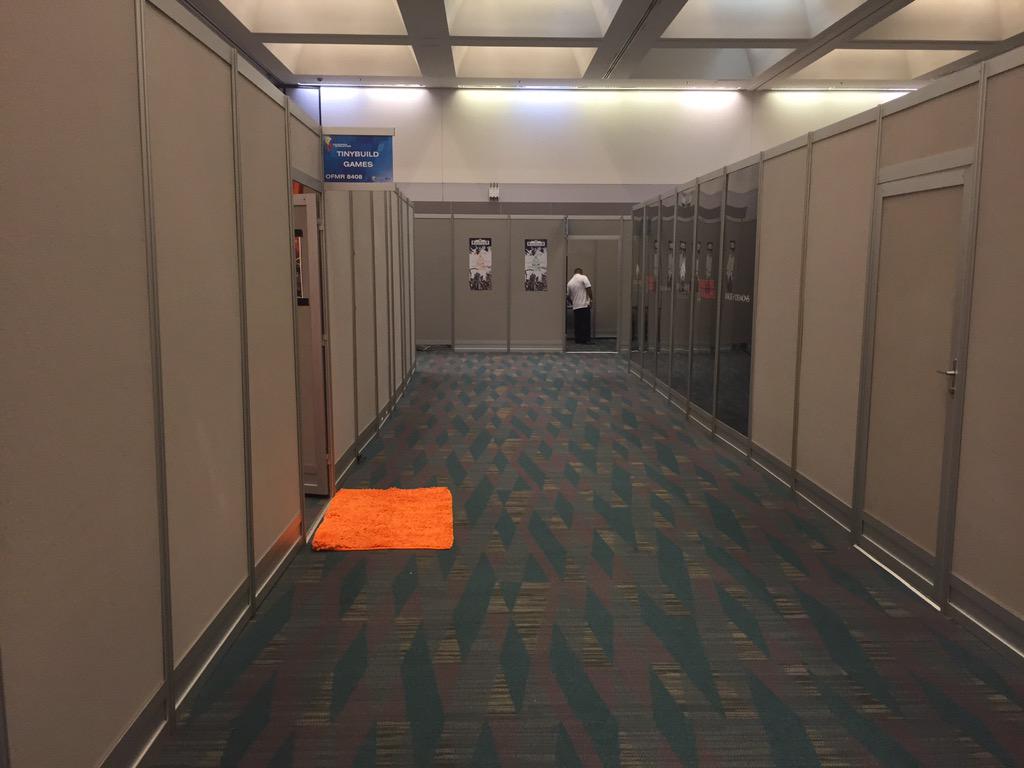 Very fast, leading up to E3, things started to spiral out of control. Typical tinyBuild style.

Lesson #1 - everyone cares about unannounced stuff

As soon as we revealed that we'll be announcing two new games at E3, everyone got excited. Our meeting system exploded and we quickly ran out of meeting slots. 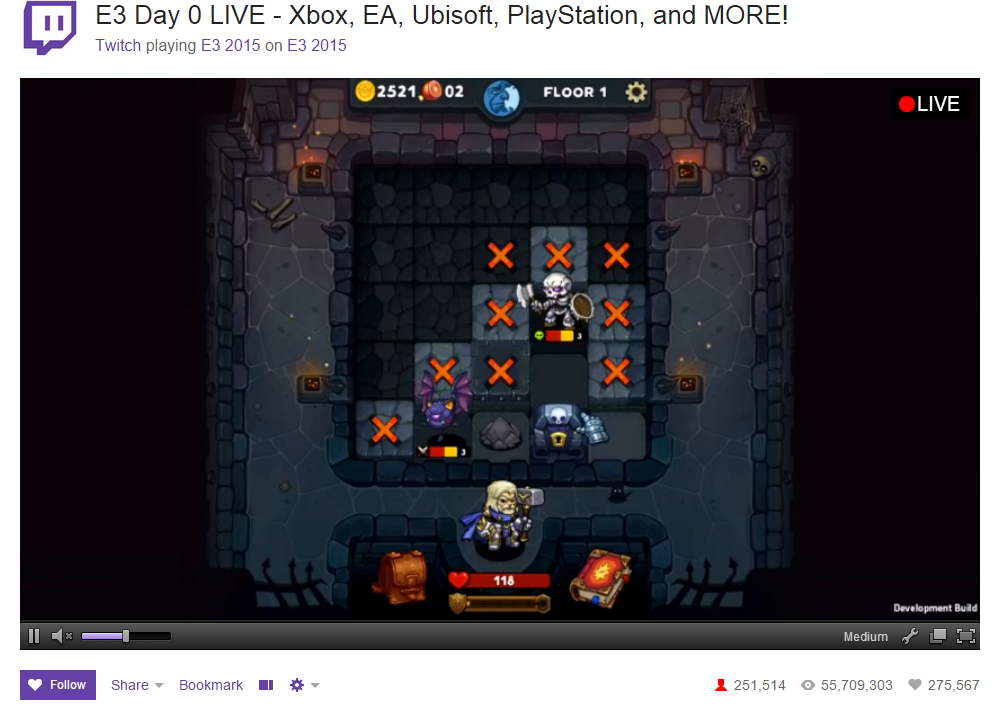 Our first game got announced on the Day 0 main twitch show. It's called Dungelot Shattered Lands, and is something completely different from everything shown that day. Our twitch slot was directly after the E3 Microsoft Press Conference, and over 250k viewers watched us present a mobile-first game. 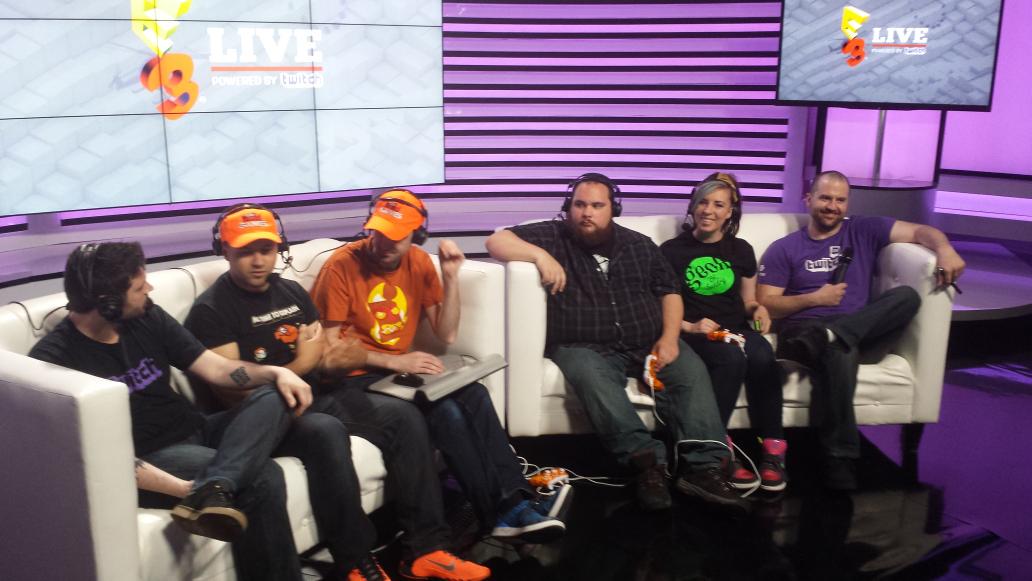 Reactions were mixed, as some people were expecting AAA-console looking things, or retro-throwback games. Instead, they got Dungelot - the game I've been addicted to for a month now. It's a baby of Minesweeper and a Dungeon Crawler.
Our second announcement game, Punch Club, received an overall super positive reception from the reveal on Day 3 of E3 Main Twitch Stream.
There were about 50k viewers watching, and I think the universally great reception was because it's a nostalgic game, and that the people watching that day expect to find weird stuff.

Lesson #2 - Los Angeles doesn't have anything orange, and getting around is difficult

If you followed my previous posts, my favorite part of any event is driving around Home Depot's, Wallmarts, Costco's, and all those stores -- searching for anything in abusive orange color. Something we can use in our booth/room. 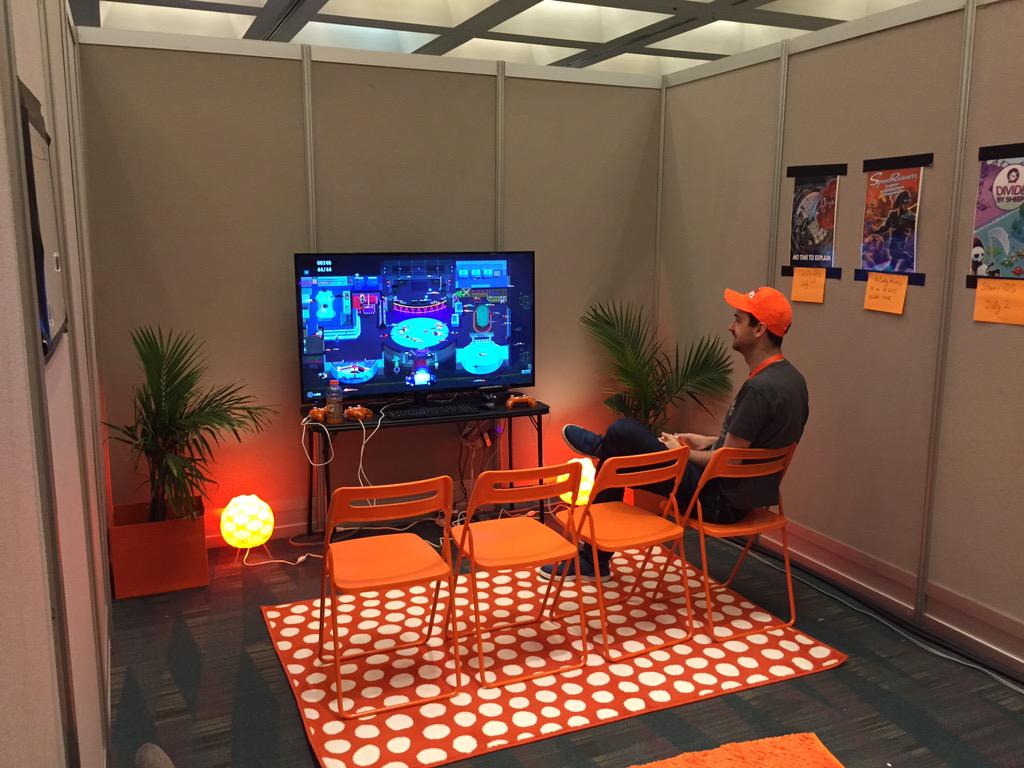 We spent two full days driving around LA traffic finding stuff, and this was the end result of the room.
If you plan on visiting multiple places during one night, for networking events or whatnot, plan ahead. Check if the venues are nearby. If they're not, you might end up stuck in traffic for a while. Fortunately Uber works great and is cheap there.

Lesson #3 - it's very difficult to standout without platform deals

Unless your indie game is confirmed and is getting promotion from a platform (Sony or Microsoft), you probably won't get much traction. 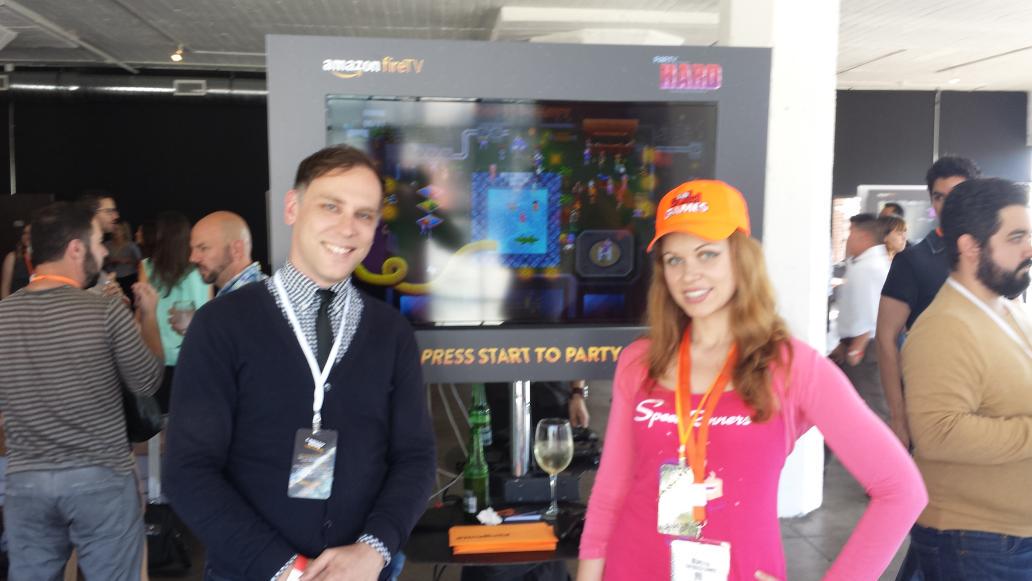 Showcasing Party Hard at the Amazon Fire TV Party
The games featured in platform showcases got tons of attention. If you were in the Sony or Microsoft booth, it was super easy to get featured on big websites. If you don't have that, E3 is probably not worth it if you're going to just get coverage for your games.

Lesson #4 - everyone is there, go do meetings that help spark long term relationships

During E3 we have solidified several important deals, which we'll be announcing soon. I had this perception that we should just go there for the press -- and we got some coverage for our games coming out of it -- but I believe the main value is from doing partnerships.
We've been growing our partnerships left and right with Yulia aggressively pushing deals with comic cons and near-gaming conventions. SpeedRunners is now getting featured at a dozen events before end of year.
Our No Time To Explain launch plan was put together right there.

When you think of E3, it feels like this large pissing contest between large publishers. It is. But everyone who says the show is really huge is wrong. Go to Gamescom and then complain about E3 being too big. It's pretty compact, getting around is easy, there aren't that many lines. It is an industry event to a certain degree (still lots of consumers), and it does have plenty of showfloor space.
If you go to the edge of the halls, you see loads of unsold space being used for different purposes. IndieCade had a huge spot, and right next to it was something completely irrelevant. There were lounge spots everywhere. For next year, if we don't get a console partnership spot, I think we will just rent out some showfloor space and throw tournaments to get a crowd. 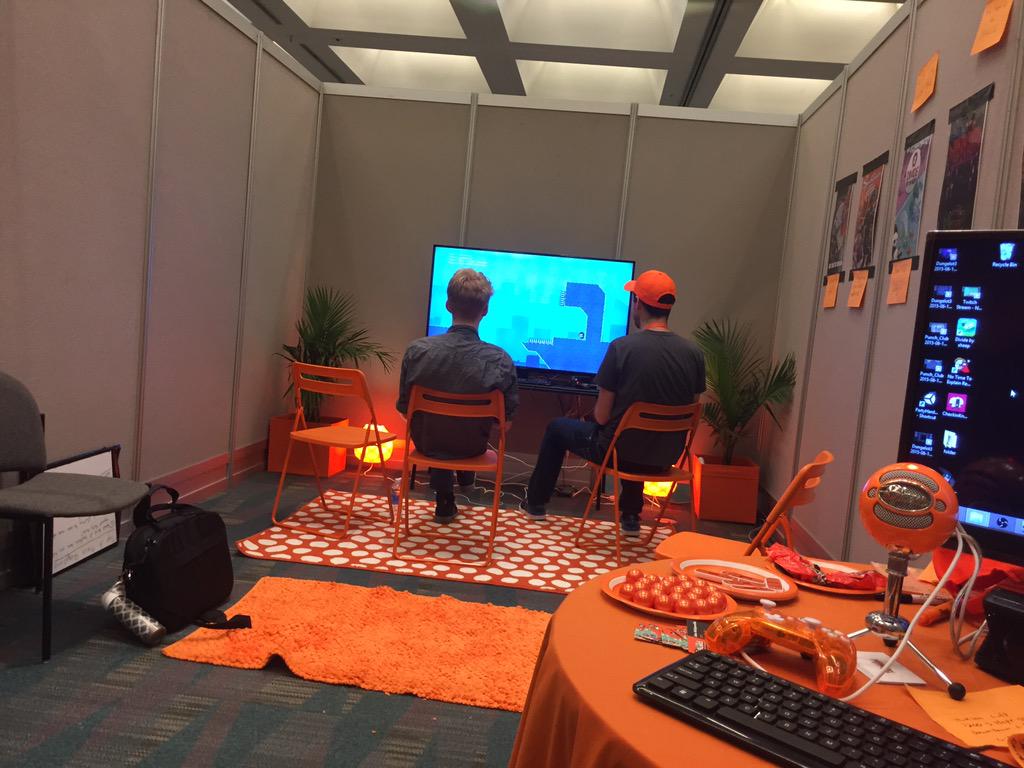 tl;dr was it worth it with just a meeting room? YES! Maybe not for the instant press coverage, but because of the relationships and partnerships we can form at E3. And we got to push mobile games against ridiculous odds.