What can game developers expect out of Project Scorpio, Microsoft's upcoming Xbox revamp?

That's something we tried to shed some light on last week with our technical breakdown of Scorpio and its dev kit, which was heavily informed by meetings we had with Microsoft staffers at the company's headquarters earlier this year.

One of those interviews was with Xbox chief Phil Spencer, and we published it in full because it offers devs useful perspective on the future of Xbox -- everything from where Spencer stands on VR exclusivity (not a fan) to the future of Xbox hardware.

But there were other conversations we had that might also be of interest to game makers, especially the briefings we took with devs from Microsoft's first-party developers Turn 10 Studios (the house of all things Forza) and The Coalition (Gears of War 4.)

As you might expect, these conversations were very positive when it came time to talk about the nuts and bolts of making games for Scorpio -- both studios are owned by Microsoft and were directly involved in the hardware's design. But they're also staffed with people who make games for a living, and who seem to take their work as a vanguard for Scorpio development seriously.

"A major piece of us being first-party is to prove the platform for other developers," Turn 10 studio software architect Chris Tector told Gamasutra. "We really hold that dear to what we're supposed to do. It's our responsibility as a first-party studio. To help ensure the platform is ready for everybody."

For Tector, one of the biggest challenges of getting ready for Scorpio, which takes 4K resolution as one of its chief selling points, was actually tackled when Turn 10 started developing for PC -- and adjusted its production pipeline accordingly.

"Around Forza 6, we knew that in the future we were going to have to move to Direct3D 12. Not just help the platform prove it out as a feature, but we wanted to move to it, because we knew we were gonna move into PC gaming," said Tector. "The only way we were gonna get the level of submission efficency that we have on console is to move to this new Direct3D model; 11 wasn't really gonna cut it for us."

"So we had those two big moves coming, PC development and Direct3D 12. and we wanted to start bringing them in in pieces. So that's why we developed Forza Motorsport 6 Apex. Which was a slice of 6, but it was the first time that PC players got to play it," he continued. "So we got to start dealing with all of the wheels that were there for scaling across different PC specs. Or dealing directly with the IHVs [integrated hardware vendors] like AMD and Nvidia. So that really forced us to build up these muscles around C development. And that included things like kinda revamping our authoring process so that we now were capable of creating and building and packaging 4K assets, and delivering them in the way that we wanted to, so we could still deliver car packs like we've always done." 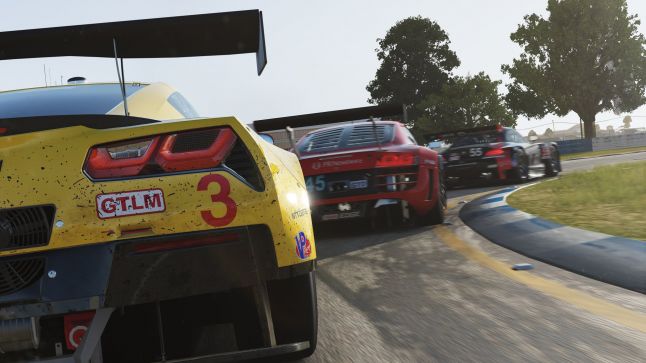 This matches up with much of what Mike Raynor, technical director at The Coalition, told Gamasutra about what it's like developing for Scorpio: the addition of a beefier console to the "Xbox One family of devices" requires devs to think like PC game makers, and build games that can scale across hardware configurations of significantly different power.

"Invest in making sure your engine is scalable," said Raynor. "So that you can take advantage of these different performance profiles. And author your content at a native art resolution that allows you to scale and take advantage of that. So for us, we authored all of our content at 4K from the get-go, knowing that we weren't going to use all of that on necessarily all devices, right. Certainly not on our PC min-spec."

Before he joined The Coalition Raynor spent time working at Electronic Arts on games for both the Xbox 360 and the original Xbox; based on that experience, he tells Gamasutra that Scorpio is an improvement on the Xbox One from a developer's perspective.

"When I first started working with Xbox One, I was a little bit disappointed; it kind of felt like we'd really taken a step back. And I've seen that evolve, and improve constantly since we've launched, but with what we're doing with Scorpio, it's now very pleasurable to work with," said Raynor. "From a developer standpoint, when you think about Xbox One, Xbox One S (with HDR) and now with Scorpio, a lot of development for us is similar to PC. And we kind of think of PC as kind of the ultimate platform, in terms of scalability and all the different targets that we have."

So if a studio is already accustomed to multi-platform development and has a system in place to produce games that can scale across different PC hardware configurations, both Raynor and Tector believe targeting Scorpio should be relatively straightforward.

As an example of how straightforward it might be for an established multi-platform studio to add Scorpio to its pipeline, Tector told the story of how Turn 10 got in a Scorpio dev kit back in mid-January, when Microsoft wanted to see what was involved with getting Forza up and running on the hardware.

"So Matt Lee, from the Direct3D team on Xbox, he shows up with a cardboard box full of parts," recalls Tector. "It's like, a loose motherboard, the debugging adapters, the drives. And he sets it up on the desk. And it's just like, there's no proper cooling on it, so we just have a fan sitting there. And it's blowing across it, and it vibrates, and the fan starts moving and the whole thing shuts down because the memory overheats and...it was comedy. So we taped the fan to the desk and we kept going and within 2 days, we were already running at 4K [resolution] 60 [frames per second]."

Tector went on to say that two-day process of porting to Scorpio only required one person, who wound up sat alone in a room with the jury-rigged dev kit.

"We had set up this whole locked room. You know, secret hardware, gotta keep him sequestered while he's working on it for the weeks and weeks it'll take," said Tector. "And after two days he [Matt Lee] was like, 'Well I'm gonna go, you guys can play around with it for a bit. I'll come back in a day.' And this was like this huge sigh of relief for us."

But while Tector was mostly  about his company's upcoming console, he also expressed some regret for the Scorpio console not quite getting to where Turn 10 specifically would like it to be in terms of hardware.

"We didn't get to the right place with audio hardware. On all of Xbox One. And we were hoping that would improve," said Tector. "Because that would really open up some CPU headroom for us. I don't know if I'm calling out something I'm not supposed to! But we do a lot of heavier-weight audio than some other games do, and it means we do a lot of real-time mixing of that. Because the way we generate an engine is more of a simulation based on a whole lot of loops. But it means that we're modeling the different subcomponents within the car. So not just the engine, it's actually transmission and an inner cooler and blah blah blah, all these little bits on the engine that we're building up, and then that's a final mix on one car. And then we've gotta go do it on the next one."

"So it's pretty heavyweight, and we have some heavy requirements around that," Tector concluded. "But we'll get there someday."