As a whole, Square Enix reported a year-over-year increase in sales and operating income but numbers for its HD Games business alone shows that Avengers sales have failed to balance out costs.
Alissa McAloon
Editor-in-Chief
November 06, 2020

As a whole, Square Enix reported a year-over-year increase in sales and operating income half way through the fiscal year but numbers for its HD Games business alone paints a troubling portrait of its September launch, Marvel's Avengers.

Digital Entertainment is further broken down into MMO and HD Game categories, and that's where the seeming impact from Marvel's Avengers reveals itself. The MMO segment on its own looks to be going strong: it saw a slight decline in sales year-over-year due to competition from last year's major Final Fantasy XIV expansion launch, though operating income is up year-over-year due to strong subscriber numbers in FFXIV.

For HD Games, sales are up year-over-year, but seemingly not by enough to balance out development costs as operating income dipped into the negatives during Q2 as shown in the chart below. 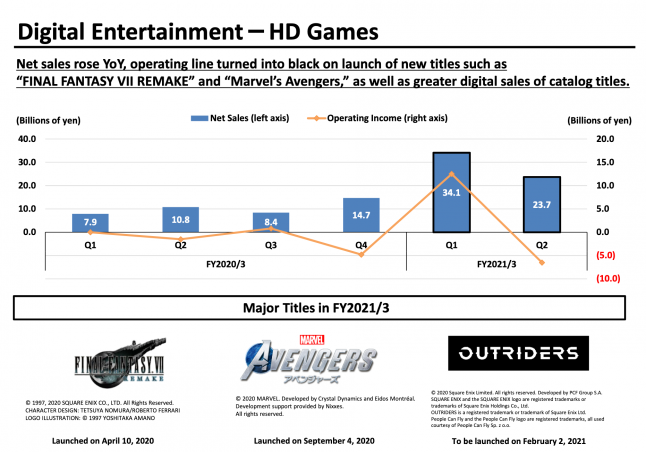