YouTube's automated Content ID copyright protection system is set to receive an overhaul that will permit YouTubers to (potentially) earn ad revenue on videos that are subjected to Content ID disputes.

This is important for the game industry at large becauseit's now commonplace for both game developers and players to maintain YouTube channels where they upload game-related videos and (potentially) earn a bit of money from ads shown on those videos.

The new Content ID system, which YouTube hopes to roll out "to all YouTube partners in the coming months," will see videos continuing to display ads, even if they're embroiled in a Content ID dispute. The revenue from those ads will be held in a separate account, and distributed to the owner of the video once the Content ID dispute is resolved.

Under the current Content ID system, if any portion of a video uploaded to YouTube is detected (via algorithm) to match an example of a copyrighted work that a company (like Nintendo) has uploaded to the Content ID system, the offending video will be flagged as violating Content ID and will cease earning revenue for its creator(s) until the claim is disputed and resolved.

That's been a source of significant contention in the past few years, as thousands of game videos were flagged as Content ID violations by companies like Nintendo (who went on to launch its own YouTuber affiliate program.)

It should also be noted that YouTube's Content ID claims are commonly confused with, but different from, DMCA (Digital Millennium Copyright Act) takedowns. Video game attorney Mona Ibrahim explored the differences between the two in greater nuance in this classic 2013 blog post. 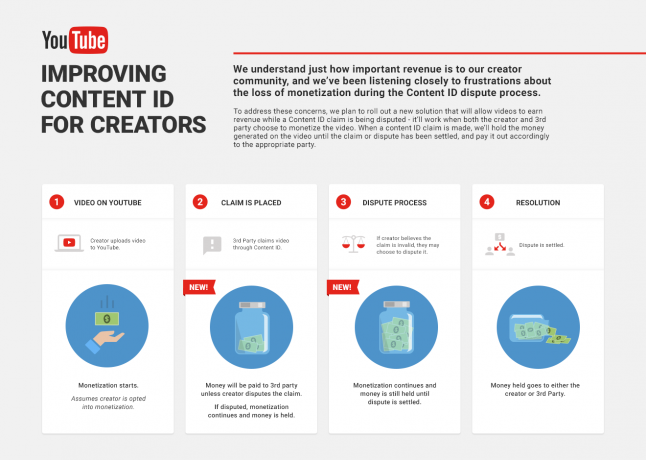