Why we changed the art style in the middle of a Kickstarter campaign.

What happens when you realize that no one likes the visual style of your game, and it's already more than half-way through a Kickstarter campaign?
Kevin Zhang
Blogger
January 24, 2014

Luna’s Wandering Stars is an upcoming planetary physics 2D puzzle game. When we launched the Kickstarter campaign for it, we originally created faces and personalities for the planets of the solar system. Though we originally wanted to explicitly appeal to a younger audience with planet faces, we realized midway through the campaign that the faces simply did not fit the game design and difficulty.

It started when a slew of commenter on Steam Greenlight mentioned their dislike for the faces. When we asked more people outside of Greenlight, we realized that they had the same general consensus, and that many of them were put off by the entire game because of the art direction. After an emergency meeting, we decided to do something crazy: Change the game’s entire art style, and update the Kickstarter video and all images for the duration of the last 2/3rd of the Kickstarter campaign.

Did it pay off? Absolutely. 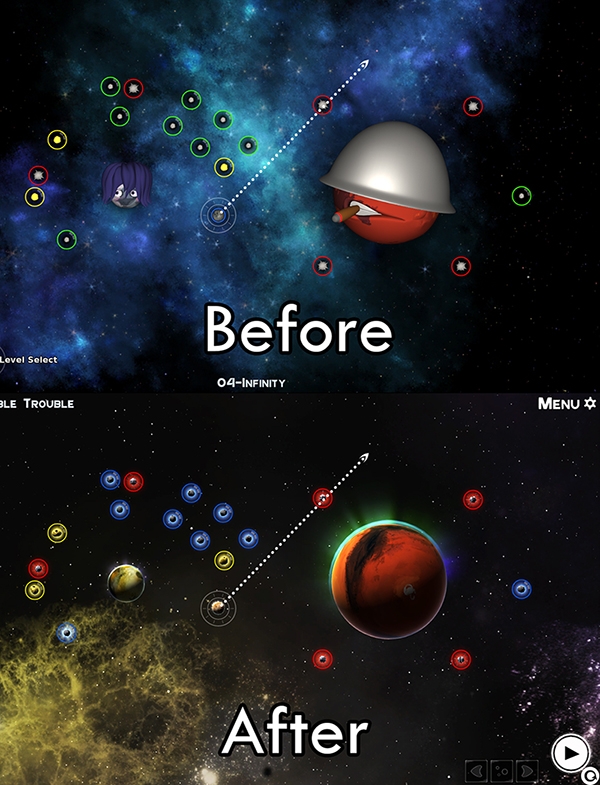 Let’s take a look at the graph of the funding progress. We got a great start to the campaign due to our initial promotional efforts, but when you look at areas “A” and “B”, those two areas took up the majority of the funding period.

“A” was after the initial burst of promotional efforts that resulted in many friends and family donating. A generous donor then donated $1,000 to us, as shown in the middle light-blue area. After that, the rate of donation remained pretty much the same as it was, as shown by area “B”.

And then, we updated the Kickstarter page and video with the new art style (which, by the way, took Takumi McAllister, our programmer, just over a week to fully implement). The resulting change in donations is shown in area "C", but I've included graphs below that better indicates the amazing change in donation rates:

Important things to notice: Not only did the amount of donations go up right after we updated the Kickstarter page with new footage and images, but the number of donors significantly jumped up as well. In addition, our $7 "Early Bird" reward tier, which had a a 100 backer limit, was gobbled up within a few days during period "C". This reward tier was the cheapest tier in which the backer could get a copy of the game.

Not only was this our first Kickstarter project, but it was our first video game as a team. Here's what we learned:

-Without understanding the market that the original art style targeted (children and people who are more interested in "casual" graphics), we thought we could pull it off without thinking about whether it matched the rest of the game.

-In addition, the original art style wasn't executed well enough. People complained that the faces looked creepy, and that it distracted from the actual gameplay.

-Don't be afraid to drastically change important elements of your game in the middle of a Kickstarter campaign, especially if you know that the element has been preventing more interest. Based on the slope of area "C", we could have gotten around $9,000 in pledges if we had the realistic art style from the very beginning. Based on the slopes of "A" and "B", we also could have gotten just under $6,000 if we never changed the art style.

We're currently at the point where we've refining the visuals, balancing out the level designs, and improving all aspects of the game. We've come a long way since our ill-planned planet faces. Luna's Wandering Stars will launch at the end of March this year.

Please help us get on Steam Greenlight, with the new shiny graphics!