When Morning turns to Midnight: an adventure in name-changing

Naming a game is often tricky. And it’s always emotionally charged. It’s like naming a child. And when you have to change the name, it's even trickier.
Tim Harris
Blogger
October 23, 2013

Naming a game is often tricky. And it’s always emotionally charged. It’s like naming a child. However, unlike naming a child where you can avoid telling anyone the name until after the baby is born (so everyone has to say they like it), a game requires you to tell everyone the name in advance to gain interest and recognition of that name so you can try and create demand. Also, if the name sucks, people can tell you right away.

At Industrial Toys, we’ve been working for over a year on a title that has been fortunate to receive a lot of attention, excitement and scrutiny. It’s also been a bit unfortunate-- we learned that its name is already spoken for.

We became aware of a trademark application for the name “Morning Star," and it was in prior to ours. That means we had three options-- find a way to “coexist” (agree to avoid confusion about the name and stay out of each other’s way), create an agreement that would transfer the trademark to us or… change the name of the game we’d already announced. After the first option was ruled out, we started exploring the ramifications of two and three.  Did we want to spend money to acquire the trademark—money that’s super precious given we’re a start-up making our first title—or upset the momentum we had behind a name with awareness and a following (not to mention a history, strong social channels and a heckuva Google footprint despite the existence of a major financial website and delicious garden burgers of the same name)?

In the end, we chose Door Number Three, but it wasn’t just about the caysh. It was about the creative challenge. When we sat down and contemplated what to do, the solutions we started to talk about weren’t just “acceptable,” they started getting us excited. There were three solutions that led to more:

Our UI and graphic designer, Sarah, is a stickler for brand, look-and-feel and style—all the things you want from someone when creating the identity for a project. She spent a ton of time developing the game’s logo, and yet we realized that we almost never use the words “Morning Star” with it. 99% of the time, we display the mark by itself, because of its vertical design and because-- well-- we like it. We were more attached to the logo than we were to the game's original name, so we started throwing out alternatives that could preserve the mark. “M Star?” Nah, that’s a Korean dance game. “Mourning Star?” Too close, won’t avoid the confusion. “Morticant Star?” C’mon… 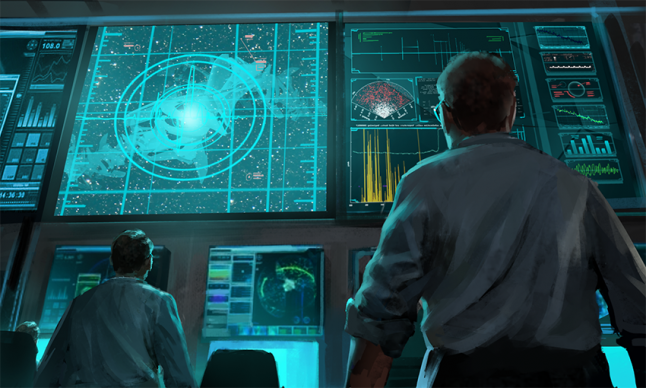 Our fiction is based on an Earth 120 years from now, where several governments of the world have agreed upon a secret set of protocols that dictate how we’ll collectively respond to an intelligent signal from outer space. This “Morning Star Protocol,” from which we got the original name has all sorts of ins and outs, not all of which we had defined. What we had created were some ideas around what to call the signal if it was in our solar system, outside our solar system, friendly, hostile, etc. It was from this pool of ideas that the name change was born.

Under the Morning Star protocol, an alien signal is referred to as a “Morning Star” signal if first contact turns out to be friendly. If it’s hostile, it’s a "Midnight Star" signal. Guess which one it turns out to be in our game? It's not quite that simple, but... 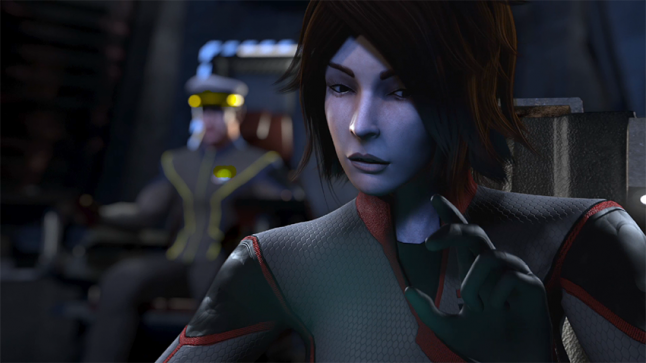 We’re getting closer and closer to the release of the game, so we’ve started work on the launch trailer with our friends over at Zoic Studios (who also made our kickass announcement trailer). We’ve been going back and forth about it, and we centered on a line that our main character, Charlie Campbell, delivers during a key moment in the game:

Not only does this line tease a key plot point in the game, it also (basically) sums up the name change. And it stuck out to us as we thought about the trailer, because of the naming situation. It served as the final “ding!” and sparked discussion about the trailer's key points, aside from the "pew pew pew it’s a shooter yay!” As the trailer comes together, Charlie's line has ended up becoming its cornerstone and after an audio static and effects overlay were placed on it, it's gravity comes through on multiple levels. Without going too deeply into spoiler territory, the Earth gets a message from a guy who isn't born yet, warning them about "Midnight."

And thus, "Morning turns to Midnight." The name of the game is Midnight Star. We revealed the name change to IGN in a recent preview, and changed all of our URLs, backend services, social media outlets, video titles, and anything else we could think of to reflect the new identity. This includes the John Scalzi-written graphic novel application that we're going to launch alongside the game (now named Midnight Rises).

The number of titles players see every year continues to grow, and with that comes stories like ours. It's not easy to come up with a name that you love. And it's harder to come up with two. But when faced with an obstacle that's beyond your control, it just might open you up to interesting creative choices you wouldn't have considered otherwise.