This article was first posted on Kitfoxgames.com as part of an analysis of Moon Hunters, our most recently released game. 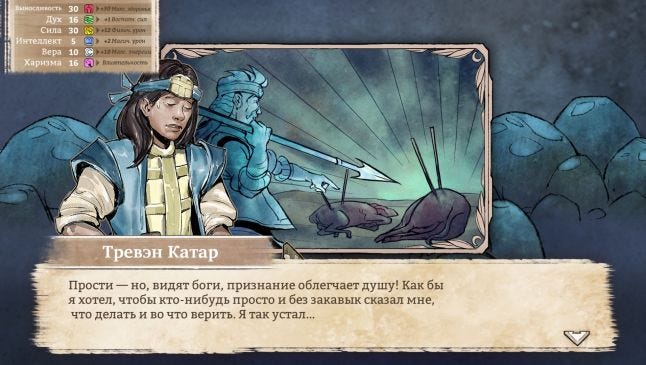 I gathered data from 18 different indie games (with their permission, and I even got permission to show you the aggregated data afterwards), and compared their sales in Russia and Eastern Europe along several axes.

The data set included games from various genres, with varying levels of financial success, and generally no marketing efforts spent on the region.

The data isn’t extensive enough to look for statistical significance, but there are a few interesting trends.

All right, let’s actually look at the data.

Generally, you should expect ~3% of your sales to come from Russia, and less than 2% to come from Eastern Europe. However, there’s the potential for a lot more. 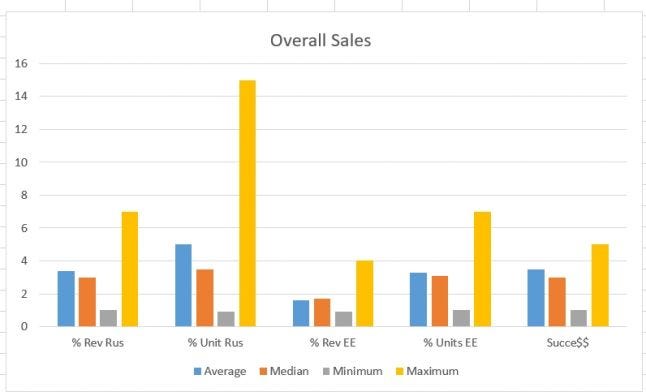 % Rev vs % Units: In general, everyone's percentage of units sold in both regions was much higher than the percentage of revenue from the region, especially in Eastern Europe. This means that the copies were purchased at a relatively high discount compared to other regions. Only 3 of the 18 games had % Rev higher than % Units in Russia (and 0 saw this in Eastern Europe).

“Success”: Note the scale of that final category isn’t quite the same as the others — “Success” (again, self-reported, and simply “how well did/will this game make back its money”) had a minimum of 1 and maximum of 5, while the others are a percentage, therefore a minimum 0 and theoretical maximum of 100. But in general, it looks like the respondents in this group made back their money (average of ~3.4).. that alone indicates we probably do have a skew. Anyway, moving ahead.

What Year Did Your Game Release?

I wondered if Russia was growing or shrinking over time. There doesn’t seem to be a huge difference, except that maybe Russia has become more interested in Steam since 2014… but if so, the rest of Eastern Europe hasn’t followed.

One game was excluded, because it was still in Early Access. 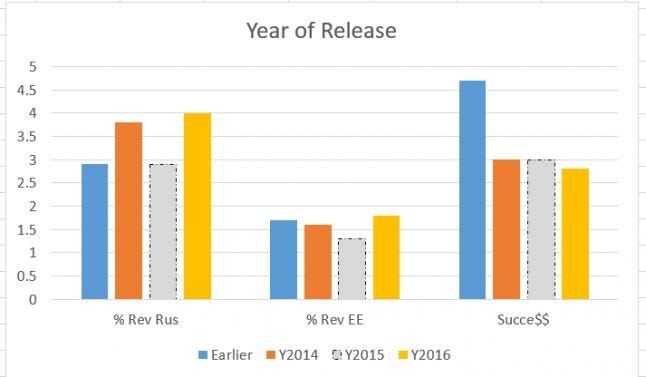 It’s also interesting how high 2016 is, given that we’re only halfway through. That implies that the first half of 2016 has resulted in the same percentage of revenue (and same estimated success) as games that were already out for all of 2015. Proponents of the indiepocalypse theory will point how how high “pre-2014” success was, but I would counter that it’s possible this just reflects the long tail, or that whatever explosion we feared happened 2+ years ago.

Did You Localize Your Game for the Region? 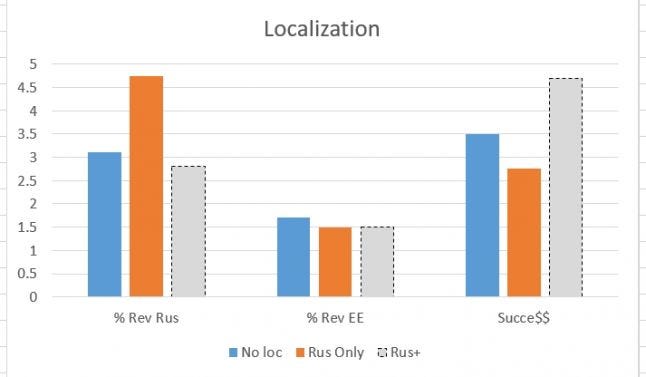 Only 3 games localized past Russian, presumably because they were already successful and it made sense to invest in the game further.

One game’s Russian translation arrived 2 years later than the others, while one of the “Russian+” games was entirely localized by unpaid volunteers.

What Steam Tags Does Your Game Have? 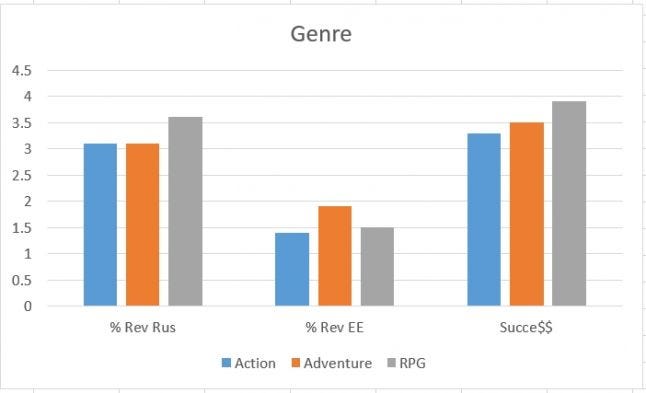 Keep in mind 1 game could have any or all of these tags. In the dataset, there were 10 Action, 6 Adventure, 7 RPG, and then a handful of others (Strategy, Casual, Tower Defense, Roguelike, Roguelite, Platformer, etc). I had some sort of hunch that more ‘hardcore’/challenging/complex game genres would do better in the region, but then again, it’s difficult for Steam tags to encapsulate how hardcore something is, and we only had 1 Casual entry to compare against. Perhaps in retrospect I should have asked participants to rate how ‘hardcore’ they felt their game was.

Someone also noted that their game included a free competitive tactical demo, which had 14% Russian units downloaded and 3% EE units, even without translation. So that seems like an interesting outlier… either in genre, price, or some other element. Speaking of price...

What Did You Charge?

We only had a small number of games submitted with prices that weren't $9.99 or $14.99, but it seemed pretty clear that the lower price games performed slightly better proportionally in Russia and Eastern Europe. I even tried controlling for age (removing games before 2013) to account for potential high discounts, but the graph looked very similar. 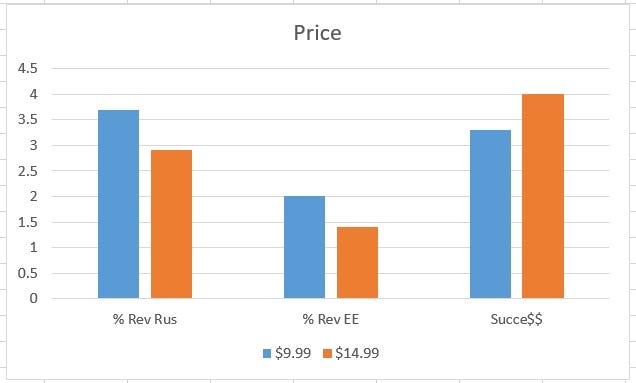 It's worth noting here that higher-priced games were also rated an average of 5 points higher in their Steam User Reviews.

Did You Specifically Target The Region With Marketing? 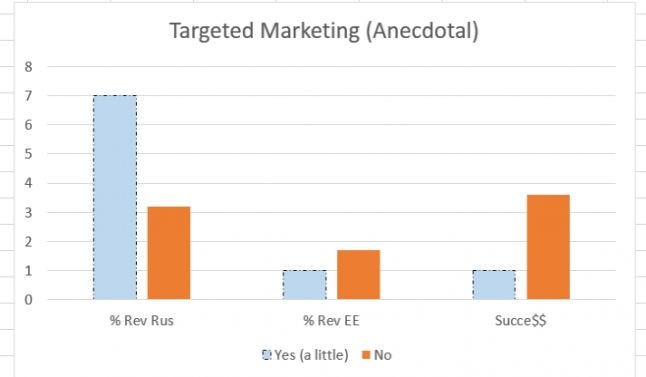 The “Yes” column only reflects ONE entry out of 18, and that particular entry was a low sales performer overall, so it’s very hard to read this as anything but an anecdote. Even so, it’s interesting that it would have double the revenue percentage of the other 17. In fact, it was the highest in that category across all games. There was only one other game with 6% Russian revenue, and 4 with 5%.

It seems that Early Access does well in the Russian and Eastern European markets. Or maybe the more recent the game, the more likely they’re Early Access, and simultaneously the more Russians are on Steam. 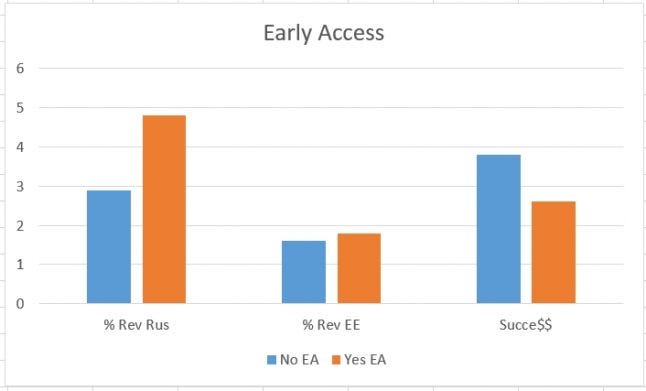 What’s not reflected here is that the Steam User Reviews were on average 5 points higher when a game was in Early Access (83.8 vs 77.9). There was only one more notable user review gap, coming up next…

Has Your Game Been Released On Other Platforms?

We don’t know which platform the game released on first… I’m not sure if this shows that (in Russia) mobile games do well on Steam or that Steam games do well on mobile. Also, there were two games that had browser versions and one with a SteamOS version, which I decided not to crowd the graph with. 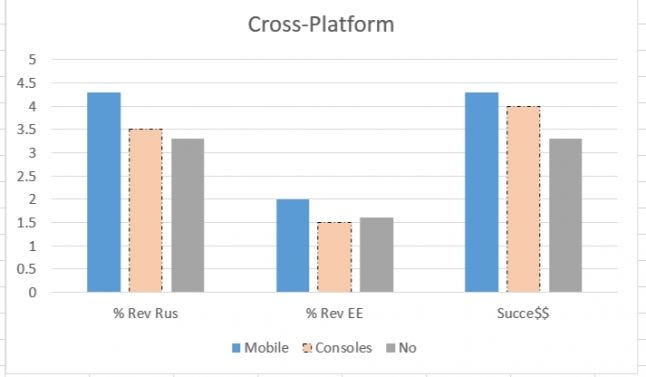 However, it made me curious, so I decided to use this opportunity to do a cross-analysis of mobile vs others, and found that although their user reviews were on average a full 8 points lower (72.5 vs 80), their reported financial success was a full grade higher. There were only 4 mobile entries, so take that as you will, but it’s interesting. The mobile-cross-platform games also came out roughly a year earlier (2013 vs 2014).

How Did Steam Users Rate Your Game?

So is it a case of popularity begetting popularity? Some might wonder if a globally popular game will be especially popular in Russia or not. 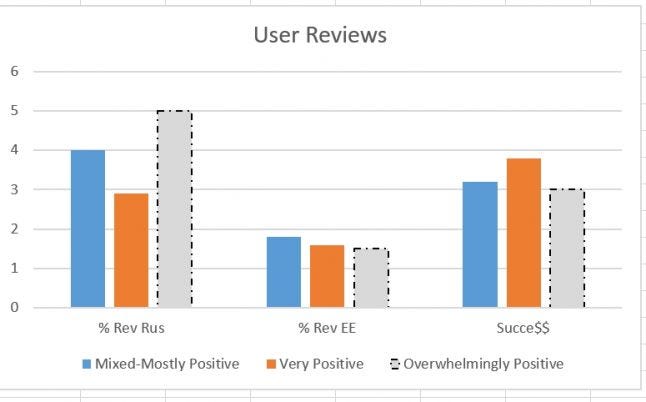 Overall popularity (as measured by Steam User Reviews) doesn’t seem clearly correlated with regional or financial success here, though there were only 2 Overwhelmingly Popular entries.

In retrospect the survey should probably have asked questions about pricing (not just base US price, but localized Eastern European pricing) and discounts (lowest price-point, etc).

I also have deliberately chosen not to look to Steam Spy for sales data to compare the titles (yet anyway), as that would turn the data more towards units than revenue.

To me, this all says that if you were feeling shy about bringing your mobile game to Steam, consider doing it with some Russian localization. It seems like it could be a surprisingly good investment. Other than that, I’d be curious to see what happens if more indies tried spending a little more money on targeted marketing in Russia.

Thanks for reading! If you have any suggestions, please feel free to tweet at me anytime.