We have been GREENLIT! Here are our stats, thoughts and tips.

Industry veterans warned us that Greenlight is a damaged system, that our chances are thin and that many games are left in the limbo. Instead of taking the easy way out (dealing with publishers) we decided to get on this ride. And hell was it worth it!
Artur Hilger
Blogger
February 17, 2014

Hi everyone!
I'm Artur Hilger from Fir&Flams (indie game dev duo from Poland) and our first game - CATDAMMIT! Director's Cat was greenlit recently! On February 5th, after participating in Steam Greenlight for 54 days this awesome moment has finally come! And following recent trends, we wanted to share our statistics as well as our thoughts on the whole process, the pros and cons of being there. Those, who are still to post their first game on Steam Greenlight should find some useful tips here.

Steam means recognition. Steam means prestige. Steam means you're not a "no name" anymore. And finally - Steam means sales. Indie game deveoper's promised land, indeed. Perhaps getting there might solve all your problems, but getting there is just another problem itself. At least for most independent developers, even with great games.

After clicking the "Publish" button the 'Lifetime stats' window will become your best buddy. It can tell you how well you are progressing, compare your stats to the current top games and also - it can help you recognize the best means to advertise your campaign. A little graph on the right shows your progress compared to the games in the current TOP50. During our time, there were some ocassional superstars reaching #1 in less than 10 days - fortunately there were not too many of these FPS games :) Some titles there might seem flatlined and show way worse progress than your game (at the exact point in their glory days), but they could have been drifting in limbo for such a long time, so that their cummulative "yes" votes actually does matter. 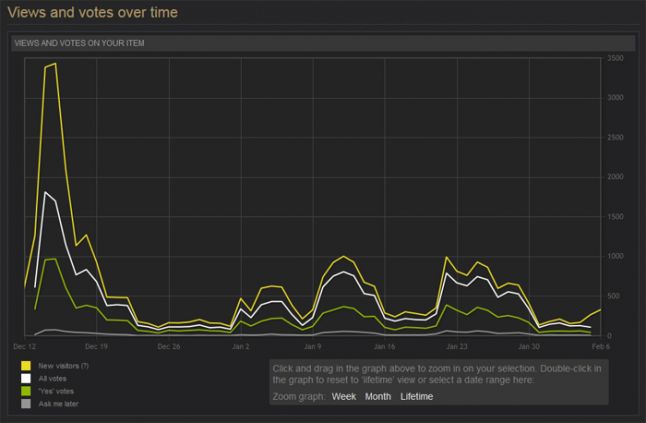 Day by day on Greenlight.

One quick look at our graph reminds me of an average milkoholic's biorythm. The first 2-3 days usually brings the highest peak in traffic. But it is to be expected - yo've got a brand new game highligted on the front page. Some developers start to brag, feeling like rockstars, unaware of the following depression. We were also very excited at first but lost a little hope during the next few days. Why such a big slope in the charts? Initially we blamed it on Christmas and the New Year's Eve but after analyzing fellow developers' Greenlight reports - we saw a definitive tendency there. The good news is that we bounced back after a while... just to experience another downfall few days later :) While drifting between these ups & downs, we have noticed that greenlight batches caused this quite regular influx of new visitors and votes. So plan your campaign and avoid holidays!

I have to admit that the thing I was worried about the most were the comments. I've heared from friends that trolls are merciless there and that we insolently exposed ourselves by submitting a 'not your average Steam title'. Basically, the message reads: "If you're not a multiplayer FPS, bend over and loosen your butt-cheeks". To my suprprise, the comments were awesome and motivating! The most offensive one I can remember declared that the game "looked boring"! Hi-five to the community!

What works and what doesn't? Great assets work, hard work works and primadonnas doesn't work at all. But seriously - press coverage doesn't necessarily transate to upvotes and - from what I've heared - neither does the "let's play" videos. The latter doesn't come from our personal experience - we have been greenlit before we had a chance to work with vloggers on Director's Cat. There were some cool articles in the press (thanks guys!) but, unfortunately, they didn't generate much votes. That's when you realize how many readers are still shopping at Pirate Bay and have their Steam accounts hacked :) 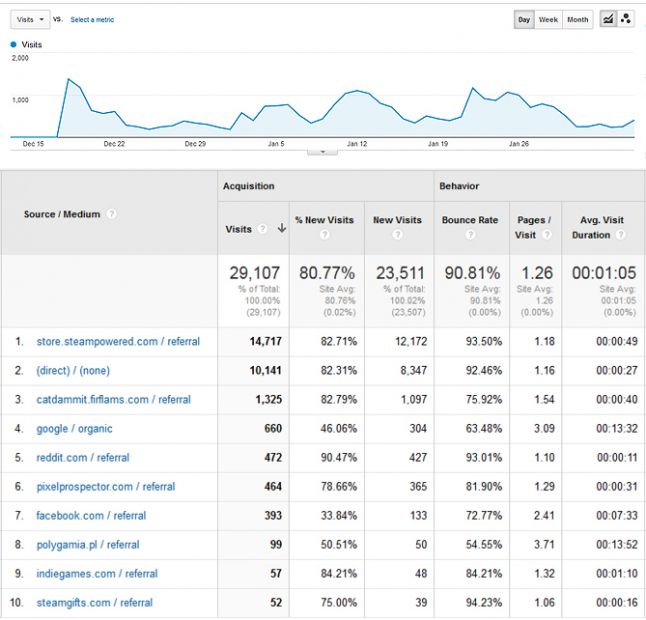 Our Google Analytics data (don't forget to merge GA with your greenlight profile) shows that most of the traffic came from the Steam community itself. Which is a very good sign! It means that potential customers liked what they saw. Of course almost the same amount of people declared no interest in buying CATDAMMIT! but comparing our ratio to the TOP50's average - we were sitting in a very comfy couch. If your game has more downvotes than upvotes - no need to worry - only the "yes" votes counts on your way to the greenlight glory.

▪ Animated gifs do work
An image is worth a thousand words and animated gif is worth at least a few images :) Use one of the free online gif generators like http://gifmaker.me/ and make your avatar. Steam has guidelines concerning the avatar size (they want it big) but making smaller gifs doesn't seem to cause any problems. We had comments from people complaining about our animated avatar - they didn't like it, but were positively surprised by screenshots. Also - they DID click the animatd avatar they didn't like. Write me a better recommendation.

▪ Insert images into description
Make these paragraphs of plain text more attractive! Just add a line like this: [img]image url[/img] in the game's description to insert images. The images will be rescaled automatically to fit the description window's width.

▪ The first paragraph
It's the most important paragraph of the description. Why? Because it's being displayed in the pop-up next to your game's avatar on the games list (when someone rolls over the image). Its crucial that you test how much of the text fits the pop-up window. Make sure the copy here sums the game up and that it is engaging. 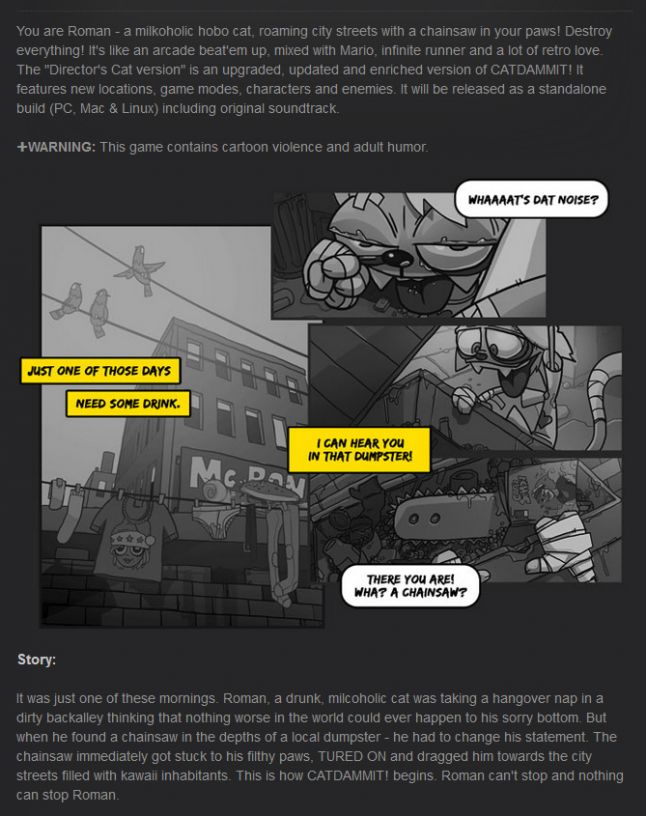 Some tricks that worked for other indies.

Ok, so what more can you do to increase the traffic to your greenlight campaign? You could, for example, pay for votes ('People! Vote "yes" and get a free steam code!") but that's a pretty shitty move. And soon you might be reported to- and taken down by Valve. So what are your options here?

▪ Parallel campaigns
Run a Kickstarter campaign at the same time as the Greenlight one. Link them together so they will share the visitors and multiply them like a rabbit farm.

▪ "Let's play" videos
If you don't want to release the beta yet, but still want people to see your game in action, why not contact some of the popular 'vloggers' out there? Don't be afraid of the fact that your game might break during the presentation or that the person playing might not actually enjoy your game. It's still in production, right? Also - it does not translate to downvotes! You may not get many upvotes but recognition is the gain here.

▪ Reddit pushing
And I'm not talking about just posting to /gaming or /indiegaming and waiting for the magic to happen (been there, done that). To make your news visible for the reddit community you need a solid backup from friends and fans upvoting your posts. Isn't it cheating? They say without such support posting on reddit is pointless.

Industry veterans warned us that Greenlight is a damaged system, that our chances are thin and that many games are left in the limbo. Instead of taking the easy way out (dealing with publishers) we decided to get on this ride. And hell was it worth it! Finishing in the TOP10 is a great motivation for a team of two with their first game.Thank You all for the great support You've shown us!

The original article can be found on our blog:
http://firflams.com/blog/view/we-have-been-greenlit-and-here-are-our-stats