In the latest Video Game Deep Cuts 'best links of the week' update, we've got everything from the United Nations to pro gamer Fuudo in the mix.
Simon Carless
Blogger
February 06, 2017 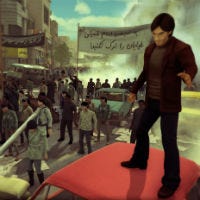 [Video Game Deep Cuts is a weekly newsletter from curator/video game industry veteran Simon Carless, rounding up the best longread & standout articles & videos about games, every weekend. This time out, we've got everything from the United Nations to pro gamer Fuudo in the mix as we zoom through links galore.

Actually, it's interesting to note that there almost as many longform videos as articles on the list. It took me a while to work out which YouTube channels and makers to follow. But there's a decent cadre of high-quality video content out there like Game Maker's Toolkit that isn't simply 'play through games and talk about them in real-time'. (Though that genre can be entertaining too!) Hope you dig 'em.

Virtual Insanity: Atari’s Last-Ditch Attempt to Save the Jaguar (Ernie Smith / Motherboard)
"Mocked by the press and struggling to make headway, Atari fruitlessly tried to revive interest in the Jaguar with a 1995 virtual reality demo at E3. The vaporware was strong with this one."

Here’s why the UN is getting interested in video games (Colin Campbell, Polygon)
"Many of us have experienced playing a game that changed our mind or our heart. Perhaps it was about injustices visited upon people who live different lives to our own. Or it was about an ailment or illness sitting at the periphery of our own experience. Or maybe it challenged lazy assumptions about otherness."

The MIT Dropouts Who Created Ms. Pac-Man: A 35th-Anniversary Oral History (Benj Edwards / Fast Company)
"Despite its dramatic success, few people know that this arcade classic was not developed by Japanese firm Namco, the company behind Pac-Man. In fact, a small group of MIT dropouts from New England created the game. [SIMON'S NOTE: Benj also has a Patreon to make more articles like this - go help him out!]"

Analysis: Why We Should Buff More Than Nerf (Core-A Gaming / YouTube)
"The struggle to balance a game often leads us to forget what balance changes should be doing in the first place. Make the game more fun."

Alt.CTRL.GDC Showcase: Student project Victor the Loser (Joel Couture / Gamasutra)
"Victor the Loser is a controller that wants to play a game with you! The trouble is, if it seems like you're going to win, Victor starts to interfere, waving flags in front of the screen, locking out buttons, and doing anything to undo your victory. [SIMON'S NOTE: this part of a whole set of interviews for these super-fun alt.controller projects, all playable at GDC 2017.]"

Game design patterns for building friendship (Daniel Cook / Lost Garden)
"In many online multiplayer games, players enter as strangers and remain strangers. Due to a variety of unquestioned logistics, economic and social signalling choices, other human beings end up being treated as interchangeable, disposable or abusable. We can do better."

Welcome to The Zero: the making of Kentucky Route Zero's open road (Joe Donnelly / PCGamer)
"Like Rapture is to BioShock, Los Santos is to Grand Theft Auto 5, and the Greenbriar residence is to Gone Home, The Zero—the mysterious highway that binds Kentucky Route Zero together—is as big a star as any one of the game's cast of dysfunctional characters."

John Romero's Irish Adventure (Noclip / YouTube)
"In our first episode of Noclip Profiles we travel to Ireland to talk to John Romero about his incredible career making some of the most influential first person shooters of all time. We learn about his young passion for programming, the reasons he left id Software and what he hopes to achieve with his new life in Galway."

Finding the Fun in FPS Campaigns (Game Maker's Toolkit / YouTube)
"2016 gave us two amazing first person shooters: Doom and Titanfall 2. In this video, I look at how these two games found different ways to bring the fun back to FPS campaigns."

How Pac-Man Went from Arcade to Art Gallery (Abigail Cain / Artsy)
"On Monday, it was announced that Namco founder and “father of Pac-Man” Masaya Nakamura had died on January 22nd at age 91. The Japanese company’s legacy has come to be defined by the success of its most popular arcade game, estimated to have been played more than 10 billion times in its 36-year history."

Reinventing Psychonauts For VR (Chad Dawson / GDC / YouTube)
"In this 2016 VRDC talk, Double Fine's Chad Dawson explains how the company figured out the best mechanics for taking a third-person puzzler/platformer into virtual reality. "

Why the future of Deus Ex lies with its past (Edwin Evans-Thirlwell / Eurogamer)
"Narrative and setting were intriguingly peripheral to this agenda, at least to begin with - Deus Ex may be the definitive cyberpunk game, with its dingy Blade Runner lighting, sleek trenchcoats and penchant for subcutaneous technology, but according to Spector, Ion settled on a sci-fi backdrop merely "to buy ourselves some room to play around - the real world, as we quickly discovered, was very limiting.""

From DMA to GTA: How DMA Design Changed the World (Nostalgia Nerd / YouTube)
"DMA Design begins with David Jones, Russell Kay, Steve Hammond and Mike Dailly, but finishes with over 250 employees, working ferociously to bring us some of the best entertainment to come out of the 1990s."

What Kids Can Learn When Blocks Get A Tech Boost (Jill Barshay, Hechinger Report / KQED Mind/Shift - via Level Up Report)
"At Forest Grove Elementary School, along the Ohio River just northwest of Pittsburgh, the Rust Belt is giving way to educational innovation. In a windowless room in the library, first- and second-graders experiment with a strange teaching device that’s half computer and half wooden play table. A giant computer screen looms over the table, and a touch-screen tablet is built into the table’s surface."

Game Cities: A Nékromegàn Tale of Two Cities (Konstantinos Dimopoulos / Gamasutra Blogs)
"Nékromegà, a game by lectronice powered by the RPG In A Box engine, is an unexpectedly ambitious freeware project, and also a 3D, voxel-based, adventure with RPG elements... Hopefully... Nékromegà will grow up to become an actually released game with an engrossing story to tell, vibrant cities to experience and possibly sack, clever mechanics, a unique take on undeath, and some very harsh yet cunningly subtle words about colonialism."

toco toco ep.45, Fuudo, Pro Gamer (toco toco TV, YouTube)
"In this episode, we will follow Fuudo, a pro eSports player, currently playing Street Fighter V, among other titles. Our first stop will be at the Dengeki offices, where Fuudo used to work. Dengeki is one of Japan’s largest gaming media and also publishes various magazines, novels and gaming guides."

Analysis: Inside (Errant Signal / YouTube)
"Inside is a game by Playdead that I have talked about at length for your viewing pleasure. Enjoy! [SIMON'S NOTE: Errant Signal's video analyses are always excellent, and this one, for one of the most intriguing games of the year, is no exception."

When Discs Die (Ernie Smith / Tedium)
"CDs were sold to consumers as these virtually indestructible platters, but the truth, as exemplified by the disc rot phenomenon, is more complicated."