Valve boss Gabe Newell has indicated that finding the right price point for its new console, the Steam Deck, was a rather painful process.
Chris Kerr
News Editor
July 16, 2021

Valve boss Gabe Newell has indicated that finding the right price point for its new console, the Steam Deck, was a rather painful process.

Officially unveiled yesterday, the Steam Deck is a portable Steam device (which can also be hooked up to a display using an official dock or powered USB-C hub) that allows users to access their entire Steam Library "just like any other PC."

Valve says the Steam Deck is capable of delivering enough performance to "run the latest triple-A games in a very efficient power envelope," and intends to make the new console available from as little as $399 when it launches later this year.

As shown below, there will be three Steam Deck variants at launch retailing for $399, $529, and $649, respectively, all offering a variety of storage options and additional features like "anti-glare etched glass."

Explaining how Valve landed on those price points, Newell told IGN it was necessary to be "very aggressive" to win consumers over, and claimed that price performance was "one of the critical factors in the mobile space."

"I want to pick this up and say, oh, it all works. It's all fast. It's all... and then price point was secondary and painful. But that was pretty clearly a critical aspect to it," continued Newell. "But the first thing was the performance and the experience, [that] was the biggest and most fundamental constraint that was driving this."

The Steam Deck will be available to reserve from 10am PDT today and will begin shipping in December 2021. 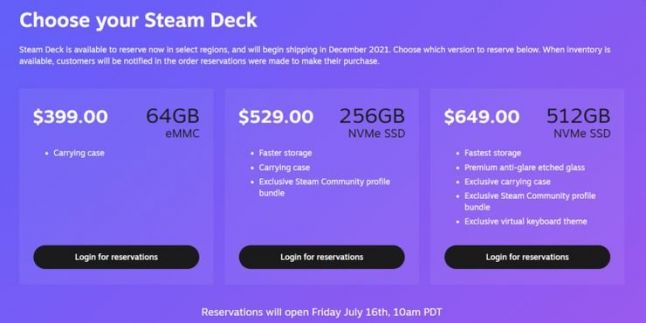