According to Gamoloco, which has been tracking Twitch live-streaming viewership data since 2014, that's a 270 percent viewership increase on previous release Call of Duty: World War II.

As the graph below shows, Black Ops 4 has outshone the past four Call of Duty titles by some margin, and Gamoloco believes the game's 'Blackout' battle royale mode is largely responsible for that change in fortunes.

While there are likely some other factors at play, such as the growth of Twitch itself and Activision's own focus on building a streaming community, the 'Battle Royale effect' does appear to be in full swing.

For those interested in where those figures came from, Gamoloco says its numbers are taken directly from the APIs of major streaming platforms, including Twitch. You can find out more about the company's methodology right here. 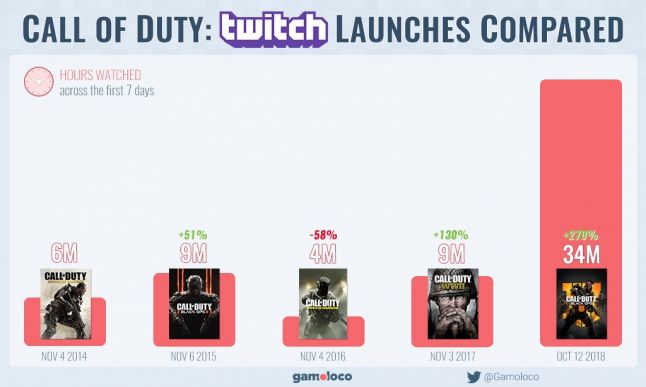