After 14 years at Ubisoft spanning work on everything from Beyond Good & Evil to Assassin's Creed, Valiant Hearts content director Yoan Fanise is calling it quits and getting out of AAA development.
Alex Wawro
Blogger
March 12, 2015

After 14 years at Ubisoft spanning work on everything from Beyond Good & Evil to Assassin's Creed, Valiant Hearts content director Yoan Fanise is calling it quits and getting out of triple-A development.

This is somewhat surprising, because the last time I talked to Fanise (alongside his fellow Valiant Hearts content director Paul Tumelaire), he credited the "crazy and a bit artistic" culture of his now-former studio, Ubisoft Montpellier, as being integral to the development of Valiant Hearts.

But while Fanise seems fond of his local development community ("Montpellier will soon become the Montreal of Europe, and there is no 2 meters of snow in winter"), there's something about the experience of working on a small team within a massive studio network that whet his appetite to leave triple-A and take a look at indie life.

We had a bit of a back-and-forth on the topic this week that might be interesting to other developers, so I've gone ahead and published an edited excerpt of our conversation below.

You've been at Ubisoft since 2001, when you worked on Beyond Good & Evil. Why are you leaving after 14 years, and where are you headed?

It was a very hard decision. The last 14 years in Ubisoft are unforgettable; it is like a family. I am proud to have been part of some of the most creative teams in the industry.

I’ve been lucky to develop games in very diverse types and sizes; the diversity of Ubisoft games and people is one of its best strength. As you can see in the photo, Beyond Good & Evil was a 30+ team production with a unique, creative mood that Michel Ancel is able to bring. 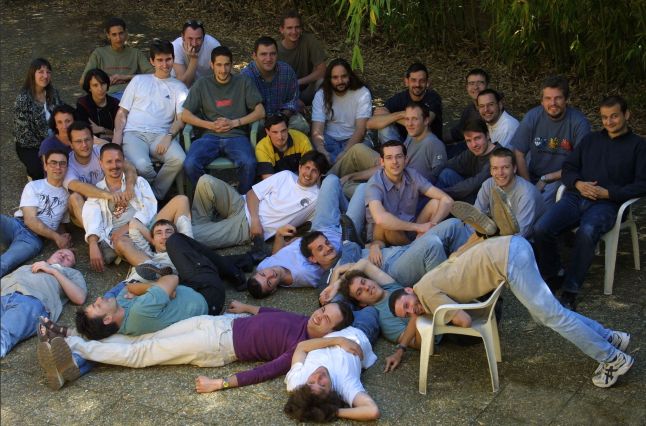 A photo of the Beyond Good & Evil team, provided by Fanise

The more we grew, the more this mood diminished. 100, 250, 500 people…it was necessary due to the technical evolution and AAA requirements, but on the creative and human side something was missing.

What do you mean exactly?

I mean the industrial scale and organization of a giant project like Assassin's Creed removes some direct connection between people from different job categories, for example. Your interactions are limited, and it is really difficult to have a global vision of the finished game. But at that scale, it would be very hard to make it different.

That’s why I decided to restart Valiant Hearts after Assassin’s Creed III, a project on hold that had been imagined by the incredibly talented artist Paul Tumelaire.

On Valiant Hearts we wanted to bring back the Beyond Good & Evil spirit, the collegial creative process; we were all involved with the script, the level design, the game design. Yves Guillemot, Ubisoft's CEO, fell in love with the project and made it possible even if the subject was not “sexy” marketing-wise.

Now the game is a success with more than 1 million players; I receive tons of messages from gamers, touched by the story, realizing that videogames can also deal with serious subjects, ask deeper questions and still be fun to play.

But reality is sometimes harsh, and Valiant Hearts was like a gastronomic food truck on the parking [lot] of a giant restaurant.

I mean, business-wise, even if the game is a success, with over a million players and many awards, this is still small revenue compared to blockbusters. That's the harsh reality.

Maybe a better metaphor would be like, a successful chain of restaurants allows some of its cooks to install a foodtruck on the parking lot, then asks them to go back inside; what would you do?

That's a tricky question these days. What will you do?

There are a lot of really interesting opportunities, and I’m still taking time to find the one that is most exciting, Why not go real indie after have been called “fake indie” during my 2 years on Valiant Hearts?

We’ll see in the near future.