Identifying your potential market, and being able to sell to it efficiently, that's one of the biggest challenges in independent game development. I'm always on the lookout for new and interesting ways to get games into the hands of those who want them -- and I recently found one, from Prague-based Amanita design, the game company responsible for the Samorost series, Machinarium, Botanicula, and a bunch of new weird stuff.

Last February, I had the good fortune to visit Amanita in person. The studio is housed in an old apartment building, a relic of the Austrian empire, with a curious tile fireplace that looks you could wood-fire (the most elegant) pizza inside of it. The homey apartment occasionally houses visiting game devs, and every nook, cranny, and niche is filled with some sort of Amanita figurine, piece of obscure artwork, or something else. But that's only the corners -- The white walls of the studio are largely bare.

After looking at some of the adorable and engaging puzzles in Samorost 3, and catching a glimpse of some new Amanita projects, Amanita director Jakub Dvorský and I went to meet others for a Prague game dev meetup. On the way out, I looked around their foyer, which was full of Amanita games on disc. One in particular struck me as odd -- it was a paper thin piece of cardboard - I presumed it was a sheet with a download code, but upon feeling it, realized there was a bare disc inside. 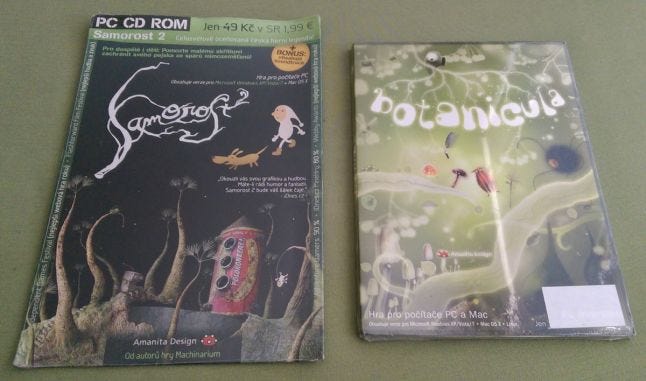 (A paper-thin newsstand copy of Samorost 2 next to a regular Czech edition of Botanicula.)

I asked Jakub what was up with it. "Oh, we sold those at newspaper stands," he said. Now this is interesting. It turns out there were a number of people in the Czech Republic complaining that they couldn't buy Amanita's games, for a variety of reasons. "Some people were complaining they couldn't buy it digitally because they didn’t have a payment card or they are afraid to use it online," he tells me later. So Jakub got together with a friend in the print publishing industry, and decided to bring his games to the internet and card-less. Newspaper stands seemed the perfect vehicle. "The news stand edition was also cheaper than the digital version (99 CZK, which is roughly the equivalent of $5) so nobody could argue about the price."

They released each "newspaper" version of the game 6 or 7 months after the proper release of the game. It wasn't that difficult to put together, he says, but Jakub is pretty typically dismissive of ever having a plan, or a reason behind the innovative things he does. "It was very easy because everything was managed by a publishing company owned by my friend," he says. "It was kind of an experiment for both of us. They usually publish only printed magazines so they knew the news stand business. They also do desktop publishing and printing. It took only about a month from the initial idea to the shelves."

And in that month's time, the audience that couldn't buy Amanita's games now had a vehicle through which to do so. In total, across Machinarium (99 CZK), Botanicula (99 CZK) and Samorost 2 (which represents their first attempt, and was just 49 CZK, or about $2.50), the company sold 20,000 units. It's not the biggest number in the world, but it's 20,000 units they were otherwise not going to sell, and it took just a month of work.

More than that, I admired the fact Jakub wanted to make sure everyone could buy the game in the way that made the most sense for them. In the Czech Republic, while it's a modern city, it's also a very old one, and older, traditional media still sells. Celebrating this fact with a special edition feels uniquely Czech, and very Amanita. 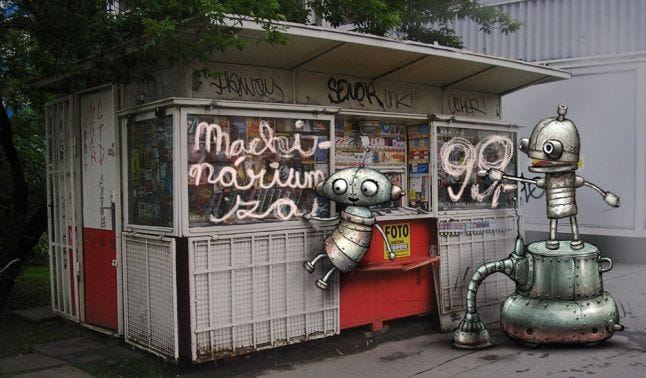 (Promo image for the newspaper editions, featuring a typical old-style news stand from the communist era.)
Get daily news, dev blogs, and stories from Game Developer straight to your inbox
Subscribe