A thorough test market plan will help games achieve a successful global launch. Learn about the pros and cons of testing in different regions and what to look out for during this important stage of the game lifecycle.
James An
Blogger
August 04, 2016

At Kongregate, all of our published mobile games go through a rigorous test market period (a.k.a. geo-locked launch) lasting at least a month. This is an important phase of the mobile game product cycle, as it allows the team to gauge the strengths and weaknesses of the title through data-driven KPIs, and to make changes to address any issues we observe before we release the game globally, whether they are crashes/bugs, tutorial/retention drop-offs, monetization or ad engagement. In this blog post, we share our learnings from running test market campaigns, with a focus on the pros and cons of running tests in different parts of the world.

The Philippines is a popular country for testing. Players are cheap to acquire with Cost-Per-Installs (CPIs) typically ranging from as low as $0.30 to $1.00. This allows developers/publishers to hit a meaningful number of installs quickly and stay within budget. The caveat is that games with a niche theme and/or art might see higher CPIs; for example, our recently launched Pocket Politics (iOS/Android) saw a much higher CPI because of its American political theme.

For stability and compatibility testing, the Philippines is a great place to consider, as one will observe a wide range of devices and OS versions. Conversely, the in-game KPIs collected in this country are often not reliable or indicative of what KPIs might look like in the U.S. and countries in the Western world. Players are less likely to stay in the game and less likely to engage and make purchases, so don’t despair if you are seeing low early retention and monetization numbers!

Once you have verified and improved that stability of the game, you can expand to additional regions. The Nordic countries are great to run tests in because the player behaviors resemble those of U.S. and other Western world countries’ players, while CPIs are usually lower than those of English-speaking countries like Canada, Australia and New Zealand (expect CPIs less than $4).

We often run tests for early retention (D1 and D7), ad engagement, and monetization in these countries, as the KPIs will give us a good idea of what they might look like once a game is launched globally. It is also possible to run A/B tests in this region and get meaningful results. One thing to keep in mind is that since these players are acquired through paid campaigns, KPIs will generally look higher than global metrics. For example, a D1 retention of 50% might turn into 40% globally when you get a mix of organic and paid players, as well as players from both high-performing and low-performing countries.

These three countries are the most popular among mobile game developers and publishers because players here most closely resemble those in the U.S. market and thus metrics can be more relied on to estimate U.S. KPIs. As mentioned before, keep in mind that players acquired through UA often show higher KPIs and engagement than those of organics.

The downside to running your test market in these countries is that the costs could be very high, as you will be competing with other developers and publishers who might be willing to bid up the prices to get volume faster. 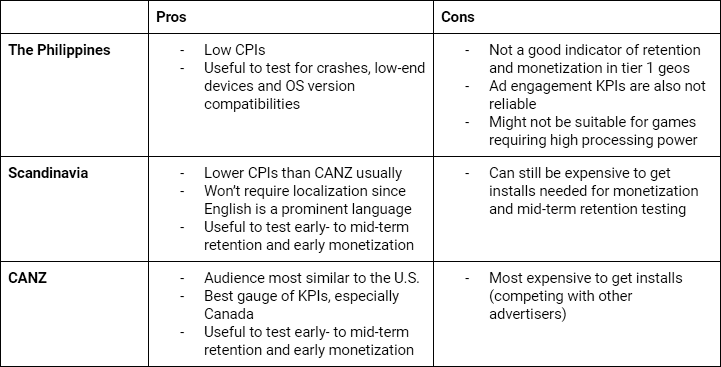 Practical Things to Keep in Mind

And that’s it for now! For other ways of testing, and the pros and cons of each, check out our CEO Emily Greer’s presentation at this year’s Game Developers Conference.

James is an Associate Product Manager at Kongregate, but is better known as an aspiring Duck Game player internally. He spent 6 years in New Zealand and is a fan of Weet-bix, kiwis and feijoa candies as a result.