It’s been nearly ten years to the day since Microsoft released the Xbox 360, and the man who led the charge to launch an Xbox successor after Microsoft lost billions on the original is still thinking about the experience.

“My leadership was sorely challenged,” former Xbox chief Robbie Bach told me during a recent phone call. “I learned more in my time at Xbox than I did in the other 12 years I was at Microsoft, by a factor of four.”

Bach left Microsoft in 2010, alongside fellow Xbox exec J Allard, and in the ensuing five years he’s worked as a corporate speaker, a board member of various nonprofit and for-profit companies, and an author.

That last endeavor is what brought him to the phone this week to reminisce about Xbox  -- he’s making the rounds to promote his book, Xbox Revisited, which tries to explain how the lessons he learned at Microsoft can be applied to solving civic problems.

It’s as an author, rather than a games exec, that Bach is best able to relate to many game developers and the discoverability problems they now face.

“If it helps developers feel better, as an author, I can tell you that discoverability problem troubles other industries too,” he tells me, with a laugh. “This is a wider entertainment problem. People who create things, it’s very hard for them to break through the clutter.”

What’s interesting about the Xbox 360 in this regard -- and it’s something that Bach doesn’t really touch on in his book -- is that many indie developers were empowered to break through and get their work in front of lots of people thanks to Xbox Live Indie Games, the “do-it-yourself” console game marketplace that was born on the Xbox 360 (as "Xbox Live Community and finally marked for death two months ago.

Bach seems to have trouble remembering who, exactly, came up with the idea that became Xbox Live Indie Games, but he’s certain that Allard deserves the lion’s share of the credit for doggedly pushing the concept through Microsoft’s internal review processes.

“J gets a huge amount of the credit for Xbox Live. He was, at some level, the mastermind behind what happened there,” says Bach. “Whether he was the genesis of the idea or not, I honestly have no idea. I'm sure Ed Fries had some impact on it as well, because he was always involved when we were talking about game development itself.” 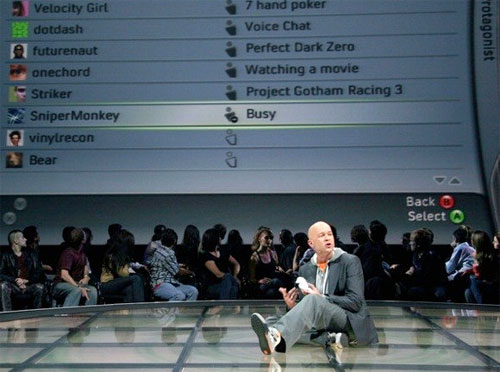 "One of my favorite Xbox 360 memories is...we had this stage [at E3] with an angled platform," recalls Bach. "And J somehow decided the staging was right for J to just sit down and talk to people, cross-legged on the floor."

Of course getting a game on XBLIG required developers to work in XNA, with all the ups and downs that entails. But when XNA was pronounced dead in 2013, many developers mourned its passing and reflected on the important role it played in their professional (and sometimes personal) lives.

For his part, Bach remembers developers’ early reactions to XNA being slightly different.

“A very funny moment that sticks out in my mind, which nobody but J Allard and I will ever remember, is when we launched XNA,” he says, referring to XNA's initial unveil at the 2004 Game Developers Conference in San Jose. He and Allard were standing in front of, predictably enough, a room full of game developers, and things weren’t going so hot.

“Frankly, it wasn’t the most fantastic speech J and I have ever given,” recalls Bach. “The energy in the room was...well, it was a little low.” But soon they come to their big moment in the presentation -- announcing XNA and unveiling the logo.

“We pushed the button to show the slide announcing XNA, and slide comes in and it makes this sound as it hits -- it makes sort of a *DOINK* sound,” says Bach. “So the room has been completely silent, and then this slide makes this incredibly loud *DOINK* sound, and...the room remains totally silent.”

This was, incidentally, part of a keynote speech at GDC that year. You can watch it here on the GDC Vault, if you'd like to see this moment for yourself.

“So J and I sort of look at each other like ‘Oh, I guess we delivered that message really well, huh?” Bach recalls, seemingly as if it just happened. “XNA became this whole cool thing, but the unveiling event was such a low point for me.”

"When we get hyper-focused on the work we're doing we lose sight of our personal lives, and the civic life around them. It's not healthy."

Bach seems very comfortable reminiscing about his low points at Xbox: the Red Ring of Death fiasco, the underwhelming launch of XNA, the time he tried to quit during the original Xbox’s development. But it’s that last experience that forms the core of his book, and he thinks he learned some things from struggling to lead Xbox from the top that even developers just entering the industry can learn from.

“One of the things I learned to do at Xbox was plan business trips way in advance, and just tell people that's what you're going to do, and if they don't like it, tough,” he says, referring to his decision many years ago to minimize how his work disrupted his home life by requiring all business trips to be booked nine months in advance. “Well, the average person can't do that. But the average person can absolutely control when they come into the office, when they leave the office, when they're able to separate their work life from their personal life. It's all just about scale.”

I’m trying to be succinct because Bach is prone to speaking at length about work-life balance and the importance of devoting time to your family and your community alongside your game -- he wrote a whole book on the subject, after all, so it doesn’t bear much further mention here.

However, I do think it helps to round out one of Bach’s chief lessons learned from his time launching Xbox and the Xbox 360, all those years ago: that platforms come and go, and with them jobs to take and games to make. Focusing on your work is important, but it’s also important to step away and focus on having a full life, because at some point the project (or projects) that dominate your nights and weekends will be just a footnote in someone else's retrospective.

“Life's not just a block of code,” adds Bach. “Maybe that sounds awkward, but I saw it in myself and I see it in others: when we get hyper-focused on the work we're doing we lose sight of our personal lives, and the civic life around them. It's not healthy.”