Kickstarter has revealed that crowdfunding for games leapt up during 2017, with the amount of cash being pledged rising by 30 percent since 2016.
Chris Kerr
News Editor
January 03, 2018

Kickstarter has revealed that crowdfunding for games leapt up during 2017, with the amount of cash being pledged rising by 30 percent since 2016.

Curiously, and perhaps worryingly for game devs, that overall shift was primarily down to the success of tabletop games.

According to official data handed to Polygon, there were almost 400 more successful tabletop game campaigns in 2017 than in 2016.

Naturally, that meant a rise in pledges, and (as the graph below shows) last year's successful tabletop campaigns pulled in $137.7 million compared with $101.2 million in 2016 -- an increase of around 36 percent.

Despite that slight decline, the amount of cash pledged hovered steady at the $17 million mark, and the average campaign actually earned around $3K more in 2017.

Although there's some leeway with those numbers given Kickstarter's reluctance to share exact pledge figures, it's interesting to note the growing appetite for tabletop games compared with the apparent stagnation of video game campaigns. 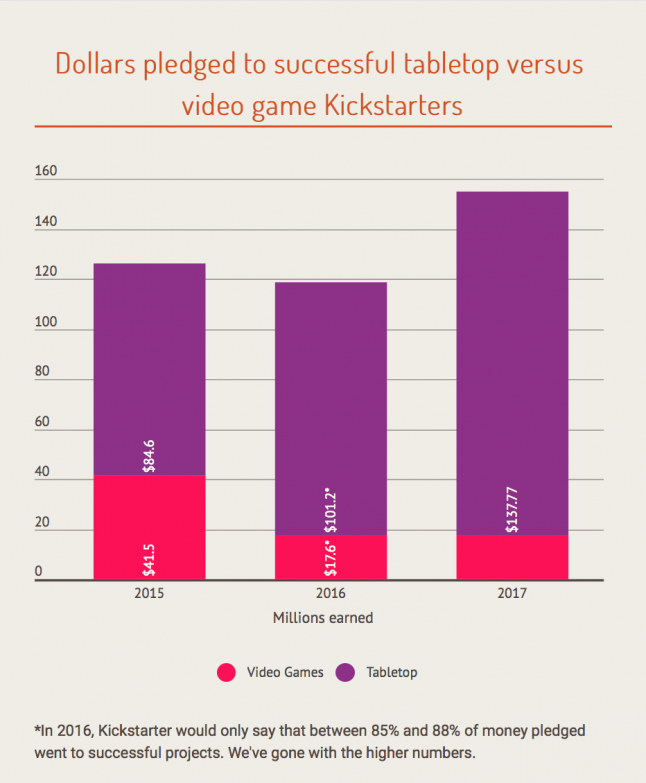