The Nintendo Switch is still driving growth at Nintendo, which has just released its financial results for the three months ended June 30, 2020.

Lifetime Nintendo Switch sales now total 61.44 million units, meaning it has amassed over four times as many sales as its predecessor the Wii U -- which sold 13.56 million units during its lifespan.

The biggest contributor, however, was Animal Crossing: New Horizons, which posted quarterly sales of 10.63 million units. The popular lifestyle simulation has now sold over 22.40 million units to date, making it the second best selling title on the platform.

"This increase in sales was made possible by the large number of new consumers purchasing the game, in addition to the people who had played past titles in the Animal Crossing series."

Digital sales at the company grew by 229.9 percent year-on-year to 101 billion yen ($956 million), and accounted for 55.6 percent of total software sales on Nintendo platforms.

Nintendo noted that its mobile business has also witnessed "steady growth," with mobile-related income increasing by 32.7 percent year-over-year to 13.2 billion yen ($125 million). Animal Crossing: Pocket Camp was a key growth driver on smartphones, with the mobile title "benefiting from the synergistic effect of the promotion and release" of Animal Crossing: New Horizons.

Commenting on the impact of COVID-19, Nintendo said the pandemic introduced some hurdles with regards to Switch production, but noted that it has "almost recovered" from those setbacks. It warned that a repeat situation could occur, however, if the impact of COVID-19 "expands in the future."

Based on its current performance, Nintendo is sticking with its financial outlook and predicting net sales of 1.2 trillion yen ($11.3 billion) and profits of 200 billion yen ($1.89 billion) by the end of the fiscal year.

"There are no changes to the original financial forecast. For Nintendo Switch, in addition to titles such as Paper Mario: The Origami King and Pikmin 3 Deluxe, we also plan to distribute The Crown Tundra, the second round of add-on content available with Pokémon Sword Expansion Pass and Pokémon Shield Expansion Pass, this fall," said the company.

"There are also a robust variety of appealing titles from other software publishers scheduled to be released. We will work to keep the platform active with new titles and by reinforcing sales of popular titles that have already been released." 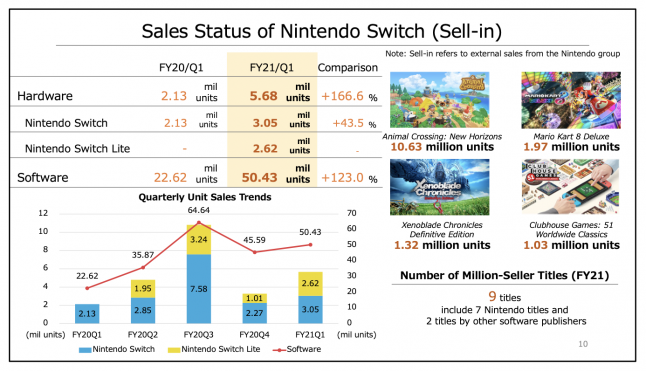