Strategy and role-playing games are most bankable on mobile

A new report from SurveyMonkey Intelligence shows that when it comes to mobile games, those in the strategy and role-playing genres are the most lucrative.
Chris Kerr
News Editor
August 22, 2016

A new report from SurveyMonkey Intelligence shows that when it comes to mobile games, those in the strategy and role-playing genres are the most lucrative.

Combined, they generate more than 30 percent of the U.S. mobile game market's total revenue, despite being behind the rest of the pack in terms of downloads, usage, and engagement.

Breaking it down, strategy games bring in monthly revenues of $194 million, while their role-playing counterparts generate a respectable $162 million every month.

Their closest competitor is the adventure genre, which hardly registers a challenge with monthly revenues of $114 million.

SurveyMonkey's Mike Sonders suggests the success of those strategy and role-playing titles is rooted in their ability to monetize their active players at high rates.

Looking at those genres with the best average revenue per daily active users (ARPDAU), this time role playing beat out strategy to the top spot.

In July alone, role playing and strategy titles made twice as much revenue per daily active user than any other category, with ARPDAU's of $0.66 and $0.50 respectively.

"Strategy and Role Playing games like Clash of Clans, Mobile Strike, and Game of War drive the highest ARPDAU in the mobile game industry by a wide margin," writes Sonders. "These games dominate the top grossing charts, with games in these categories making more than $10 million per day combined in the U.S.

"But beware: these categories are also the most competitive, especially for user acquisition."

With that in mind, he suggests it might be better to look towards the adventure, action, and puzzle categories, which all rank in the top five genres in terms of downloads and monthly active users. What's more, all three currently enjoy above-average engagement and monetization.

As for which genres to avoid, the report highlights music, trivia, and education titles as high-risk pursuits lumbered with "bottom-of-the-barrel engagement rates and poor monetization rates."

For a more in-depth breakdown and even more number crunching, you can find the full report over on the SurveyMonkey Intelligence blog. 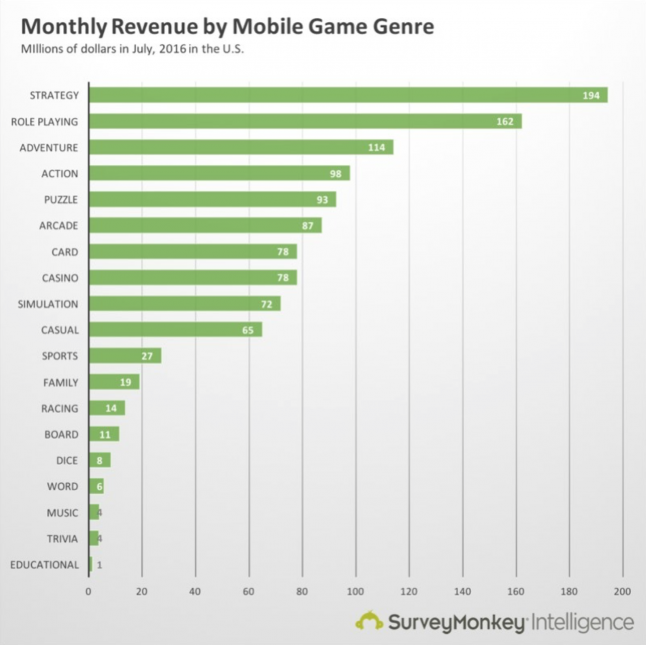