Valve has rolled out a number of tweaks and changes to Steam’s recommendation system that aim to breathe some personalization back into suggestions, and increase recommendation clicks in the process.
Alissa McAloon
Editor-in-Chief
September 12, 2019

Valve has rolled out a number of tweaks and changes to Steam’s recommendation system that aim to breathe some personalization back into suggestions, and increase recommendation clicks in the process.

Those alterations involve some bug fixes, namely toning down the degree to which Steam’s Top-Rated Games ranking affects Similar by Tags recommendations, and changing some elements of how Steam calculates a game’s popularity.

This ultimately led to a more personalized recommendation feed that, as Valve notes in a blog post on the update, increased both the variety of games popping up in a user’s recommendation section and the rate at which Steam users interacted with those titles.

The changes originally rolled out as an update pushed to a small group of Steam users, and have now been pushed to Steam as a whole.

During that small-scale experiment, Valve notes that players in the test sample engaged with games that popped up in Steam’s algorithmically generated Recommended for You section more often than those running the previous version of the recommendation system.

Both unique gams visited and average visits per game rose in that experimental group, data outlined in the chart just below. Tag-driven store areas also saw a boost in both purchases and wishlisting across more games, something Valve attributes to the new system’s tendency to help Steam users “[find] things they didn’t even know they wanted.” 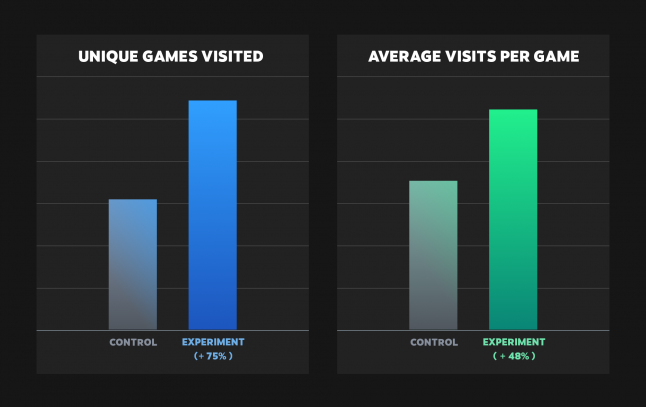