I've recently released my latest game, Battle Royale Tycoon, on Steam and I've always been a fan of the many articles about game sales that have been published here so I'd like to contribute by sharing my own numbers.

If you prefer to see this post in video form here it is:

The game was fully released on September 2nd 2019 after spending 9 months in Early Access.
Sales for the First Month were
3700 copies
$27,000 gross revenue

The total including all the sales during 9 months in Early Access
15000 copies
$120,000 gross revenue

That's a pretty nice number, it's certainly not Cuphead or Shovel Knight but for a solo game developer it's very good.
However the number by itself doesn't tell the whole story, first of all this is gross revenue, after taking away Steam's cut, chargebacks, refunds and taxes the net amount is quite a bit less than half of that somewhere around $50,000 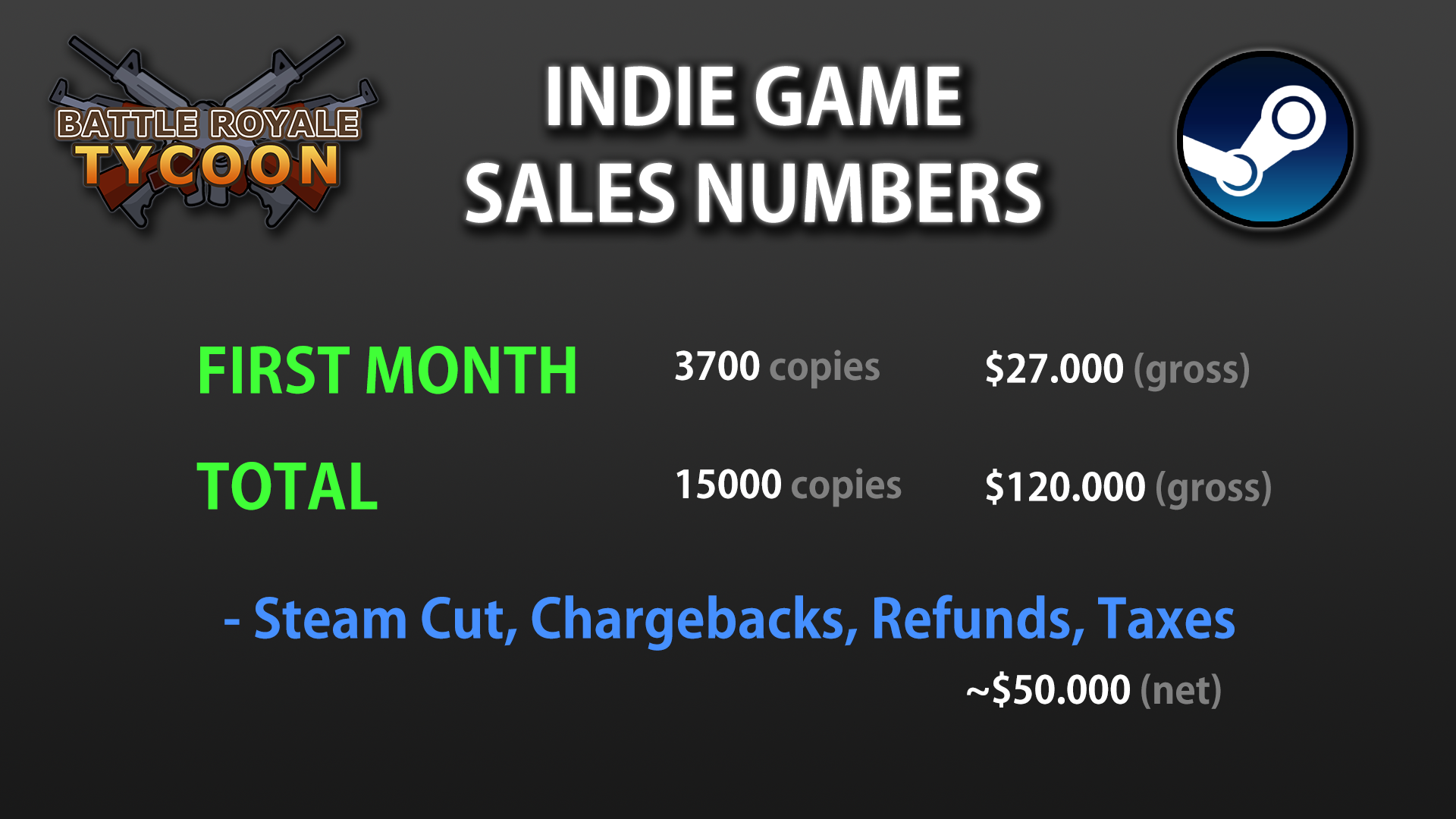 My goal with this post is to add another sales stats data point into the world, having more sales data out there will hopefully help people have a more realistic expectation of what indie game development is like.
If you're an aspiring indie dev I would recommend you search around for the various developers that have published sales stats so you can make a better more informed decision about what you can expect before jumping in.

I've been making games on Steam for 7 years now with 8 games total published covering a variety of genres from Action to Strategy to Management.

Some of my games have been successful and some have been complete flops, that's one of the main reasons why a single game sales number is not telling the whole story.
I would say if you want to be a successful Indie Game Developer and have a long career it is essential to manage your finances wisely, you should always try to keep enough money in the bank so you can withstand a massive flop because it will happen.

There's an excellent talk by Jake Birkett of Grey Alien Games which perfectly encapsulates what has also been my experience.

https://www.youtube.com/watch?v=JmwbYl6f11c
The title itself is perfect, How to Survive in Gamedev for Eleven Years Without a Hit.
My own games have never been hits but I'm still here after 7 years thanks to constantly learning, adapting and careful risk management.

Another great one is by Jeff Vogel of Spiderweb Software which again is the story of a long successful career without massive hits.

https://www.youtube.com/watch?v=stxVBJem3Rs
His business model is to focus on a very very specific niche genre which are old school RPGs and serve that niche audience as best as possible.
Since he's been in business for so long he also creates remasters of his very old games so that's another benefit of having a deep backlog over a long career.

Yet another one is Cliff Harris from Positech games
He's definitely made some games that you could call hits like Democracy 3, Gratuitous Space Battles and Production Line.

http://www.positech.co.uk/cliffsblog/
Also in business for over 10 years and his blog is full of excellent information.
He also experimented with being an indie publisher and actually published Shadowhand which was made by Jake Birkett.
So if you manage to stay in business for a long time and keep gathering an audience and industry contacts that's another potential avenue you can take.

And finally I've also written a Blog post a couple of years ago on my experience as an indie bottom feeder.

https://www.gamasutra.com/blogs/HugoCardoso/20170517/298176/Sustainable_living_as_an_Indie_bottom_feeder.php
I wrote that right before I published Hyper Knights which was my 5th game and I talk a lot about my strategy for surviving in this business for the long run.
I'm still here 2 years after that so I'd say my strategy is working.

Here are some stats on the game itself.

This has been my most complex game by far, the game is 90,000 lines of code long which is quite a bit, definitely more than any of my other games.
I first started working on it in April of last year which was also around the same time that I started my YouTube channel posting Game Development Tutorials.
So that's a total of 17 months of development for the most part working full-time.
I published the Coming Soon page on June 2018.
And the game was released into Early Access on December 10th 2018.
Then finally after 16 updates and 9 months in Early Access the game was fully released on September 2nd 2019. 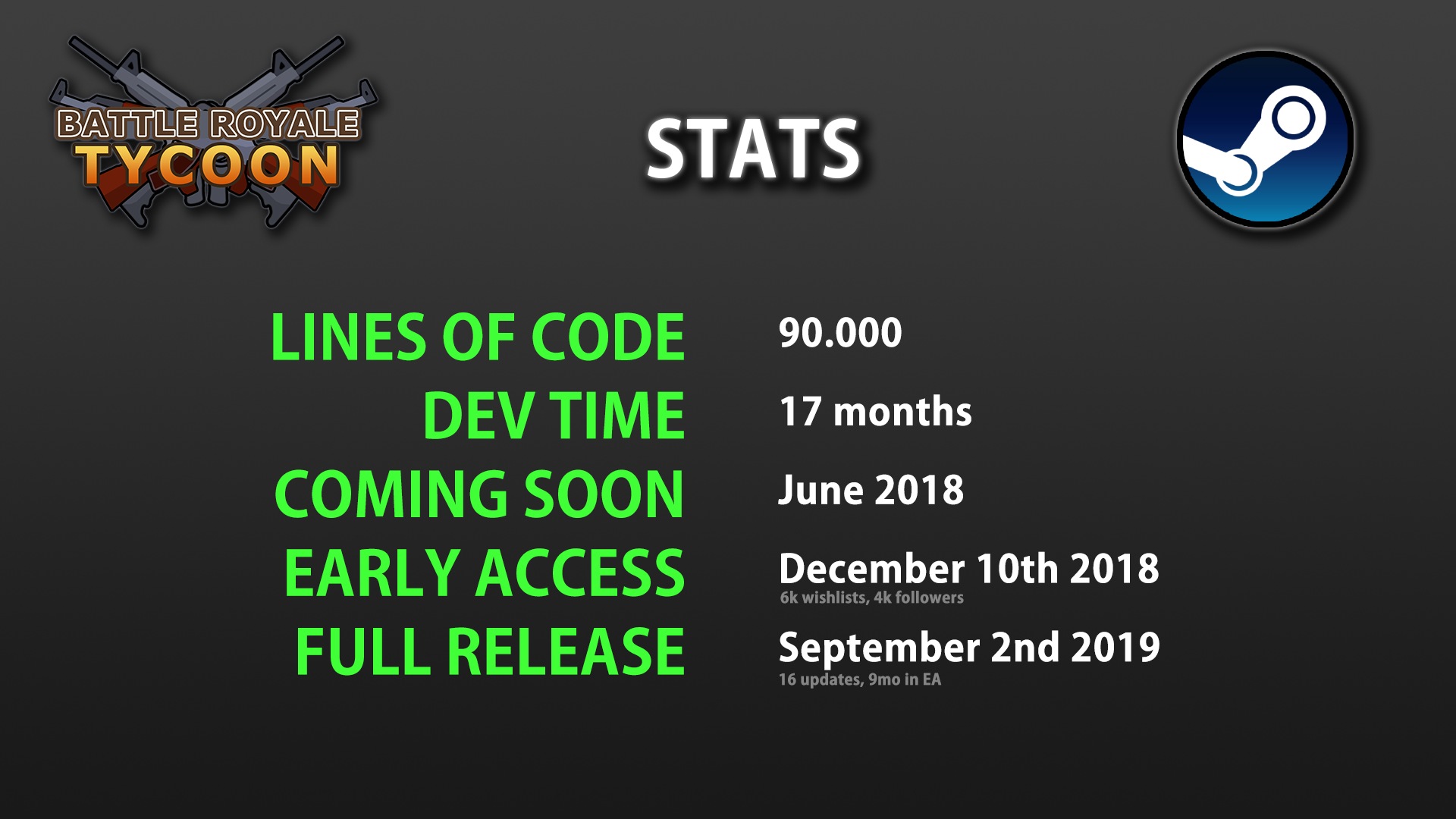 The game launched into Early Access with 6000 wishlists and around 4000 followers which are pretty decent numbers.
Nowadays that is the most important metric for finding success on Steam, you need to announce your game as soon as possible and start gathering wishlists and followers right away.
The way you find success on Steam is by selling a decent number in the first few days and getting at least over 10 reviews, once you do that you're no longer competing with the trash but rather only with the other great games.
So having a large number of followers and wishlists will help you achieve that and stand out from the noise.

Again the game sold in total 15000 copies for $120,000 gross which equates to roughly $50,000 net.
For 17 months of work that's a decent amount so I would certainly call this game successful.
Over time I will slowly discount the game as usual and expect it to keep selling a decent amount for quite a while.

What went Right: Genre, Idea, Name
I first started working on the game as an exploration of AI in a Battle Royale game. I built a map and put some units fighting inside it and found that it was quite fun to watch them fight.
At the time Battle Royale was all the rage so I saw that as a marketing opportunity, if you want to make it as an indie developer you really need a very compelling concept.
So I thought: "Ok Battle Royale is a very popular genre and my most successful games have been my management games, why don't I try to take the Battle Royale game mode and apply it to a tycoon?"
Then with thinking about how to make that concept work I thought about one of the games that consumed my childhood which was RollerCoaster Tycoon.
And just like that the idea was formed, make RollerCoaster Tycoon but with shooting arenas instead of roller coasters.

The player would build the park, build the arenas and all the other buildings and the guests would go in, queue up, shoot each other and have fun.

Finally the name I think was very well chosen
You might say that the name Battle Royale Tycoon sounds very generic which is true but it also very clearly communicates what the game is about.
Which again goes back to how important marketing is nowadays and how you need to make things as easy as possible on yourself, better to go generic and capture some peoples attention in the first 5 seconds than to go extremely unique and get lost in the noise.

Developing the game also went well, making the queues and managing the buildings was a ton of work but a ton of fun.
This was a very programming heavy game which means very difficult and complex but programming is the part that I love most about game development so it was also very compelling to make.

What went Wrong: Time
Time is extremely valuable and for an indie dev spending 17 months on a single project is way too much. The longer you spend working on a game the harder it will be for that game to turn a profit.
Part of the reason for the long dev cycle was due to how I was trying to keep my YouTube channel running at the same time. That led to me being overworked for quite a while which has a serious impact on productivity.

Another part is simply due to the genre, the game is 90.000 lines long so when you're trying to make something that complex it will take time.
For my next game I will certainly aim for a much shorter dev cycle, probably around 6 to 8 months which I think is the ideal time for a solo game developer.

Another thing you should keep in mind if your goal is to become a professional indie game developer is to keep yourself mentally sane and physically fit.
That might sound weird but believe me its very important, this is a marathon and not a sprint.
Don't work yourself to death, remember to take frequent breaks and get up from your chair so you can keep doing this for a very long time to come.

I hope you found this post useful, thanks for reading!