Sony has released its financials for the second quarter ended September 30, 2019, and both sales and operating income are down in the company's video game division.
Chris Kerr
News Editor
October 30, 2019

Sony has released its financials for the second quarter ended September 30, 2019, and both sales and operating income are down in the company's video game division.

According to the report, quarterly sales within the Game & Network Services (G&NS) division dropped by 17 percent year-on-year to 454.4 billion yen ($4.17 billion), while operating income fell by 28 percent to 65 billion yen ($596.8 million) over the same period.

"Game software sales decreased primarily due to the absence of the major first-party hit title Marvel's Spider-Man, which was released in the same quarter of the previous fiscal year, and a significant year-on-year decrease in the contribution from free to play games," commented Sony.

Due to that drop-off in hardware sales, Sony has reduced its full-year shipment forecast for the PlayStation 4 to 13.5 million units from 15 million units.

The company has also downwardly revised its full-year fiscal forecast for the G&NS segment due to the delayed launch of The Last of Us Part II, which will now see the title launch during the next fiscal year.

As as result of that postponement, Sony now expects to see sales in the division hit 2 trillion yen ($18.4 billion) and operating income total 240 billion yen ($2.2 billion) by the end of the fiscal year on March 31, 2020. 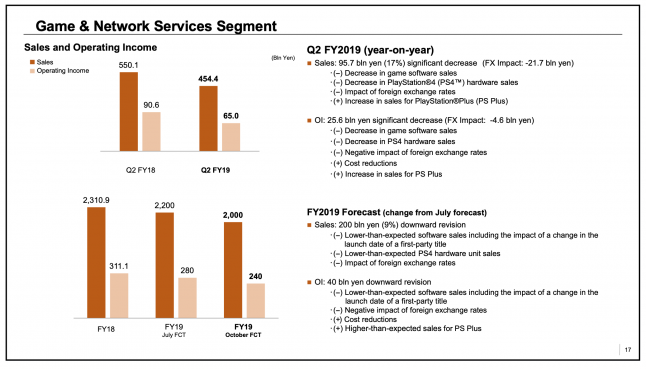 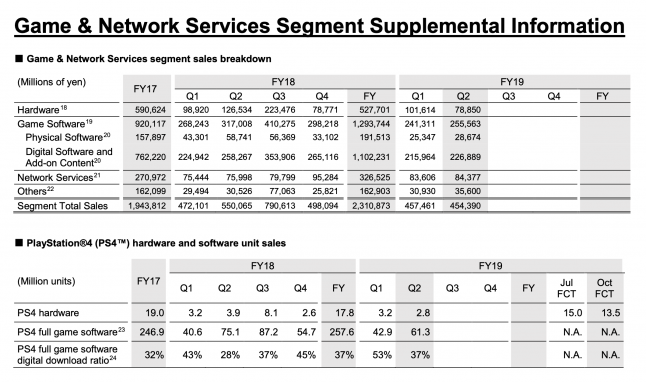