Sony has released its financials for the third quarter ended December 31, 2018, and software is bringing home the bacon for the Japanese giant.
Chris Kerr
News Editor
February 01, 2019

Sony has released its financials for the third quarter ended December 31, 2018, and software is bringing home the bacon for the Japanese giant.

Although PS4 sales are on the wane, Sony said the drop off was in-line with its expectations, and also explained the decrease in operating income was due to the "aggressive promotional activities" it took in an attempt to sell more hardware.

Looking ahead, Sony hasn't adjusted its full-year forecast, and still expects to see PlayStation 4 hardware sales reach 17 million units by the end of the fiscal year.

It's also expecting operating income and sales in its game division to reach 2.35 trillion yen ($21.5 billion) and 310 billion yen ($2.8 billion) respectively when the financial year winds down on March 31, 2019.

Briefly glancing at the company as a whole, consolidated sales fell by 10 percent to 2.4 trillion yen ($21.3 billion) and profit increased by 45 percent to 429 billion yen ($3.8 billion). 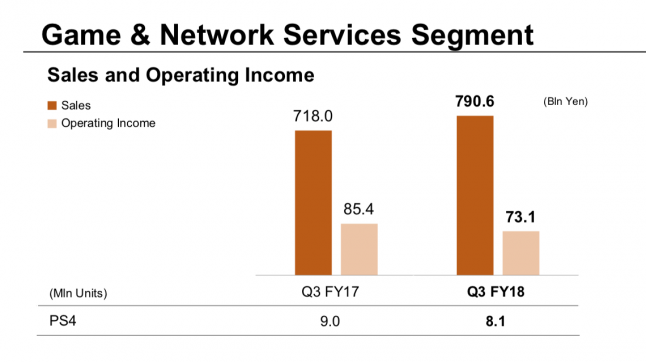