Making money from mobile games can be a granite-tough business. But by doing your research and following the numbers, you can ensure your game is geared for success.
Mark Robinson
Blogger
February 05, 2019

It’s been an incredible decade for mobile games. In just ten years, the mobile phone has risen to become the most popular games console in the world - delivering $70 billion of the games industry’s total $138 billion in revenues.

But, incredibly, this is just the beginning. Research firm Newzoo predicts that mobile games spending will rise by more than 25% in the next year alone.

While the right mobile game can make a developer a huge amount of money, the secret to success isn’t simply copying the most successful mobile games of the moment and waiting for the cash to roll in.

Obviously, for a game to make money, it needs to be good. That said, success also has much to do with the game’s monetization strategy which needs to balance great gameplay with potentially intrusive ads and monetization mechanics.

Luckily, the deltaDNA Insight team has analyzed thousands of mobile games and hundreds of millions of players. In doing some, they have gained robust insights which could form the blueprint for making a game with the primary goal of making money.

Here are the seven steps to monetization success:

1. Research your audience
When designing a mobile game it’s important to start by thinking about your target audience. If you’re looking to design a game that appeals to the largest demographic, then in North America the "typical" mobile gamer is female, aged 35-44 and professional, with 37% earning more than $75,000 in annual income.

Women also represent more than 60% of mobile game players and are effectively worth 44% more than men. This is because 4.5% of women spend money on games, compared to only 3.3% of their male counterparts. The typical Lifetime Value (LTV) for each female player is $1.57 vs. just $1.09 for every man.

So, if women are effectively worth more than men, the next question is: what type of games do they prefer to play?

The table below shows the gender split across the four broad genres we track at deltaDNA:

It is clear that women have a strong preference for puzzle games, while men prefer strategy and action games. Casino games are near gender-neutral.

Creating a game that appeals to everyone is hard, and the Free-to-Play (F2P) marketplace is brutal, so it’s unsurprising that developers choose a targeted approach. In an age where each install can cost several dollars in acquisition spend, it’s unlikely that many female-targeted First-Person Shooters (FPS) are waiting to be developed.

2) Design in the genre that has the highest ARPDAU
While it’s important to know what genre of games different demographics prefer, if we’re simply following the money, we need to know which genres generate the most revenue.

By looking at the Average Revenue Per Daily Active User, or ARPDAU, we can see that both strategy and casino games have delivered consistently high numbers for the last few years: 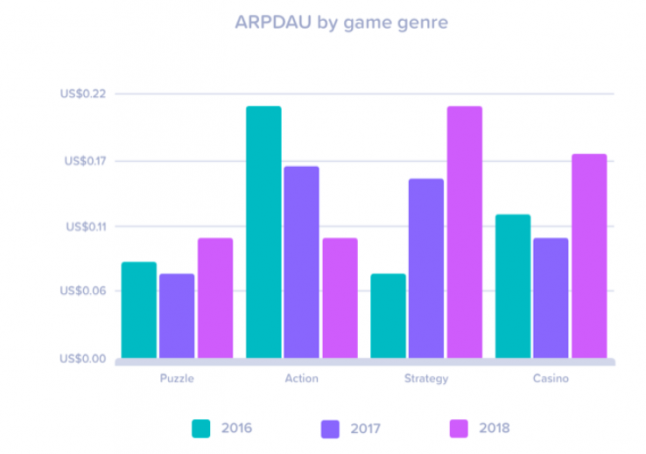 3) Be patient with your monetization
The game needs to make money, but in F2P games there’s a fine a balance to be struck between letting players become engaged with your game and losing them before you have a chance to monetize them.

Having studied the monetization mechanics of thousands of F2P games, we know that: the longer a player waits to pay, the more they will likely pay over their entire life cycle with the game. The LTV of a player is the primary metric to consider in this instance and the key is patience. Pushing too hard and too early for payment can be detrimental to game monetization. Channel your inner sloth and wait it out.

4) Don’t be too cautious with your IAP pricing

Some developers are too cautious or overly generous when it comes to utilizing monetization methods such as IAPs (In-App Purchases) or ads, and instead, place more emphasis on retention. By doing so, they are missing out on big opportunities to make money.

Making a successful game is all about striking the right balance and your IAP strategy can fail if you are not daring enough. Be brave and bold! Our data shows that games that charge twice as much tend to make roughly twice as much money. As you can see in the chart above, conversion does not decrease if the minimum price point is increased - the ARPDAU actually increases dramatically - and price points lower than $2 devalue games significantly.

5. Don’t be too generous to non-payers
By being too generous and providing lots of fun content for free, players have absolutely no incentive to pay. You will retain players for a while, but they won’t spend any money. You need a D7 retention rate of at least 10%, with 10% of these players being payers. The chart above shows that high D7 retention is no guarantee of good monetization. In fact, of the 54% of games with D7 Spenders, only 10% have 10¢ ARPDAU. 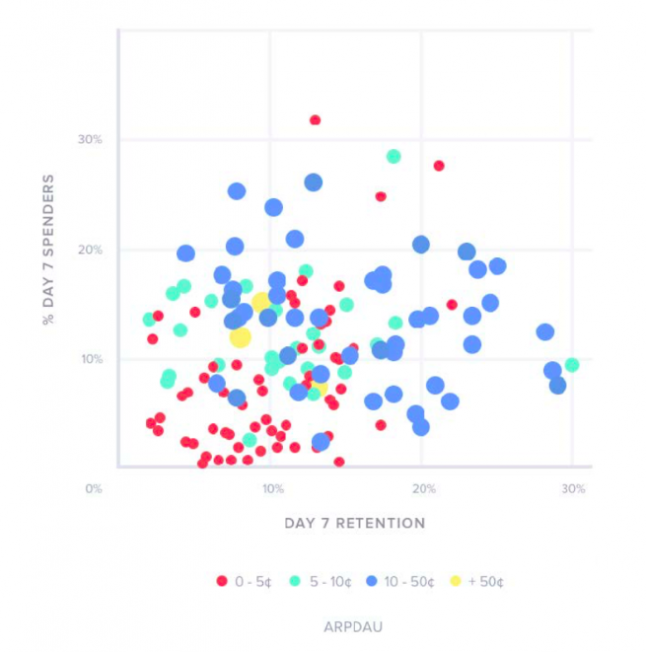 Examples of good monetization strategies can be seen in Golf Clash with well-balanced bundle offers, Star Wars: Galaxy of Heroes with gacha and collection mechanics, Clash Royale with ‘soft’ pinch points and Best Friends Forever with monetization integrated into the core reward loop.

6. Drive for repeat spending
One of the issues that many unsuccessful games have in common is that there is not enough repeat spending in the game. Many developers focus on the first spend but, it is much more profitable to establish a core spending loop within the game that encourages repeat purchases. It’s hard to get above 10¢ ARPDAU without at least 3 IAPs in the spender’s lifetime. 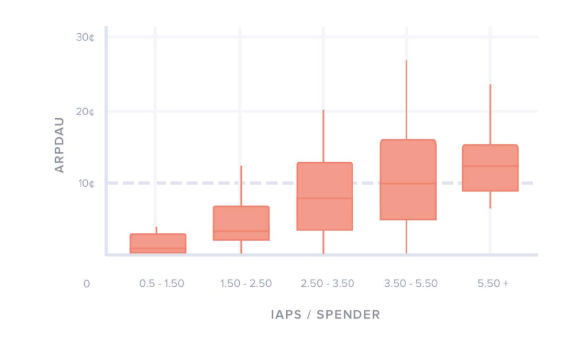 In order to drive conversion, you can choose to either ‘reward’ or ‘punish’. If you chose to use the ‘carrot’ approach you will offer a premium experience with flexible play. This will naturally lead to repeat purchase, but it can be challenging to design. If you decide to use the ‘stick’ approach you will have resource pinch points and paywalls, which are easy to construct, but they can increase churn.

7. Go Whale hunting
One of the realities of F2P is that the majority of revenue is generated by a small fraction of a percentage of the player base. They are termed Whales and we define them as players who spend more than $100 a month. These players love what you do and enjoy spending money on things that they value. 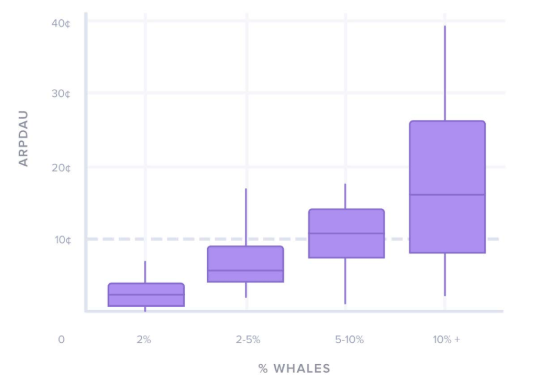 Most of your money will come from the small percentage of Whales. It is therefore crucial to identify these players quickly and build the game in order to monetize them. A minimum of 5% of your spenders must be Whales if you want to have a profitable game.

Summary
In today’s fiercely competitive mobile games market, understanding your players has never been more important - from the design stage of the game right through to the post-launch monetization strategy.

However, eye-watering revenues generated by games like Mobile Strike, Candy Crush Saga and Pokemon Go are testament to what can be achieved by games that strike the right balance.

So, if you’re a developer that’s looking to make some money from mobile games but don’t have the resources of a King or Supercell at your disposal, then our seven steps will set you in the right direction.